Home Archives Contact Us Subscribe Twitter MeWe Patently Mobile
Apple has to rethink their Open Apple Store Design as another Robbery in California occurred in Front of Customers
While LG has Revealed Plans to Slash Investments, the cuts don't apply to their Shift to OLED Displays 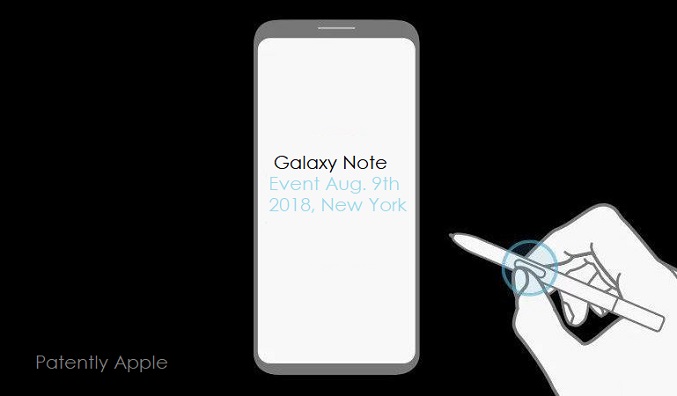 On Monday Patently Apple posted a report titled "Rumor Claims that Samsung will introduce their new AI Speaker next month at their Galaxy Note Event in New York." The Samsung Galaxy Note event is being held on August 9th.

Today, Digitimes is reporting that "Samsung Electronics is being forced to accelerate the rollout of its Galaxy Note 9 in order to rekindle its smartphone momentum as sales of its latest flagship models Galaxy S9 and S9+ have been lower than expected, according to sources from Taiwan's handset supply chain.

As the official Galaxy Note 9 launch date is set on August 9, Samsung is likely to make the availability of the new flagship also in early August, compared to the arrival in late August in previous years.

Confidence about the sales prospects of the Galaxy S9 devices among Samsung's supply chain makers has weakened recently, said the sources.

Shipments of the Galaxy S9 series products are expected to come less than 30 million units in 2018, the lowest levels for the Galaxy S-series lineup since 2012."

Last week we reported on Samsung considering a move to merge the Galaxy S-Plus and Note smartphone models to provide a stronger market offering. While no time-frame was provided for such a product, it will either happen next-year or not at all.

In order to better compete with Apple's premium iPhone model, pushing the merged Galaxy S-Plus and Note smartphone models with its pen accessory would  pressure Apple to follow the trend and bring Apple Pencil to their premium iPhone. Apple has filed patents on such a concept (one, two and three).

Samsung's motive is likely to introduce the concept before Apple naturally introduces the Apple Pencil for iPhone so that they could promote the fact that Apple is copying their innovation like they did with the phablet.