In late 2017 Reuters had reported that Apple was "in talks with Indian officials for months, seeking "pre-requisites," government tax breaks and incentives, for expanding its operations in one of the world's fastest-growing smartphone markets."

The talks appeared to be continually hitting a wall of opposition no matter how many times Apple's CEO met with India's Prime Minister Modi. In the end, if you were holding your breath for the skies to open with the Indian government showering Apple with special grants to open an iPhone plant in their country, think again.

In addition, Samsung India also launched its "Make for the World" initiative, whereby it aims to export handsets produced in India to overseas markets.

Samsung said it has been manufacturing mobile phones in India since 2007, claiming it is the "only brand that is truly made in India."

"Our Noida factory, the world's largest mobile factory, is a symbol of Samsung's strong commitment to India, and a shining example of the success of the government's 'Make in India' program. Samsung is a long-term partner of India. We 'Make in India', 'Make for India' and now, we will 'Make for the World'. We are aligned with government policies and will continue to seek their support to achieve our dream of making India a global export hub for mobile phones," HC Hong, CEO of Samsung India, said.

Samsung said it continues to provide cutting edge technology and enriching experiences to Indian consumers with its mobile phones made at the Noida plant, supported by a large ecosystem of suppliers in the Delhi-National Capital Region and partners across the country. All Samsung mobile phones, including the flagship Galaxy S9, S9+ and Galaxy Note8, are made at the Noida plant.

The announcement sounded like a loud slap in Apple's face, courtesy of Samsung with President Modi eating it all up. Currently Apple's holds an anemic 2% market share in India and the Wistron plant is only making older iPhones. 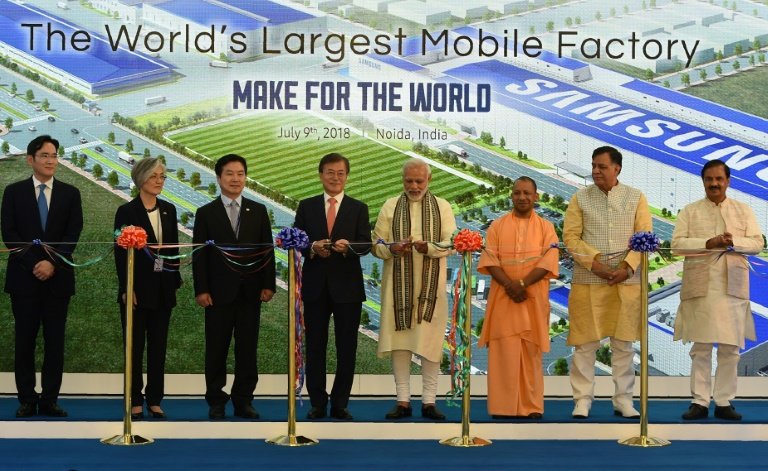 In contrast, Samsung was outsmarting and outclassing Apple on every level by wanting to make the very best phones for every segment of the Indian population instead of only for the elites. Apple wants to slowly import their ecosystem from China while Samsung is willing to build a local Indian centric ecosystem. Samsung's message was hitting all of the chords that the Indian government wanted to hear.