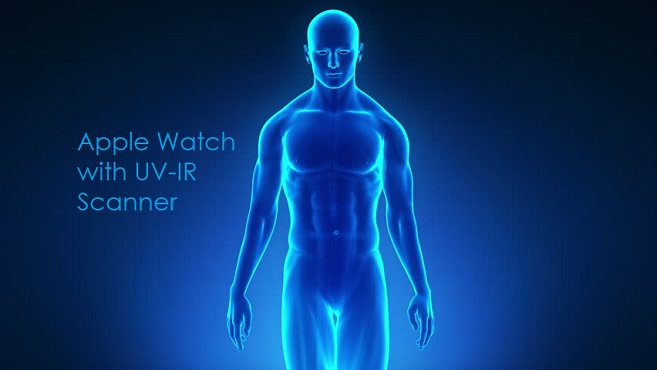 Last week the US Patent & Trademark Office published a patent application from Apple that relates to integrating a UV-IR scanner into a future Apple Watch and/or Apple Watch band to allow users to measure sufficient sunscreen protection when at the beach, boating or tanning in the back yard. While it's definitely a new health-related invention aimed at advancing Apple's focus on turning Apple Watch into a medical device – on the surface, it would appear to be a little overkill. Though knowing Apple, they'll market it to a point where you'll be convinced that it's the must feature of the day.

According to Apple, their newly invented UV-IR spectrometer may be a sunscreen detector that is configured to identify the degree of sunscreen coverage in exposed areas of the skin of a user or subject and may provide information about regions that may be at elevated UV exposure risk. The sunscreen detector may be configured to indicate areas of skin or entire body parts where sunscreen protection is missing or inadequate. Based upon the detected sunscreen coverage, the detector may provide notifications or instructions to the user about where to apply or re-apply sunscreen, and/or how much and how often to apply sunscreen. 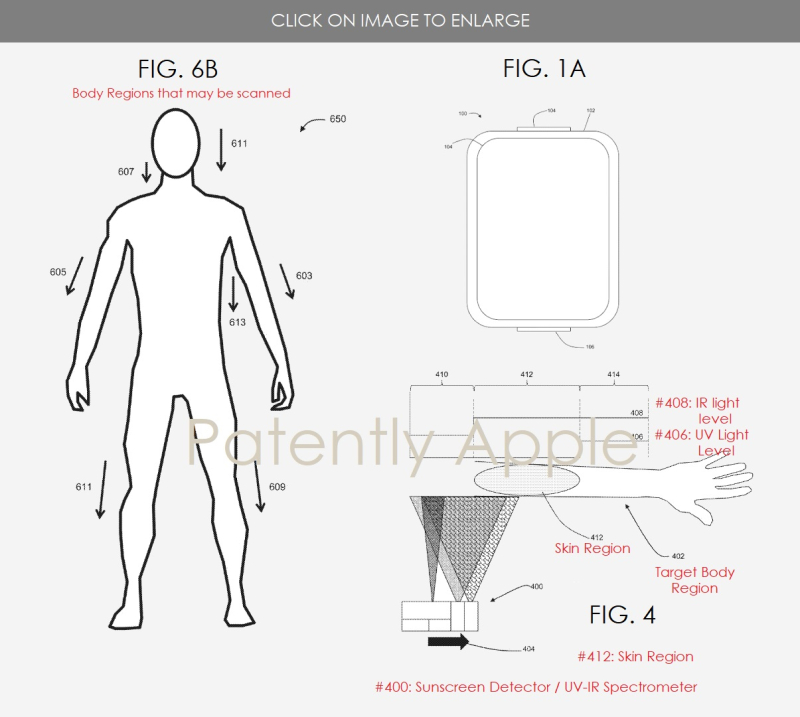 Apple's patent FIG. 4 conceptually depicts the output of a sensor system of a UV-IR spectrometer as scans a target tissue region; FIG. 6B is a schematic of body regions that may be scanned.

Apple further notes that in some variations, the UV-IR spectrometer may be located within the body of a band or wrist-worn device (e.g., a fitness tracker and/or a watch) as depicted in FIG. 1A.

The band or wrist-worn device may not have a native camera unit. For example, a UV-IR spectrometer may be integrated with a watch and enclosed in the housing of the watch body, or it may be located within the wrist band. Though remember that Apple has a number of patents about adding a camera to a future Apple Watch and/or band.

In other possible variations, a UV-fit spectrometer located in a watch or on a wrist band may comprise a visible light source (e.g., an LED) which may help to guide the user as the spectrometer is scanned over a target skin region.

As the visible light shines on a particular skin region, the controller of the UV-IR spectrometer outputs a visual indication to the watch that conveys to the user whether sufficient sunscreen was applied to the illuminated skin region.

In some variations, the UV-IR spectrometer may generate a status sound or beep as it is moved across the target body region, which the pitch or frequency of the sound may vary according to the amount of UV light that is absorbed or reflected at a particular location.

Alternatively or additionally, the UV-IR spectrometer may have one or more indicator lights that may change color or pulse frequency according to the amount of UV light detected by the sensor.

A user may utilize the UV-IR spectrometer or sunscreen detector before, during, and/or after exposure to the sun. UV and/or IR data acquired prior to sun exposure may be used to calibrate the UV-IR spectrometer, and/or may also be used in a computer-implemented method to generate recommendations to the user regarding the SPF, quantity, and application frequency of sunscreen.

After sun exposure, a user may scan their skin in order to gauge whether they have been exposed to excessive UV rays. Post-exposure scans may also advise a user of early phase or onset of sunburn, so that the user may take early action to treat the symptoms of sunburn.

Apple's patent FIG. 5 below is a flow diagram of one variation of a calibration protocol. 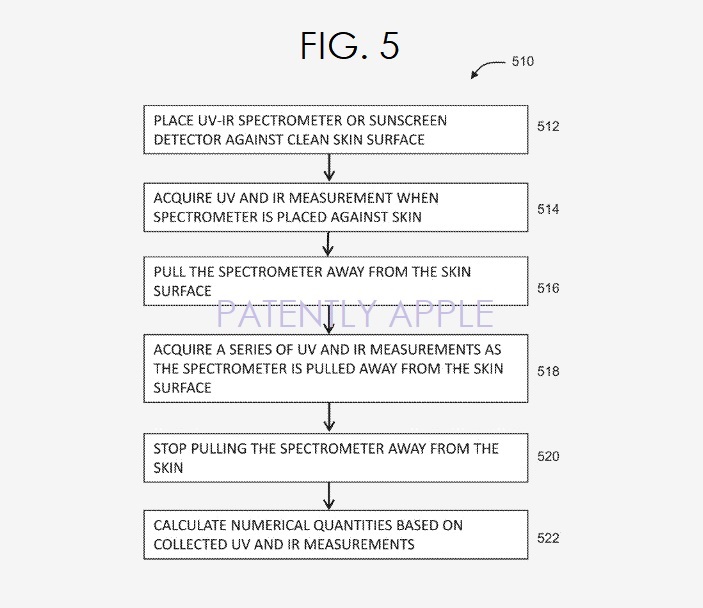 Lastly, Apple points to data privacy. Apple notes that "The UV and IR light data acquired during one or more calibration procedures and/or scan procedures, along with the user skin characteristics may be transmitted to the controller of the mobile and/or wearable device with which the UV-IR spectrometer is integrated. The controller may store this data in non-transitory computer-readable media ("memory"). Optionally, this data may be accessible to other applications and computer-implemented methods stored on the memory. The accessibility of this data to other computer-implemented methods may be determined by privacy preferences set by the user.

Apple's patent application 20180202927 that was published last Thursday was originally filed back in December 2017. Considering that this is a patent application, the timing of such a product to market is unknown at this time.