Home Archives Contact Us Subscribe Twitter MeWe Facebook Patently Mobile
Apple's Controversial Store Location in Sweden Undergoes a Second Round of Public and Government Consultations
The U.S. Patent Office has Granted Samsung a Patent for a Biometric Camera that could be used in 2019 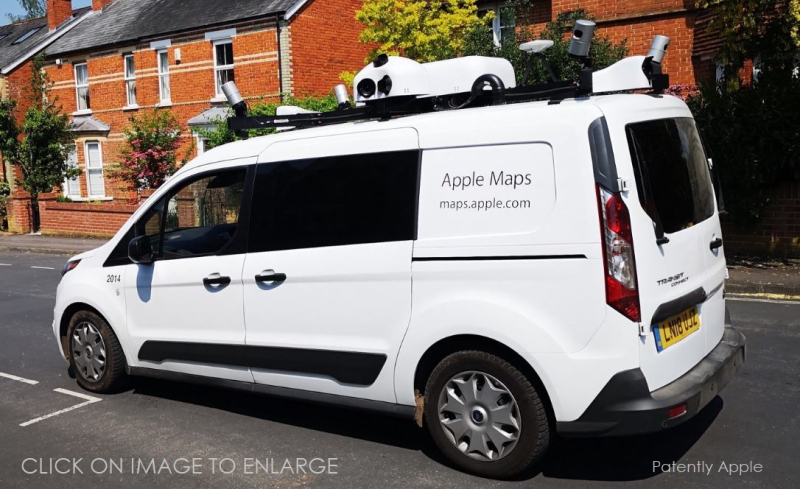 Last Friday a report revealed that for the first time Apple will roll out a more detailed maps app built from its own data. Apple is doing this by using first-party data gathered by iPhones with a privacy-first methodology and its own fleet of cars packed with sensors and cameras. The new product will launch in San Francisco and the Bay Area with the next iOS 12 beta and will cover Northern California by fall.

The TechCrunch report revealed that "Every version of iOS will get the updated maps eventually, and they will be more responsive to changes in roadways and construction, more visually rich depending on the specific context they're viewed in and feature more detailed ground cover, foliage, pools, pedestrian pathways and more.

This is nothing less than a full re-set of Maps and it's been four years in the making, which is when Apple began to develop its new data-gathering systems. Eventually, Apple will no longer rely on third-party data to provide the basis for its maps, which has been one of its major pitfalls from the beginning.

Eddy Cue told TechCrunch that "We have been working on trying to create what we hope is going to be the best map app in the world, taking it to the next step."

At the moment, Google is the only company on the planet that owns an entire map stack from the ground up. It explains why Google Maps is currently superior and more accurate that Apple's Maps app. Apple's all-new maps will now go head-to-head with Google Maps.

Apple also has a consistent message regarding privacy. Apple's team feels it can deliver a high-quality navigation, location and mapping product without the directly personal data used by other platforms.

In the end, Apple will reportedly deliver better road networks, more pedestrian information, sports areas like baseball diamonds and basketball courts, more land cover, including grass and trees, represented on the map, as well as buildings, building shapes and sizes that are more accurate. A map that feels more like the real world you're actually traveling through.

Search is also being revamped to make sure that you get more relevant results (on the correct continents) than ever before. Navigation, especially pedestrian guidance, also gets a big boost. Parking areas and building details to get you the last few feet to your destination are included, as well.

The new Maps app won't be available to those outside the U.S. at kick off. In fact it will be rolling in segments over the next year. Eddy Cue stated that "We don't think there's anybody doing this level of work that we're doing. We haven't announced this. We haven't told anybody about this. It's one of those things that we've been able to keep pretty much a secret. Nobody really knows about it. We're excited to get it out there. Over the next year, we'll be rolling it out, section by section in the U.S."

If Maps is an area of interest to you, you check out the full TechCrunch report here for more details.

In a new report published today by Counterpoint Technology Market Research titled "Apple's Audacious Bet to Build its Own Maps. Too Little Too Late?," they provide us with a chart (below) breaking out Map leaders, regional champions and Niche Players.

The leaders are shown to be HERE, Google and TomTom. Apple currently falls into the third camp of "niche players" and is in fact listed as being tied for last place with Navitel. Apple currently licenses mapping content from TomTom. 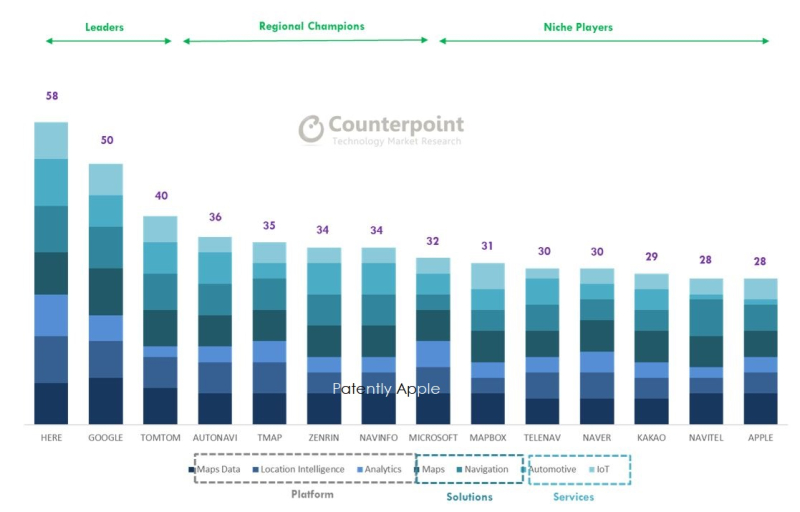 Counterpoint's report, written by Research Director Neil Shah, points to a number of pros and cons regarding Apple's new Maps app. Below are just a few of the points: