Google, Facebook, Microsoft and Twitter Bang the Drum in Unison for the Data Transfer Project that Nears Completion

The Data Transfer Project (DTP) was formed in 2017 to create an open-source, service-to-service data portability platform so that all individuals across the web could easily move their data between online service providers whenever they want.

The contributors to the Data Transfer Project believe portability and interoperability are central to innovation. Making it easier for individuals to choose among services facilitates competition, empowers individuals to try new services and enables them to choose the offering that best suits their needs.

Today the DTP revealed its plans for an open source data portability platform any online service can join. You could review and download their detailed White Paper here. The images below are from that paper. 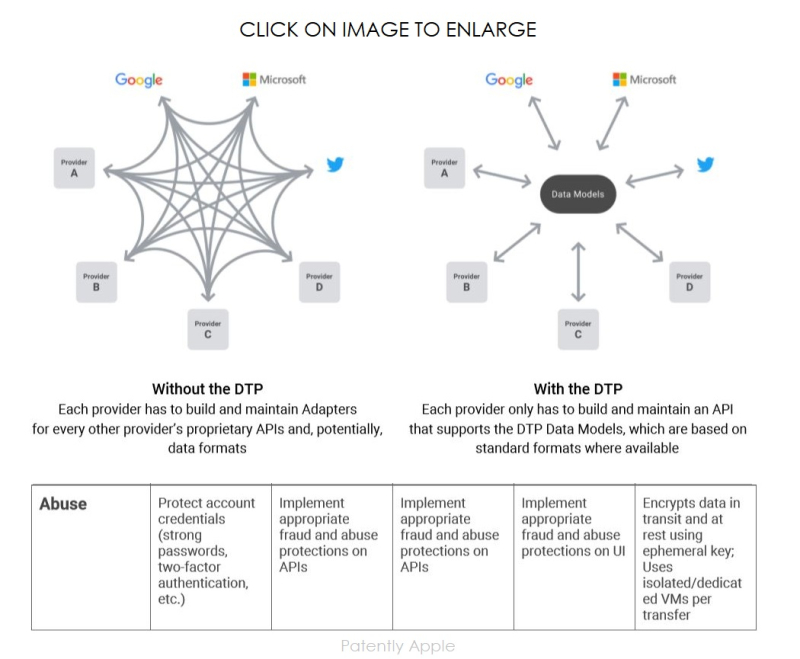 How does it work?

The Data Transfer Project uses services' existing APIs and authorization mechanisms to access data. It then uses service specific adapters to transfer that data into a common format, and then back into the new service's API. Learn More

What are some use cases?

There are many use cases for users porting data directly between services, some we know about today, and some we have yet to discover. A couple of examples of ones we know users want today are:

How to try it out

DTP is still in development and is not quite ready for everyone to use yet. However if you want to give it a shot we have a couple methods you can try out:

Note: For both of these you need to get your own API keys from the services you want to port data between; please see instructions for getting keys.

Google has posted about DTP on their Google Open Source blog here and Facebook touches on it here.

In a report by The Verge on this development, they added that "The specter of Cambridge Analytica puts a real limit on how much data companies are willing to share. When I asked about the data privacy implications of the new project, Facebook emphasized the importance of maintaining API-level controls.

"We always want to think about user data protection first," says David Baser, who works on Facebook's data download product. "One of the things that's nice about an API is that, as the data provider, we have the ability to turn off the pipeline or impose conditions on how they can use it. With a data download tool, the data leaves our hands, and it's truly out there in the wild. If someone wants to use that data for bad purposes, Facebook truly cannot do anything about it."

At the same time, tech companies are facing more aggressive antitrust concerns than ever before, many of them centering on data access. The biggest tech companies have few competitors. And as they face new questions about federal regulation and monopoly power, sharing data could be one of the least painful ways to rein themselves in.

It's an unlikely remedy for companies that are reeling from data privacy scandals, but it's one that outsiders like Open Technology Institute director Kevin Bankston that has been pushing for this."

There's no official word from Apple about the project or whether they intend to participate and/or contribute to it at a later date.

Any consumers who feels locked into any particular tech company's ecosystem will most definitely welcome the ability to easily switch from one service to another effortlessly.

Update 12:15 p.m. PST: PCWorld writer Michael Simon chimed in on this subject and thinks that without Apple's participation the project is likely doomed. Simon notes that "For anyone who’s ever switched from Spotify to Apple Music, this is a dream come true. No longer will months of curation need to be sacrificed just to try out a new service. But for a project like this to work, it needs the support of the biggest and the smallest developers alike. And the biggest name that isn’t on this list is Apple. If the Data Transfer Project works with Google accounts and not iCloud, or Spotify and not Apple Music, it’s never going to become as seamless as it needs to be."

Elsewhere Simon states: "while the four founding members are certainly big enough to get the Data Transfer Project off the ground, it’s missing the support of the biggest player of all: Apple. And without the iPhone maker on board, it’s going to be a tougher sell than it should be."

For more, check out PCWorld's report titled "The Data Transfer Project’s big-name support won’t matter without the biggest one: Apple."

What do think about the new Data Transfer Project? Send in your comments below.