Apple's iPhone 8 was the #1 Smartphone Worldwide in May

Last month Patently Apple posted a report titled "Five out of the Top Ten Smartphones were iPhones in April with Samsung's S9 Finally Edging Out Apple's iPhone X for Top Spot." For the month of May, Apple is still winning the smartphone race globally, yet with a completely different mix in leadership.

A new report by Counterpoint covering smartphone sales statistics for May has Apple as the winner with 3 entries this month as opposed to 5 models last month. 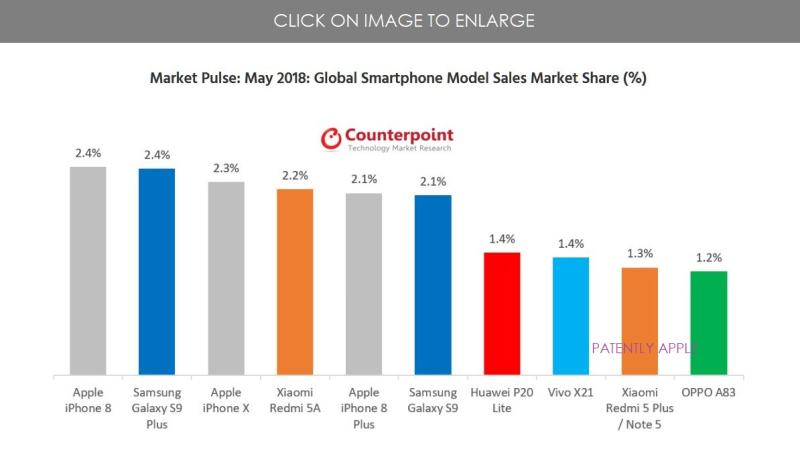 Apple's iPhone X took the third spot while the iPhone 8 Plus took the fifth spot. Sales of the iPhone 7 fell out of the top 10.

Counterpoint noted in their report that "Apple regained the top spot in the global best selling smartphone list with the iPhone 8. Strong promotions ("How to shoot on iPhone") running up to the football (soccer) World Cup helped the tech giant to trigger buyer interest in Europe and other markets. iPhone 8 sales were steady in the US postpaid channels."

Apple's iPhone promo for taking great soccer shots was for iPhone X  (+ shoot in Slow-Mo, Burst Mode and how to shoot using backlight).