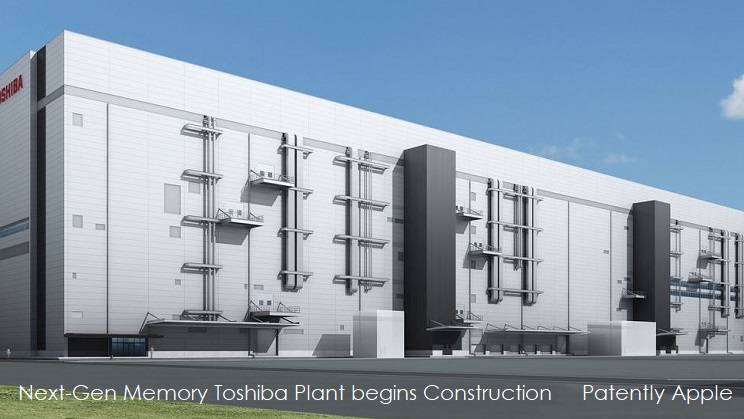 A last minute Bain Capital offer to acquire Toshiba's Memory Chip business last year included Apple joining their bid. On June first the deal was officially completed. Last week the Financial Post reported that Toshiba has started construction on a next generation fab in Kitakami City, Japan. It will reportedly be completed by autumn 2019 dedicated to the production of its proprietary 3D flash memory known as BiCS FLASH.

The Financial Times further noted that "The new facility will not only be the largest Toshiba Memory fab, but it will be the most advanced as well. It will be constructed with a seismic isolation structure that allows it to absorb earthquake tremors, and it will reduce environmental loads by deployment of the latest energy-saving manufacturing facilities. It will also introduce an advanced production system that uses artificial intelligence (AI) to boost productivity."

In Febuary the Nikkei Asian Review reported that Apple was in talks with state-backed Yangtze Memory Technologies to buy NAND flash chips from it, a move that will mark the U.S. giant's first purchase from a Chinese memory chipmaker and a huge boost to the local sector.

Apple is currently purchasing NAND flash memory chips for its iPhones from Toshiba of Japan, Western Digital of the U.S., SK Hynix and Samsung Electronics of South Korea.

Apple is the world's biggest consumer of these chips, taking roughly 15 percent of overall global demand of 160 million GB in 2017, according to Sean Yang, an analyst at a Shanghai-based research company CINNO. Due to the pricing fluctuations of NAND flash memory, it will be seen as a key move for Apple if it brings the manufacturer on board."

With Apple being one of the key players in the Bain Capital bid for Toshiba, Apple is likely to extend their relationship with Toshiba once the plant is fully operational or work with other partners working with Toshiba such as Hynix.

Demands on smartphones on future 5G networks are likely to push next-gen thermals and next-gen memory and Toshiba's 3D BiCS FLASH may be what Apple may be eying for their 5G ready premium iPhones.