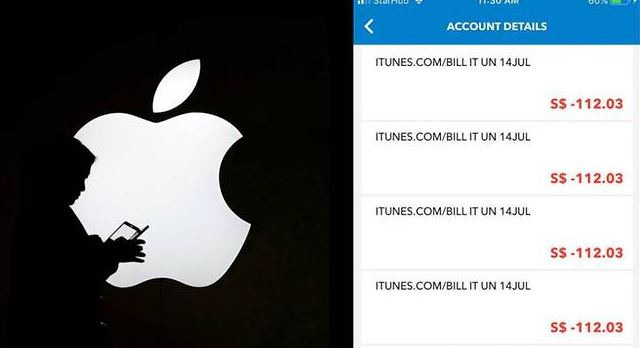 It's being today that Dozens of Apple customers have had hundreds of dollars each drained from their bank accounts, after being billed for purchases they did not make on their iTunes accounts, reports Channel NewsAsia. The victims in Singapore that spoke to the Asian publication stated that the charges were deducted from their accounts at DBS and Oversea-Chinese Banking Corporation (OCBC).

Two people told Channel NewsAsia that they lost at least S$7,000 each to iTunes purchases with one saying she was billed on her HSBC credit card. She added that she only realized something was amiss when she received a text message from HSBC that she had less than 30 per cent of her credit limit left. She realized the extent of the issue after speaking to a customer service operator.

At OCBC alone, there were 58 cases of fraudulent transactions in July, the bank told Channel NewsAsia. Upon confirmation that these were fraudulent transactions, the bank deployed the necessary counter-measures and are currently assisting the affected cardholders via the chargeback process," said Mr Vincent Tan, head of credit cards at OCBC Bank. For more on this read the full report here.