Home Archives Contact Us Subscribe Twitter MeWe Facebook Patently Mobile
At the End of the Day: A Round-Up of other Apple and Technology Stories for July, 11, 2018
Apple Invents Next-Gen Smart Fabrics with Insulated Conductive Strands for a Wide Range of Future Products

Advanced Voice Recognition Systems, Inc. ("AVRS") announced today in a press release that it has filed a lawsuit in the United States District Court-Northern District for Arizona against Apple for infringement of U.S. Patent #7,558,730 entitled "Speech Recognition and Transcription Among Users Having Heterogeneous Protocols" (the "'730 Patent"). The '730 Patent is the first of AVRS' family of patents in the field of speech recognition and transcription. 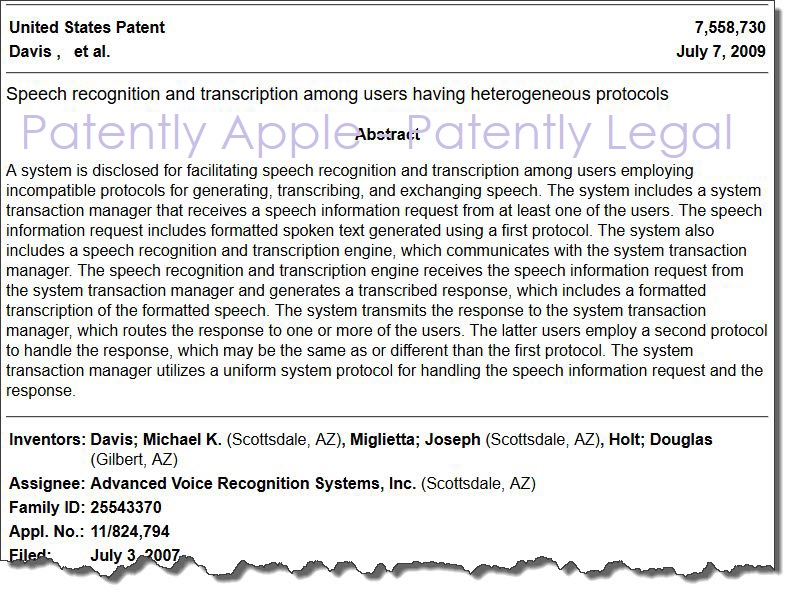 The complaint asserts that Apple's Siri, a voice-activated intelligent assistant which provides, among other things, voice recognition and natural language understanding solutions, and which is included in many Apple products such as the iPhone, iPad, Mac, Apple Watch, the Apple HomePod and the iOS, macOS, watchOS and tvOS operating systems, infringes the '730 Patent.

President and CEO of AVRS, Walter Geldenhuys, stated, "We believe our patents are among the most valuable of our assets and we intend to vigorously enforce our rights." Geldenhuys commented that "AVRS offered Apple a license to the '730 Patent but Apple refused to take one and we felt that this left us no choice but to file a lawsuit."

AVRS sued Microsoft in 2012 and the company's only activities appear to be filing patents and suing companies.