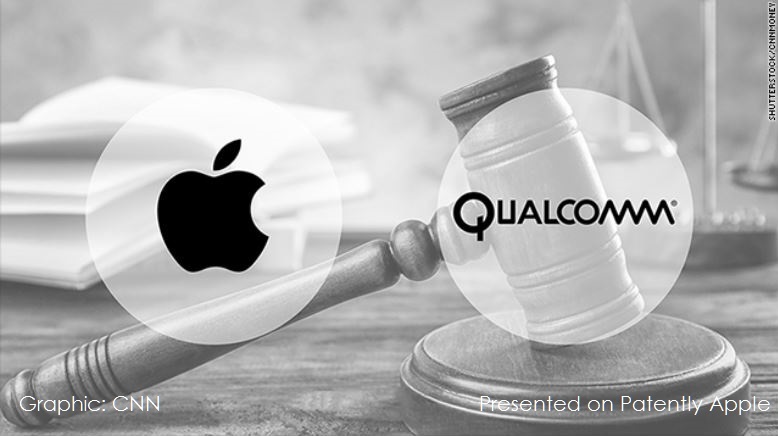 It's being reported today that after more than a year of vicious accusations and a flurry of lawsuits and counter claims, Apple Inc. and Qualcomm Inc.'s multi-billion-dollar legal dispute is about to get serious. Hearings in the three most important markets -- the U.S., China and Germany -- will soon determine whether Apple's attempt to save itself billions in technology licensing payments by forcing one of the world's biggest chipmakers to change the way it does business is legal.

Apple may be the hook for $2.5 billion to $4.5 billion in unpaid fees, based on estimates for the amount per phone the company may be charged, a total that could be equivalent to about one-fifth of Qualcomm's annual revenue. The iPhone maker has argued that Qualcomm uses its ownership of patents that cover the basics of how modern smartphones communicate to extract unfairly high payments and coerce it into buying chips. The chipmaker has countered that Apple is stealing its property by refusing to hand over fees for technology that the rest of the industry values and pays for.

The companies' legal teams have been busy and are likely to stay that way. There are more than 50 separate intellectual property and antitrust proceedings filed across 16 jurisdictions in six countries, according to Bloomberg Intelligence analyst Matt Larson.

While no single case will resolve everything, a number of decisions in the second half of 2018 may create an incentive to settle, Larson wrote in a recent research note

Next week the International Trade Commission in Washington will begin a hearing on Qualcomm's argument that Apple is infringing three patents. Qualcomm is asking the agency to ban imports of all iPhone 7 models that don't have Qualcomm's chips. The iPhone, which provides Apple with more than 60 percent of its sales, is manufactured in Asia.

And in China, the biggest market for smartphones, the Chinese Patent Review Board begins hearings this month and next to consider Apple's request to invalidate patents that Qualcomm is trying to use against it. Decisions in those cases could come in the third quarter, according to Larson.

For Apple to shift its position "some government entity or court would have to be willing to put an injunction on the iPhone," said Matt Ramsay, an analyst at Cowen Inc. Absent that, "I get the sense that this Apple thing could go on for quite a while."

The battle between Apple and Qualcomm has been raging on since 2017. Below is a list of reports that Patently Apple posted in 2017 covering this ongoing war.

Nov 30, 2017: Qualcomm Wastes no Time in Retaliating against Apple with another Patent Infringement Lawsuit filed in California