In late April Patently Apple posted a report titled "Intel may be able to grab the Lion's Share of Apple's iPhone modem Business in 2018 if Chip Yields can improve." The report noted that the modem-chip yield rates weren't what Intel expected. Just a little more than half of the chips being produced were actually keepers. Yet Intel engineers were confident they could work the bugs out and push up the yield rates before production ramps into high gear in June and July.

Now that Intel's full production season has begun on cue, a new Nikkei Asian Review report is claiming that Intel has started production of modem chips that will go into Apple's upcoming iPhones later this year.

"Most market watchers believe Intel could secure a majority of orders to provide its latest modem chip, the XMM 7560, for the new iPhones, which will debut later this year," as we reported on earlier this year.

Keddy was quick to point out that the XMM 7560 modem chip was a 'milestone' for her company, as it supports code division multiple access, or CDMA, a type of communications technology. The development is aimed at completing the chipmaker's reach to global users, as its previous products could not access some major telecom operators' networks, including Verizon and Sprint."

The chart below clarifies that Intel's XMM 7560 modem chip is a pure LTE modem and that Intel's pure 5G modem chip, the XMM 8060, will launch sometime in 2019. 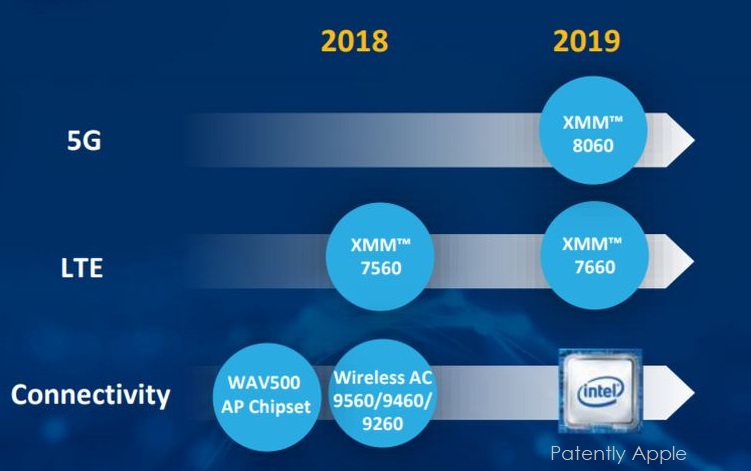 You could learn more about the 2018 XMM 7560 Advanced Pro Modem here that describes delivering speeds up to and beyond 1Gbps.

Qualcomm has signed on 18 Global OEMs to support Qualcomm's X50 5G NR modems in 2018 as noted in the chart below. 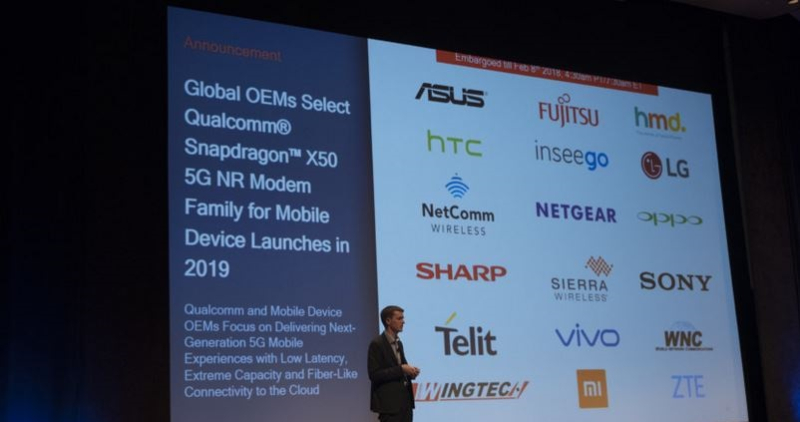 For Intel, gaining Apple's business is a huge boost for them. If they deliver a top quality 5G modem chip next year they know that some of those 18 OEMs could be persuaded to switch supplier. Apple's 2019 iPhones using Intel's 5G modem will be their largest living advertisement.

Keddy added that "Intel's next-generation 5G modem offering, dubbed the XMM 8060, will be available next year and will likely be first found in fixed wireless products for telecom operators; connected personal computers made by HP, Dell, Lenovo Group, Asustek Computer and Acer; and in smartphones."

Patently Apple covered Intel's Computex keynote in Taiwan on June 5th where they elaborated on what Intel's Keddy noted in the Nikkei's report. Below are screenshots from the keynote on the topic of 5G ready 2-in-1 devices coming in 2019. 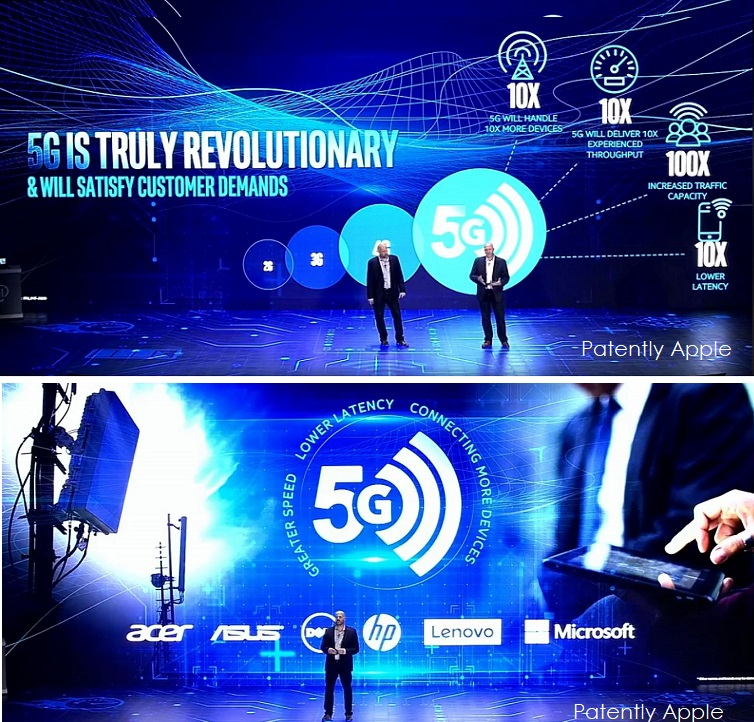 Intel noted during their keynote that "As we pave the way for 5G, expect us to deliver 10 more 4G-connected PCs from partners like Acer, Asus, Dell and HP – on top of the 25 currently in market. These always-connected PCs are not only sleek and beautiful, but packed with performance."

Here's to hoping that Apple's iPad Pro will be on time to compete with this new wave of 5G ready PC 2-in-1 devices.

On a last note, the Nikkei report quoted Keddy stating that "5G is one of the biggest bets for Intel and we look it as a system and with a systematic approach. It's really the conversion of computing and communication technology. The phone is only a step [for diversification] ... And we look way beyond only phones." For more on this story be sure to check out the full report at The Nikkei Asian Review

What will be interesting to follow is whether or not the Samsung Galaxy S10 launching in late February 2019 will be the first smartphone to include a 5G modem. Some think it could be sooner.

Park Jin-hyo, who serves as the Chief Technology Officer of SK Telecom, said that Samsung has made a lot of progress in its 5G technologies and will make a 5G phone soon. He made these remarks while talking to journalists at the MWC 2018 trade show in Barcelona.

Jin-hyo specifically stated that "It is not so far for Samsung either in coming up with a 5G device." Huawei has recently announced its first 5G chipsets too and said that it will release a 5G smartphone in the second half of 2018. Park also said: "Huawei excels in its technologies…While Samsung may not say much, it has also been making a lot of preparations."

To learn more about Intel's push into 5G, read their latest report titled "The Dash to 5G Commercialization Begins" here.