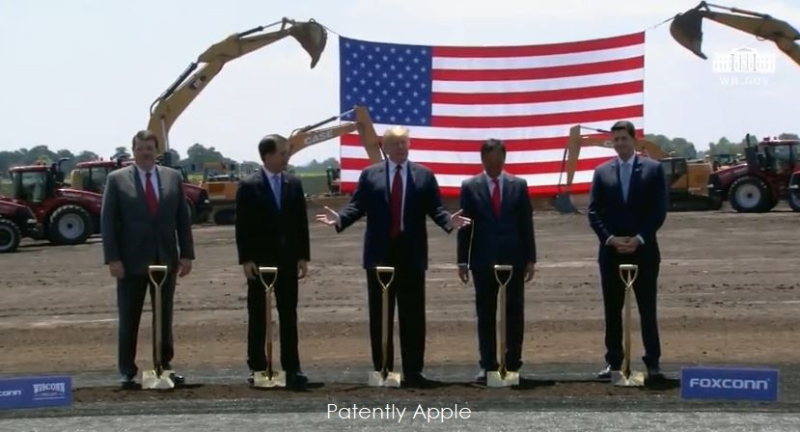 Last July Foxconn's Terry Gou was at a press conference at the White House to announce their plans to invest $10 billion dollars in the state of Wisconsin to make LCD displays up to 8K for the auto, healthcare and entertainment industries. Yesterday Foxconn Electronics held its groundbreaking ceremony for the new LCD display panel plant in Wisconsin. Foxconn Chairman Terry Gou was in attendance along with US President Donald Trump, Wisconsin governor Scott Walker and Speaker of the United States House of Representatives Paul Ryan.

Foxconn is promising to hire 13,000 workers for the plant in the coming years. Before kicking off the construction of the new plant, Foxconn has already geared up its efforts venturing into the TV market in the US, according to industry sources.

Foxconn is likely to foray into the US TV market using a dual brand strategy.

After a period of deadlock, Foxconn, now the parent company of Sharp, has resumed negotiations with China-based Hisence, aiming to buy back the selling right of Sharp-brand TVs in the US, according to Chinese-language Economic Daily News.

A Nikkei Asian Review report further indicated that the parties are now negotiating toward having Sharp restart production of high-end TVs, such as those with ultra-high definition 8K or 55-inch and above sizes of TVs, while leaving the mass-market small- and medium-size models to Hisense.

If the negotiations go smoothly, the Wisconsin plant will be able to produce Sharp-brand TVs for sale in the US market, the sources indicated.

Later in the day Foxconn's Chairman Terry Gou and other officials show President Trump the overview of Foxconn's plans for the plant.