The first series of patent applications relating to an Apple Watch doubling as a blood pressure device surfaced in November. One was titled "Blood Pressure Monitoring using a multi-function wrist-worn device. The Apple Watch was highlighted during the WWDC 2018 keynote. Apple's CEO highlighted how Apple Watch 3 was used to call for help in an emergency that saved a life. You could watch that segment of the keynote that begins at the 1:05:37 mark. 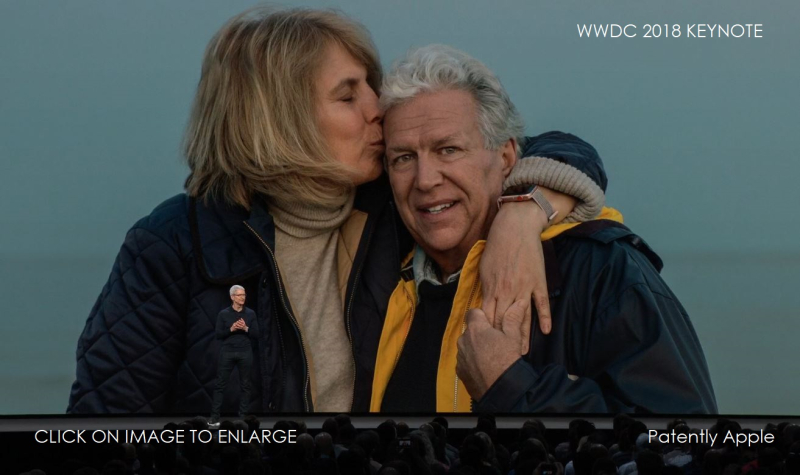 Today the US Patent & Trademark Office published a new patent application from Apple that builds on Apple's invention that could bring a custom Apple Watch band to market that is designed to take a user's blood pressure.

Apple notes that "A low-profile blood pressure measurement system and methods of use are disclosed. The system includes an expandable member that has a multi-compartment structure and/or is mounted on a rigid surface or structure. The system may be incorporated into a portable electronic device, or may be configured for use with, or to otherwise communicate with a portable multi-function device."

High blood pressure or hypertension is common medical condition, yet it often goes undetected or untreated. According to the Centers for Disease Control, 1 in 3 adult Americans have hypertension, and only about half of those diagnosed with the disease are under adequate blood pressure control.

The actual measurement of blood pressure can vary with a number of factors, including recent activity, body position at the time of measurement, ingested substances such as alcohol and caffeine, and current stress levels. Even the presence of a patient at a doctor's office can transiently increase blood pressure, a phenomenon known as "white coat hypertension".

To obtain a more reliable and/or accurate assessment of a patient's blood pressure, a patient may be asked to periodically check and record their blood pressure at home, or to even wear an ambulatory blood pressure monitoring (ABPM) device for a period of time, typically a single 24-hour period. The ABPM device is often programmed or configured to inflate at intervals, e.g. every 15-20 minutes during the day, and every 20-30 minutes at night).

Blood pressure measurements may be performed in number of ways. In the ausculatory method, a pressure cuff is placed around the arm and is inflated sufficiently to occlude the brachial artery. The pressure is then decreased gradually and a stethoscope is used to detect Korotkoff sounds. The Korotkoff sounds are the result of turbulent flow through a partially occluded artery, and the pressures corresponding to the onset and cessation of the Korotkoff sounds are the systolic and diastolic blood pressures, respectively.

In the oscillometric method (also see: korotkoff Sounds vs. Oscillometric BP measurement), the onset and cessation of pulsatile pressure changes sensed in the cuff to determine the systolic and diastolic blood pressure.

In the applanation tonometry method, a pressure sensor is placed against an artery to slightly flatten the artery against the underlying anatomical structures, so the pressure waveform can be directly measured. The central venous pressure and the systolic and diastolic pressures can then be determined from the waveform.

Apple's invention covers a low-profile blood pressure measurement system and methods of use are disclosed. The system includes an expandable member that has a multi-compartment structure and/or is mounted on a rigid surface or structure. The system may be incorporated into a portable electronic device, or may be configured for use with, or to otherwise communicate with a portable multi-function device.

Apple's patent FIGS. 1A and 1B below are posterior and anterior views of an exemplary blood pressure measurement system worn on the wrist. 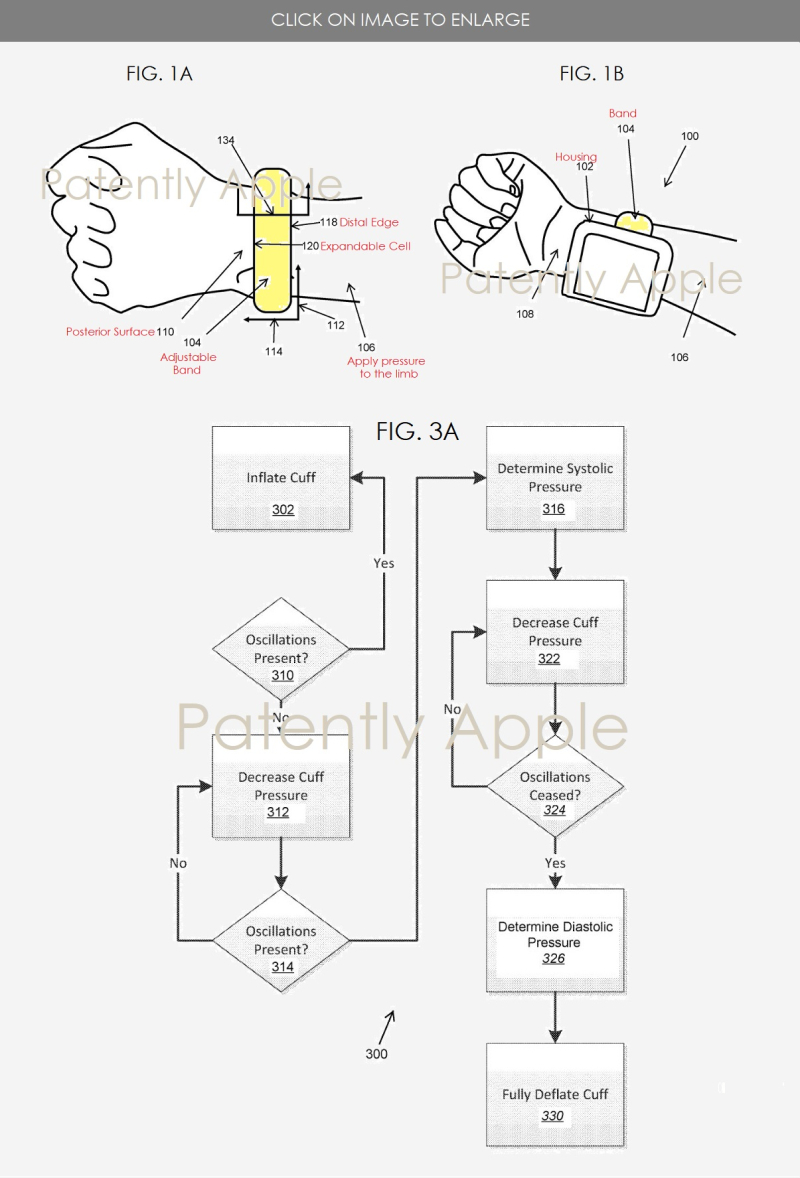 Apple's patent FIG. 3A presented above is a block diagram illustrating an exemplary controller configuration of a system. 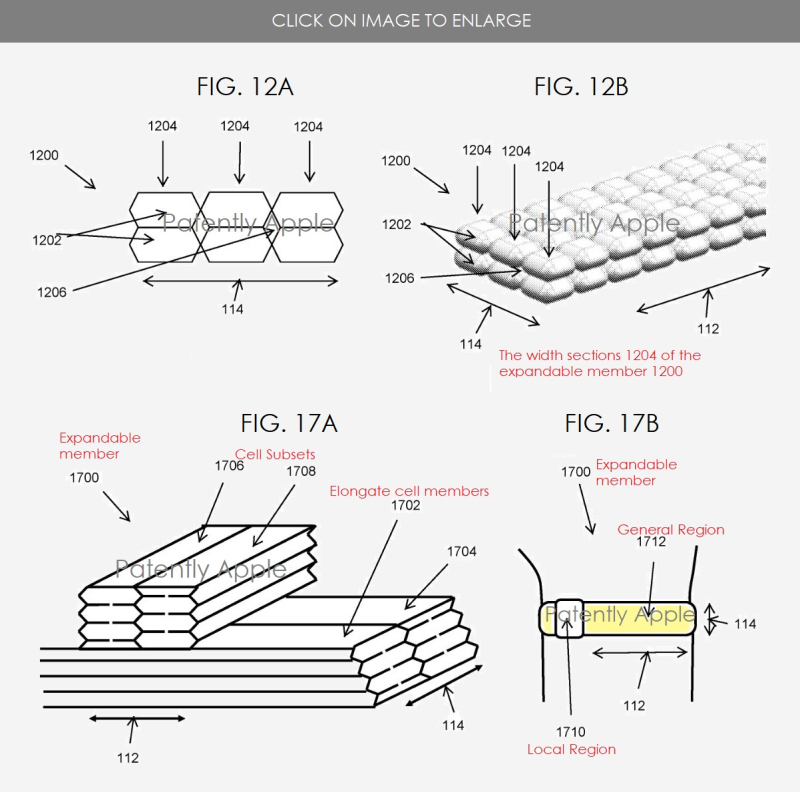 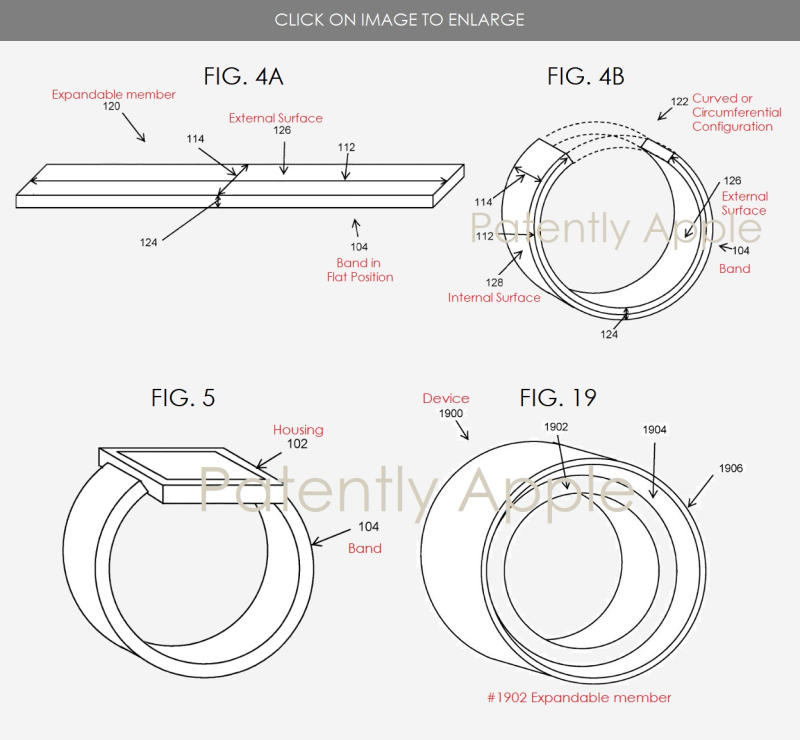 In some examples of the blood pressure measurement device, the device may further comprise a support member to facilitate the application of force by the expandable member. In FIG. 19, for example, the device #1900 comprises an expandable member #1902 that is mounted on an inner surface #1904 of a support member #1906. The support member may comprise rigid or semi-rigid materials, including but not limited polyethylene terephthalate (PET), high density polyethylene (HDPE), polyvinyl chloride (PVC), polypropylene (PP) and polystyrene, or a metal, for example.