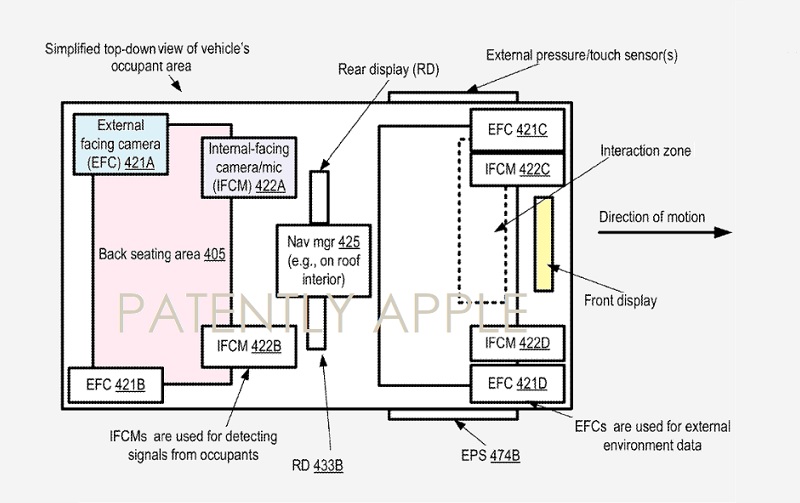 Today the US Patent & Trademark Office published a patent application from Apple that relates to systems and algorithms for using various types of signals from authorized Drivers for controlling the motion of autonomous or partially autonomous vehicles. Considering that the patent was only filed 7 months ago, it would appear that Apple's Project Titan may be thinking beyond mere shuttle craft.

Apple notes that motorized vehicles which are capable of sensing their environment and navigating to destinations with little or no ongoing input from occupants, and may therefore be referred to as "autonomous" or "self-driving" vehicles, are an increasing focus of research and development. Given the multiplicity of choices that are typically available with respect to vehicle trajectories in real-world environments, occupant input or guidance with regard to selecting vehicle trajectories (without requiring traditional steering, braking, accelerating and the like) may be extremely valuable to the motion control components of such vehicles. However, providing interfaces for such guidance which are intuitive and easy to use, especially within environments such as parking lots for which detailed and/or accurate mapping data may not be available, may present a non-trivial challenge.

Apple's patent FIG. 1 below illustrates an example system environment in which movements of an autonomous vehicle in the vicinity of a destination may be guided at least partly by intent signals provided by an occupant of the vehicle. 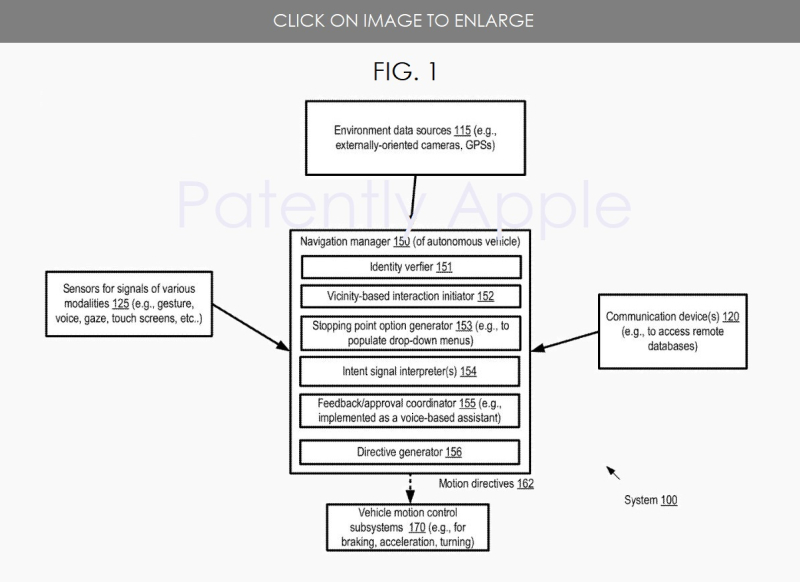 In at least some embodiments (FIGS. 2 and 3 below), a method may comprise obtaining, at a navigation manager implemented using one or more computing devices, an indication of a destination of a vehicle (such as a large retail store, an office complex, a shopping mall or the like), where the vicinity of the destination comprises numerous vehicle stopping points (such as parking spaces). 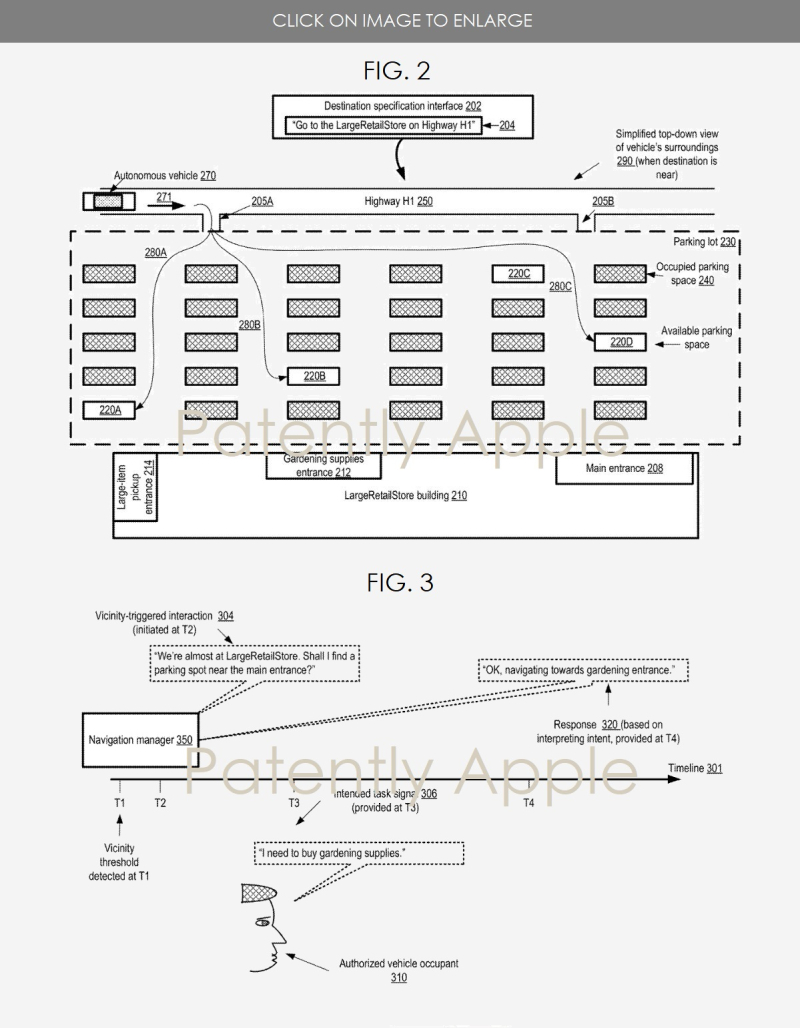 Any of a variety of signal modalities and/or interfaces may be used singly or in combination to discover the intent of the authorized individual in various embodiments. For example, in some cases, the individual may gesture towards an intended parking space in a parking area, and combine the gesture with the voice command "Park over there". In another embodiment, the individual may use a touch-sensitive interface, such as a screen of a mobile phone or tablet device, to mark an intended stopping point, trace a path towards a particular area or stopping point, or indicate an intended direction of motion via a virtual joy-stick interface as visualized in patent FIG. 6 below. The figure is an example touch-based virtual joystick interface which may be used by a vehicle occupant to indicate desired movements of the vehicle relative to its current position. 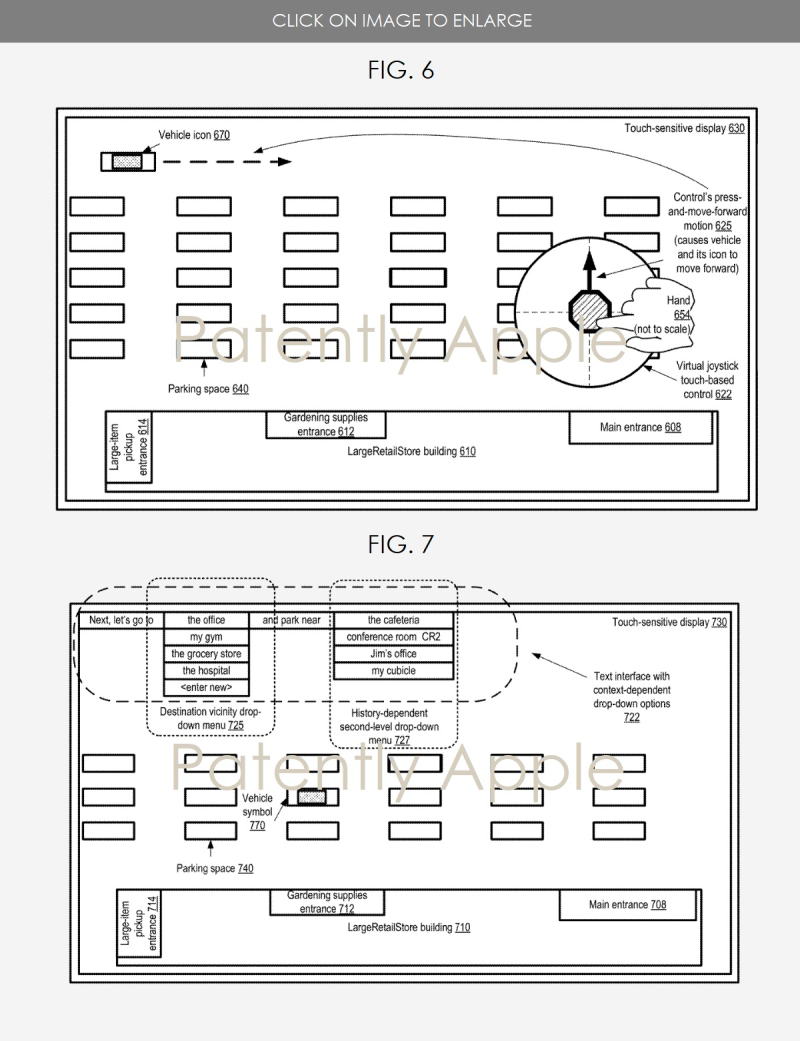 Apple further notes that in some embodiments, the signals may comprise a voice command indicating a landmark or sign which may be visible from the vehicle, such as the equivalent of "Park near the gardening supplies entrance" or "Park near the cafeteria entrance". Based at least in part on the detected signals and at least in part on a data set indicative of the external environment of the vehicle (such as data collected via one or more externally-oriented cameras of the vehicle), one or more vehicular movements which would enable progress to be made along a path towards an intended stopping point may be determined by the navigation manager. The method may further comprise transmitting a first directive to one or more motion control subsystems of the vehicle (such as an acceleration subsystem, a braking subsystem, a steering/turning subsystem and so on) to initiate at least a first vehicular movement of the one or more vehicular movements.

In some embodiments, the signals detected from the individual, may indicate a task or activity that the individual wishes to perform. For example, if the individual states "I'd like to buy some plants for my garden" in the vicinity of a large retail store, the navigation manager may determine that the vehicle should preferably be parked near an entrance marked "gardening" or "gardening supplies".

In one embodiment, corresponding to one or more destinations, respective elements of a multi-option menu may be populated with several tasks or activities which can be mapped by the navigation manager to respective sets of stopping points. Such a multi-option menu may be provided to the individual, for example, via a drop-down menu of a text-based interface which can be used by the individual to provide conversational-level guidance to the navigation manager. This is visualized in patent FIG. 7 above.

Apple's patent FIG. 4 below illustrates an example vehicle environment comprising a plurality of sensors which may collect data that can be analyzed to determine the intended tasks or goals of individuals authorized to provide navigation guidance. 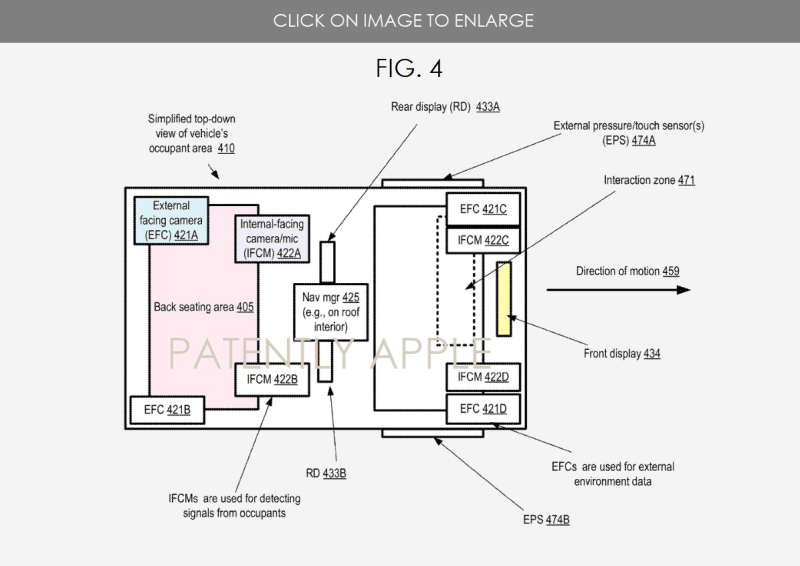 Apple's patent FIG. 8 above illustrates an example scenario in which a gesture made using a handheld computing device or phone may be used to provide navigation guidance. 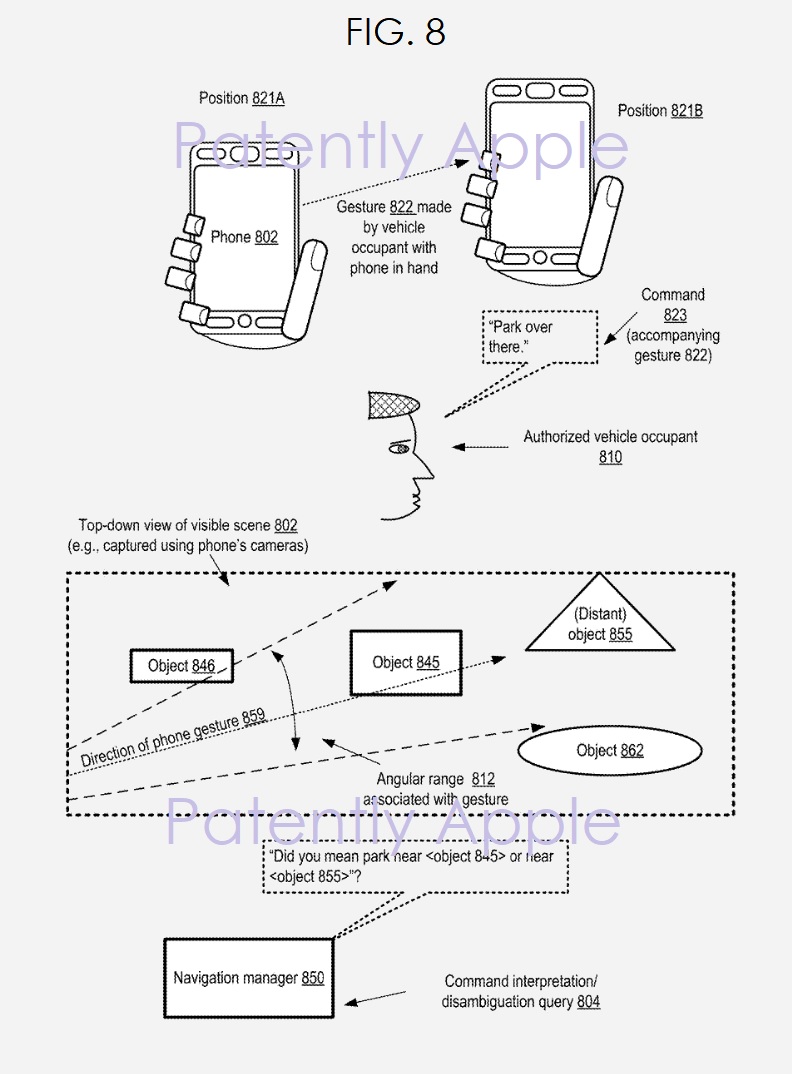 To review Apple's other patents relating to autonomous vehicles, review our archives here.