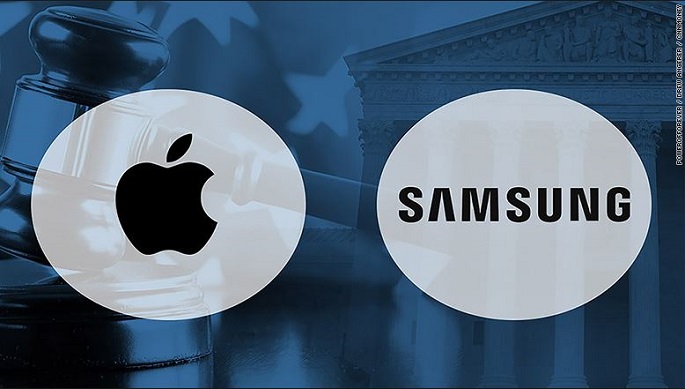 On May 24 Patently Apple posted a report titled "While Samsung wanted to Pay Apple $28 Million for Patent Infringement, the Jury's Verdict was for over Half a Billion," followed by a report titled "Samsung Legal Explodes in Anger over the Verdict Favoring Apple in Light of the Previous Supreme Court Ruling," on May 25. As always, Samsung's attorneys took a fit at the last verdict vowing to appeal the decision and mocked the Jury's verdict. Late yesterday Apple and Samsung settled their seven year patent battle without details of the final settlement.

Reuters reports that "Apple and Samsung are rivals for the title of world's largest smartphone maker, and the dollar sums involved in the decision are unlikely to have an impact on either's bottom line. But the case has had a lasting impact on U.S. patent law.

The string of lawsuits started back in 2011 after Apple co-founder Steve Jobs threatened to go "thermonuclear" on rivals that used the Android operating system.

Going back to a 2011 Patently Apple report titled "Steve Jobs Secret Meeting to Explore an iPod Phone is Revealing" I noted that going to page 512 of the Steve Jobs biography by Walter Isaacson he noted:  "As he sat in the house in Palo Alto the week the lawsuit against was filed [against HTC], he became angrier that I had ever seen him:

'Our lawsuit is saying, "Google, you fucking ripped off the iPhone, wholesale ripped us off," Grand theft. I will spend my last dying breath if I need to, and I will spend every penny of Apple's 40 billion in the bank, to right this wrong. I'm going to destroy Android, because it's a stolen product. I'm willing to go to thermonuclear war on this. They are scared to death, because they know they are guilty. Outside of Search, Google's products – Android, Google Docs – are shit.'

I truly hope that Apple Legal will be given the green light by Tim Cook to sue Android OEM's or Google themselves over the 'Slide to Unlock' feature – because it was considered a 'breakthrough' feature by Apple's executive team and Android shouldn't be able to copy it without consequence."

Although the Apple-Samsung case may now be settled, Google never paid a price for what the late Steve Jobs called their "stolen product."

If you're interested in more of the background in the Apple-Samsung patent battle you could check out Bloomberg's report here.

While this particular patent battle has come to a close, Apple continues its multibillion-dollar legal battle over patent royalties to be paid to Qualcomm. Last week we posted a report titled "Apple to Challenge Qualcomm Patents found in the Infringement Case filed with the U.S. International Trade Commission (ITC)." Apple will be challenging the validity of four of Qualcomm's patents with the U.S. Patent and Trademark Office.