Home Archives Contact Us Subscribe Twitter Facebook MeWe Patently Mobile
Apple Reportedly in Talks for Distribution Rights to an Animated Movie Created by an Oscar-Nominated Animation Studio
Apple Focuses Four new Ads about Creatives who choose to use the MacBook Pro for Music, Photography and Developing 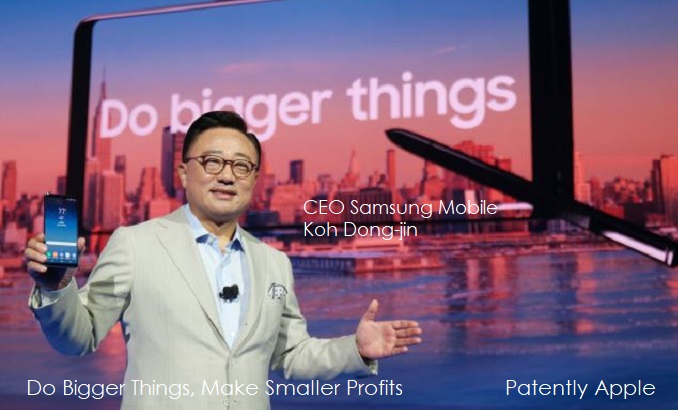 While Samsung's Galaxy S9 was able to inch ahead of Apple's iPhone X for April, overall Samsung smartphone sales suffered in this quarter going against Apple's deeper bench (iPhone X, 8, 8-Plus, 7 and 6 models) that dominated the top 10. The result is that Samsung Electronics' shares have been on the downward path in recent days as its earnings in the second quarter are forecast to be lower than expected due to disappointing smartphone sales.

While their Galaxy S9 had a temporary move upward in April, market analysts have said that the outlook for Samsung to record negative growth during the April-June period is high and will mark the lowest in six quarters.

Analysts point out that about 30 million units of the firm's latest Galaxy S9 smartphone are anticipated to have been shipped, the lowest since the Galaxy S3 released in 2012.

Han Seung-hoon, an analyst from Deutsche Bank, noted in an investment report: "The slowing sale of smartphones has pressured it to cut the retail price of its flagship Galaxy handsets, which may have led to the profit drop of the tech giant."

Nomura Securities projected that Samsung may have earned 15.2 trillion won, down from the previous estimate of 16.1 trillion won.

Eo Gyu-jin, an analyst from EBEST Investment and Securities stated that "The mobile division's operating profit will likely be 450 billion won lower than the previous estimate due to the slowing demand for high-end smartphones."