While the Smartphone Market Declined Year over Year for the second consecutive Quarter, Apple bucked the Trend

On April 25 Patent Apple posted a report titled "China's Smartphone Market Shrank 8% in Q1 2018 While Apple's iPhone Sales beat the Trend Spectacularly." The report stated that Apple grew 32%. When a report by Canalys was published and most Apple news sites, Patently Apple questioned the report and continued to stand behind the Counterpoint report. Analysts and reporters of every stripe continued to play up the doom and gloom story of the iPhone and iPhone X and Apple's stock took a stiff hit based on false rumors and short sellers. Yesterday Apple reported their financials for fiscal Q2 2018 and blew away the doomsayers.

Apple's CEO stated during his summary of the quarter that they were "thrilled to report our best March quarter ever, with strong revenue growth in iPhone, Services and Wearables. Customers chose iPhone X more than any other iPhone each week in the March quarter, just as they did following its launch in the December quarter.

Tim Cook later added that "For the first half of Apple's fiscal year, the iPhone brought in $100 billion in revenue, an increase of $12 billion dollars over last year setting a new half year record and achieving our highest first half growth rate in three years.

The iPhone gained share in the quarter based on IDC's latest estimates for the global smartphone market. And customers chose iPhone X more than any other iPhone each week in the March quarter just as they did following its launch in the December quarter."

The credibility of analysts like UBS that had predicted iPhone sales growth in China would be roughly flat this fiscal year – is shot. Analyst firm Canalys who ignored Apple's performance in China and purposely placed Apple in the no-mans-land category of "others" proved to be completely unreliable as analytical firm. All the whining from Samsung that OLED sales were poor due to low sales from iPhone X was propaganda from a rival and the media ate it up. Yes fake news, and imagine Facebook being unable to figure it out.

Today Counterpoint posted a new report covering Global Smartphone Shipments with Apple being only one in three smartphone companies who bucked the downward trend in smartphone shipments for the quarter. One in four if you count Hong Kong based iTel. 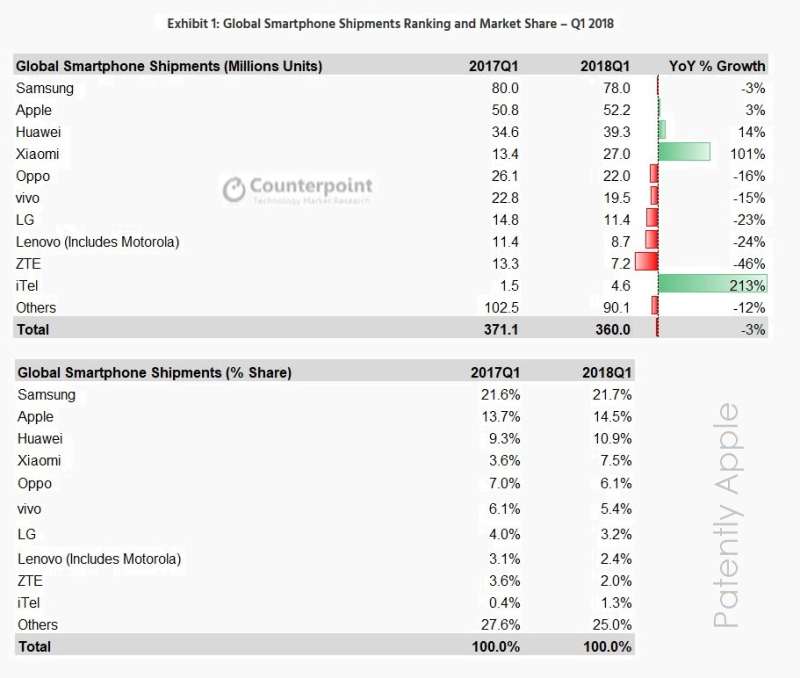 As Counterpoint's chart indicates, Apple, Huawei, Xiaomi and little known iTel were the only ones to escape the smartphone downturn with some rather spectacular falls from the likes of Oppo, Vivo, LG, Lenovo and ZTE.

According to the latest research from Counterpoint's Market Monitor service, global smartphone shipments declined 3% annually in Q1 2018. Top 10 players now capture 76% of the market thereby leaving 600+ brands to compete for the remaining 24% of the market.

Apple grew 32% YoY in China due to strong performance of its iPhone X. While the promotions were not aggressive for the iPhone X, except in operator channels, its demand remains healthy in the market."

We reported on April 24 that Xiaomi overtook Samsung in India for the first time in a stunning rise. In counterpoint's chart we see that Xaiomi grew 101% in China this quarter. For sure Xiaomi is pushing aggressively yet with little profit as Apple walked away with 86% of the industry's profits.

So why is Xiaomi's smartphone sales soring of late? The answer is likely linked to their upcoming IPO. The South China Morning Post recently reported that "Hosting what's shaping up to be the world's biggest initial public offering of 2018 may be a double-edged sword for Hong Kong.

Xiaomi is preparing a share sale that will raise at least US$10 billion, people familiar with the matter said. The city's red-hot IPO market usually sees offerings oversubscribed -- sometimes by hundreds of times -- as investors borrow heavily to place orders."

Wouldn't a company with 100% growth in China and the number smartphone in India this quarter be appealing for Asian investors? Yes of course. Even if it's with little to no profits, Analysts are famous for pushing "volume sales" as being the ultimate metric for why an investor should buy a company's stock. The almost out-of-the-blue rise in Xiaomi's performance therefore is directly linked to their upcoming IPO.

Apple on the other hand is not only the most profitable smartphone maker in history, they delivered a winning quarter with the iPhone X winning every week throughout the quarter worldwide. Now that a true snapshot of a winner.