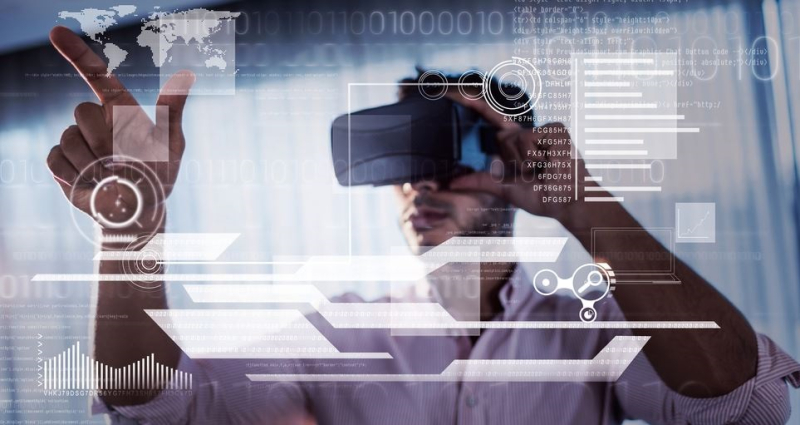 In September 2016 Patently Apple posted a report titled "Apple's Enthusiasm for Integrating Augmented Reality into Future Devices and Apps is Growing Louder." In that report we noted that while most of the tech industry was barreling into the wiz-bang of Virtual Reality (VR), Apple appeared to be betting on Augmented Reality (AR) being more viable and pliable longer term." Our reported added an interview video with Apple's CEO explaining to ABC's Robin Roberts that Apple was more focused on AR than VR.

Google and Samsung focused on VR and Apple outsmarted the crowd by choosing Augmented Reality via ARKit. In the long run, Apple may be focusing on Mixed Reality. Patently Apple posted two patent reports (one and two) earlier this year on Apple's 8K Foveated micro-displays for a Mixed Reality (MR) headset. Then a rumor surfaced last month that Apple was reportedly aiming to launch a high-end mixed reality headset in 2020 or shortly thereafter.

In a new report published overseas, a Samsung official stated that "VR was once tapped as the next hot technology. However, despite sizable investment in it, the technology failed to resonate with consumers," and Samsung lost on that gamble even after giving simpleton headsets away when buying a Galaxy S8 smartphone.

The official added that "Now, Samsung thinks the mixed reality market is a bit more promising than VR or AR in wider usability and adaptability. As we achieved in the 'Phablet' market, Samsung has stronger intent in the consumer market with the firm's new devices supporting mixed reality technology."

The report's focus was Samsung expanding its strategic alliance with Microsoft as the Korean technology heavyweight is working on a new more powerful cordless headset that supports both augmented reality (AR) and virtual reality (VR) given the company's intense focus over the past year on pushing "mixed reality" (MR) in its premium Galaxy line of devices.

In a phone interview a Samsung official told the publication that "Samsung Electronics is working on developing cordless and high-priced headsets supporting both VR and AR. Definitely, Samsung plans to use in-house application processors, OLED displays and sensors. But more importantly, Microsoft has lowered its demand for royalties as it is taking a multi-pronged approach to delivering a rich ecosystem of games and applications that will entice users."

Samsung plans to display its new offerings at an upcoming IFA technology fair to be held in Berlin in late August.

It's believed that Microsoft's content and Xbox gaming could be a huge boost in making MR headsets a hit.

While Samsung was all hyped with simpleton VR headsets to promote their smartphones, Apple didn't bite and instead focused on delivering advanced AR for iPhone X and beyond.

Now that the news is out that Apple is planning a high-end MR headset, Microsoft and Samsung are going all out to ensure they get well ahead of Apple and pushing Xbox gaming could be a way to interest millennials to at least try it out.

Microsoft is still waiting for their first home run against Apple in hardware. Their Surface tablet, Surface book and Surface Studio have collectively bombed against Apple's iPad, iPad Pro, iMac and iMac Pro.

Will Microsoft's MR platform with Samsung hardware finally give them something to crow about? While only time will tell, I highly doubt that any one over at Apple Park is losing any sleep over this news.