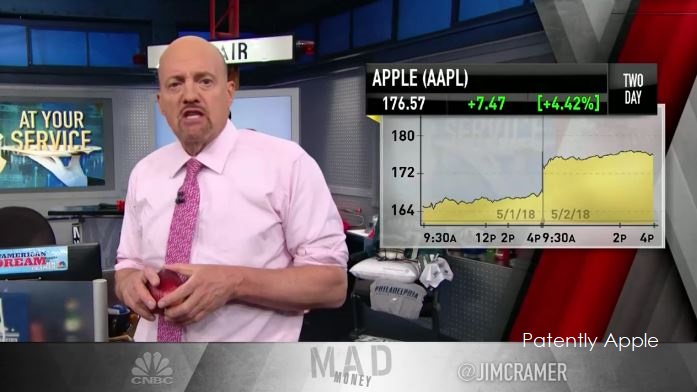 Jim Cramer of "Mad Money" fame is doubling down on his praise for Apple after their earnings were revealed. Cramer says that Apple's growing service stream could be a major advantage for them going forward.

Cramer further noted that Apple's service stream revenue has never been quite as important as it became in the second quarter of 2018. "It simply didn't have enough critical mass to make a difference until, well, now. With last night's blowout quarter, which had huge China sales and fabulously better than expected numbers for even the much derided iPhone X, that narrative is now gone. The key takeaway was that the service business has finally arrived."

While Cramer is hot for Apple due to their big push into services, Reuters decided to report on the same subject with a slighly negative tone.

Reuters reports today that "Apple Inc is betting on services such as app downloads and music subscriptions to help drive growth as the cell phone market matures, but the company faces tough competitors and potentially low profit margins in some of its target areas."

Reuters thinks that Apple's 38% company wide margins will be tough to maintain against services like Spotify, Netflix and others who operate at much lower margins.

Reuters quoted Bob O'Donnell of TechAnalysis Research as saying that "Some of these services are for sure going to have much lower margins than Apple's core hardware business."

Erik Gordon, a professor at the University of Michigan Ross School of Business stated that "Apple plans to spend $1 billion developing original video content, although it doesn't charge for its shows on its Apple TV device."

Okay, that last statement is a little ignorant. Apple has yet to introduce their upcoming media service that will showcase their new media series now in production. The latest on that front was announced yesterday regarding a new crime series given the green light for 10 episodes.

Apple Worldwide Video is the current brand for this new service though it could change when it goes public. Apple will definitely be charging a fee for this service and it definitely won't be free as Erik Gordon is thinking.

Chief Financial Officer Luca Maestri noted during Apple's financial conference that he expects services to boost margins but allowed for uncertainties due to product mix.

Maestri said in an interview with Reuters that "As we're able to grow the services business, that should provide a positive (to margins), a tailwind. At the same time, within the services portfolio that we have, we have services that have different levels of profitability, so we also need to take into account the mix of services we're going to be selling." Read more on this in the Reuters report.

You'd think by now that Reuters and others would stop with this notion that Apple must compete with services or competitors at a particular price and make a limited margin. Apple has bucked this margin trend with iPhone sales in general and with the iPhone X sales in particular which was their number one iPhone model with the highest margins.

Apple fans have no problem in generally paying a modest premium for Apple products and services and that's not going to change anytime soon.