Yesterday Patently Apple posted a report titled "While the Smartphone Market Declined Year over Year for the second consecutive Quarter, Apple bucked the Trend." We noted in the report that Counterpoint Research posted a new report covering Global Smartphone Shipments with Apple being only one in four smartphone companies who bucked the downward trend in smartphone shipments for the quarter. Counterpoint was a head of the pack reporting on Apple's great performance in China as we reported on April 25. Late yesterday IDC posted their report covering worldwide smartphone shipments to confirm Apple's performance.

During Tim Cook's summary of Apple's fiscal Q2 financials he mentioned that "The iPhone gained share in the quarter based on IDC's latest estimates for the global smartphone market." Obviously Cook got an advanced copy of the IDC report as it was only published the day after Cook's commentary.

The latest IDC report states that "Apple's first quarter saw the iPhone maker move 52.2 million iPhones representing a modest 2.8% year-over-year increase from the 50.8 million units shipped last year. Despite rumors of an underperforming iPhone X in the quarter, Apple stated that the iPhone X was the most popular model each week in the March quarter. 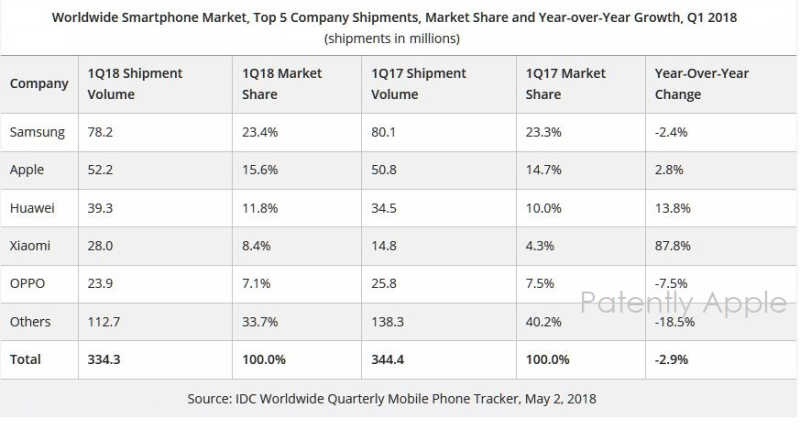 As Patently Apple reported back in April, Apple bucked the declining trend in China and this is the second report in the last two days showing that Apple beat the worldwide decline in smartphone trend against a negative wind from tech media and Wall Street analysts who proved their "sources" aren't worth a damn dime.

As an example, the blog Apple 3.0 posted two negative reports on Apple's performance in China for Q1. One report was titled "Apple analyst: Smartphones into China fell 29% in China."  The report pointed to Apple likely having a mid-single decline in iPhone sales in China. A second report was titled "Analyst sees Apple weakness in China smartphone data.

There were many other reports with similar levels of negativity pointed at Apple's performance in Q1 and yet it's Apple's strength in China with the iPhone X's strength in particular that allowed Apple to end the quarter in positive territory.