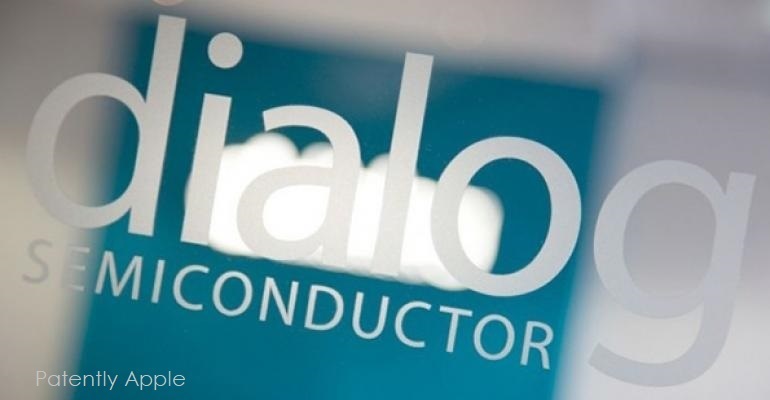 In late November Patently Apple posted a report titled "Rumor of Apple Developing its own Power Management Chip Drops Dialog Semiconductor's Stock price in Frankfurt." Then in early March word was that Apple may continue to work with Dialog until 2019-2020 while their future chips were in development. Word today is that Apple will order 30% fewer chips from Dialog this year, according to a company statement.

The Financial Times report states that "Dialog Semiconductor has warned that revenue growth will be lower than expected this year after Apple, the chipmaker's biggest customer, confirmed plans to build its own power management chips for iPhones.The Anglo-German company said Apple had decided to order 30 per cent fewer of the chips despite reassurances less than six months ago that business this year would not be hit by "potential actions by Apple."

According to a statement released after the markets closed on Thursday, Apple will order fewer chips for new phones, knocking 5 per cent off Dialog's consensus revenue expectations of $1.5bn for the financial year.

"Dialog Semiconductor plc (XETRA:DLG) has been provided with a reduced share of the volume forecast from Apple for the main Power Management IC (PMIC) for the 2018 smartphone platform.

The projected volume for the sub-PMIC in the 2018 smartphone platform and all other PMICs including those for tablets, wearables, notebooks, remains unchanged.

This is the first time one of our custom PMICs for the smartphone platform is being dual sourced and it is estimated to reduce the FY 2018 revenue by approximately 5%. The company still expects revenue growth in FY 2018. As in previous years, revenue performance will be strongly weighted towards the second half of the year.

chief executive Jalal Bagherli stated during a conference call that "I would expect there would be a similar reduction [in demand for the power management chips] next year but beyond that I don't know. We are making a lot of new inroads with new customers."

The news sent its shares dropping close to 4% at one point but has since stabilized, down about 1%. Update June 1st 5 a.m.- shares down over 15% by the morning.