A new report today reveals that Vivendi's Canal+ Group announced it will be offering the Apple TV 4K internet-streaming device as a set-top box option for its subscribers in France. Apple TV 4K will be available starting on Thursday, May 17 for all subscribers, distributed directly by Canal+ Group, at the same price of a regular Canal+ set-top which is €6 per month (US$7.25/mo)

Variety further reported that "With the Apple TV 4K box, customers will be able to access their channel lineups, including including a lineup of 4K and HDR content, as well as access Apple's App Store, Apple Music, Siri voice recognition, and other features."

Frank Cadoret, deputy general manager of Canal+ France, said in a statement: "We are proud to offer Apple TV 4K and our unique selection of programs to our millions subscribers in France. Apple TV is the perfect showcase for our premium content exclusives, in particular cinema, sport and our original creations."

Oliver Schusser, Apple's VP of Apple Music and international content, added, "We believe that Canal customers will love using the Apple TV 4K as a decoder. Customers will be able to benefit from a rich and user-friendly experience to watch their favorite Canal programs, as well as accessing Apple services, including the App Store and Apple Music."

The Canal+ Group has been working with Apple TV since 2016 as noted below and today's announcement takes it to the next level. 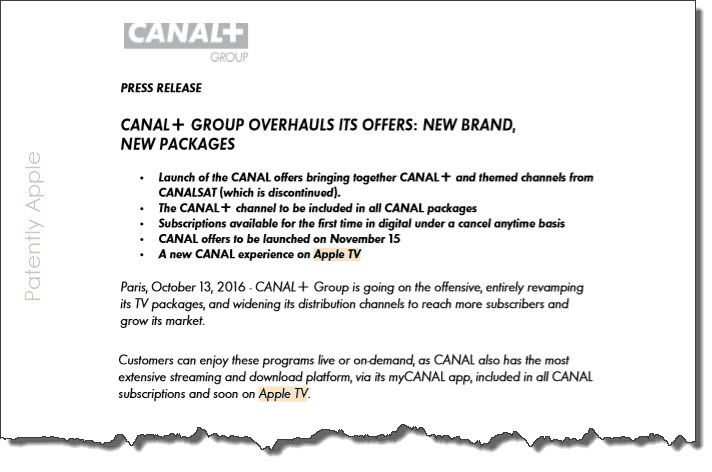 Timed so closely to Apple's World Wide Developer Conference, the question becomes: Is this a one-time project or is this an Apple pilot project for a future service coming to other cable companies?