Today the US Patent & Trademark Office published a patent application from Apple that relates to user interfaces of electronic devices, particularly devices having dual built-in cameras that could simultaneously record and display two different viewfinders for creating videos.

Camera features are usually updated every year from Apple and their competitors as cameras are a make-it of break-it feature for some consumers. Only time will tell if Apple's latest camera invention makes it to prime time someday soon, but it sure sounds interesting to be able to film from two different perspectives at the same time as our cover graph illustrates.

The easiest example of being able to film from two different perspectives simultaneously from an iDevice with a dual lens camera is presented in Apple's patent FIG. 7 presented below. 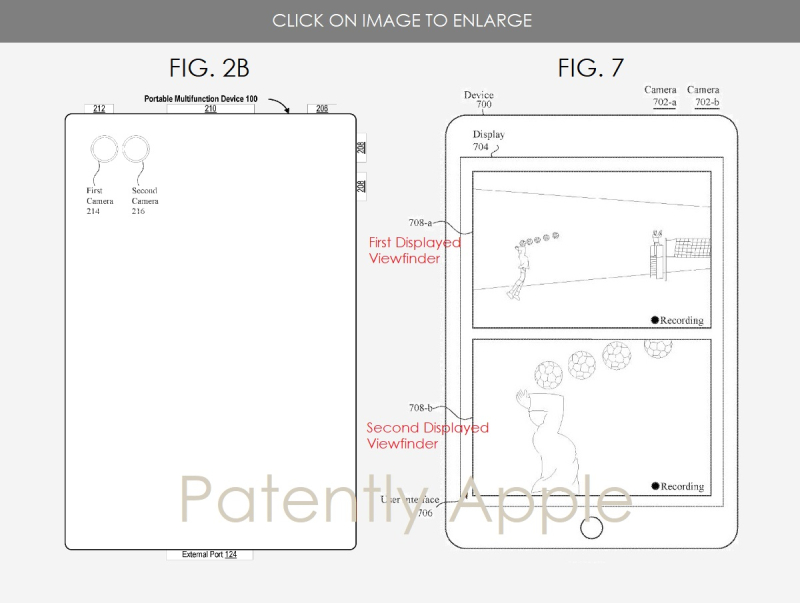 The user interface allows a user to manage the compositions of digital viewfinders 708-A and 708-B independently, such as by zooming and panning viewfinder content separately.

The user interface also allows a user to initiate simultaneous recording (e.g., storing) of visual information from both cameras.

In some embodiments, the user interface permits user control of the frame rate at which "video" is recorded / stored. For example, the user interface can record / store visual information from camera 702-A (as shown in viewfinder 708-a) at 24 frames per second (fps), which is accepted in filmography as sufficient for producing content perceived by human users as video.

Simultaneously, visual information from camera 702-B (as shown in viewfinder 708-B) can be recorded / stored at a higher frame rate, such as 48 fps, to enable slow motion playback of the volleyball player's serve in detail.

In some embodiments, the user interface permits user control of other visual characteristics that are applied to a recorded / stored video. In some examples, content from the first and second cameras are recorded and stored at different resolutions.

In some examples, content from the first and second cameras are stored using different image enhancement techniques, including image processing techniques that alter the appearance of an image or video, such as its brightness, contrast, saturation, hue, color intensity, exposure, color scheme, and/or the application of filters.

In some embodiments, content stored from one camera and used as an identifier for content stored from another camera. For example, a still image obtained from wider-angle camera 702-A is used as a thumbnail image to represent a video file created based on content from higher-magnification camera 702-B. The iDevice can display the thumbnail image (or other graphical representation) of the stored video among a library of videos for later playback selection.