Home Archives Contact Us Subscribe Twitter MeWe Patently Mobile
Qualcomm cuts 1,500 US Jobs as they Prepare to Absorb 45,000 employees from their Acquisition of NXP
The Media unjustifiably points the finger at Apple for bringing down TSMC's second half forecasted profits for 2018 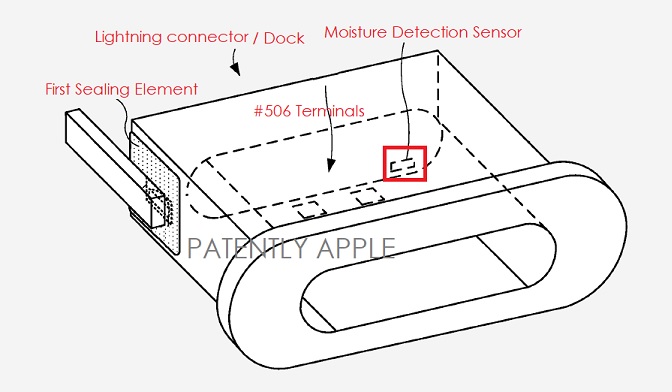 Back on March 18 Patently Apple posted a patent application report titled "Apple files Patent Describing a new Water Resistant Coating Process and other Waterproofing Modifications." The patent pending invention was discovered in Europe which described new ways of waterproofing iDevices. Currently the Samsung Galaxy S9 carries a waterproof rating of IP68 while Apple's iPhone X is a little behind with an IP67 rating. Obviously Apple is working to advance iDevice ratings to the IP68 level. Our March report was extensive and you could check it out for more graphics and details, here.

Today the US Patent & Trademark Office published two patent applications from Apple covering the identical European patent's main theme of a new water resistant coating process for future iDevices. The European patent was a grand overview of Apple's planned process for waterproofing while the two U.S. patents focus their attention on waterproofing the SIM Tray and Audio Module. All of the patent figures are identical to those presented in their Europe filing. Apple's patent FIG. 6 above illustrates the enclosure shown in FIG. 5 subsequent to the coating operation and removal of the mask. Subsequent to the removal of the mask, FIG. 6 shows a first coating and a second coating covering the first layer and the second layer respectively. The first coating and the second coating remain to provide an ingress barrier to liquids that may pass through the aforementioned channels that receive the first part and the second part.

Will Apple's the next-gen iPhones such as the iPhone X Plus (or whatever they brand it) be the first iPhone to support IP68 water resistance? It looks like it could, but only time will tell if the coating process they've invented is ready for prime time.