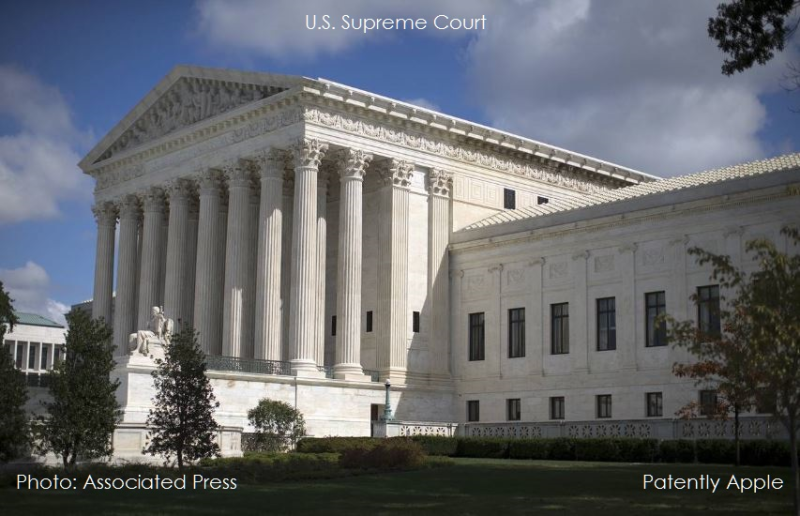 In June 2016 Patently Apple posted a report titled "Supreme Court Upholds Patent Rules that Assist Tech Companies like Apple Fight Patent Trolls," followed by a report in December 2016 titled "The Patent Case of the Decade Could End Most Patent Troll Litigation in Eastern Texas Courts against Apple & others." It was reported yesterday that the U.S. Supreme Court upheld the legality of the patent review process. At the end of our report you could review the court's full decision.

A CNBC report noted late yesterday that the "U.S. Supreme Court on Tuesday gave its stamp of approval to a government review process prized by high technology companies as an easy and cheap way to combat "patent trolls" and others that bring patent infringement lawsuits.

The justices ruled 7-2 that a type of in-house patent review at the U.S. Patent and Trademark Office does not violate a defendant's right under the U.S. Constitution to have a case adjudicated by a federal court and jury. The court ruled against Oil States International, a Houston-based oilfield services company that had challenged the legality of the process, called inter partes review (IPR).

While the ruling gave Silicon Valley reason to celebrate, it was sure to displease name-brand drugmakers, which had called the IPR process a threat to innovation. Firms dubbed "patent trolls" have a business model based on suing other companies over patents rather than actually making products.

These reviews have been especially popular with companies like Apple and Samsung Electronics that are frequent targets of patent infringement suits. On the other hand, pharmaceutical companies like AbbVie, Allergan and Celgene called for the IPR system to be scrapped."

The report further noted that "Though it upheld the IPR process, the Supreme Court issued a ruling in a separate case on Tuesday that faulted one aspect of how the reviews are carried out. The justices said that when several parts of a patent are challenged, the patent office does not have the discretion to review only some of them." For more on this, read the full CNBC report here.

Surprising is that Justice Gorsuch was one of the dissenting voices. Gorsuch beghins is dissent this way: "After much hard work and no little investment you devise something you think truly novel. Then you endure the further cost and effort of applying for a patent, devot-ing maybe $30,000 and two years to that process alone. At the end of it all, the Patent Office agrees your invention is novel and issues a patent. The patent affords you exclu-sive rights to the fruits of your labor for two decades. But what happens if someone later emerges from the wood-work, arguing that it was all a mistake and your patent should be canceled? Can a political appointee and his administrative agents, instead of an independent judge, resolve the dispute? The Court says yes. Respectfully, I disagree."

Below is a full copy of the Supreme Court decision, courtesy of Patently Apple.