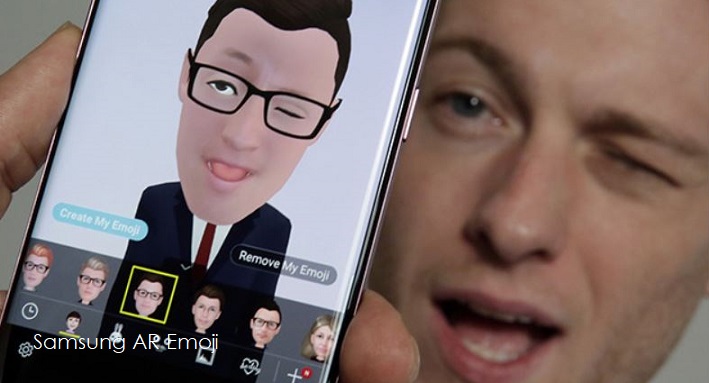 When Samsung introduced the AR Emoji feature on their new Galaxy S9, fair minded techies knew this was Samsung's attempt in copying Apple's iPhone X feature called Animoji. Samsung's feature is  currently based on 2D imagery while Apple's iPhone X is based on their advanced TrueDepth camera system that is able to capture 3D facial recognition for Animoji and Face ID.

But a Samsung invention that began in 2013 and granted last week by the U.S. Patent and Trademark Office, shows us that Samsung had been working on a future application that was designed to challenge Skype, Google's Hangout and Apple's FaceTime. The system is based on a future Galaxy smartphone with a 3D face camera. Communication will be made between advanced 3D avatars. So what Samsung introduced with AR Emoji is really just the appetizer before their video communications app is ready.

While Samsung believes users will find an advanced 3D avatar system superior to FaceTime, for instance, it won't be for everyone to be sure. The two FaceTime videos below can't be replaced with live avatars no matter how they'll try.

While teens may find it more fun to communicate as 3D avatars, I highly doubt that business users will want to be talking to cartoon characters. But who knows. The system may start with avatars and eventually gravitate or provide options to use 3D face advancements for the 5G network era.

For now, a short overview of Samsung's granted patent is presented to you below.

In a patent granted to Samsung last week by the U.S. Patent Office they note that existing video communication system and services, such as Skype and Google Hangout, transmit 2D video streams between devices running player applications.

Such video communication systems typically transmit video streams of compressed sequential images paired with audio streams between the devices. Most video communication systems for use by an individual user require a player application running on a computer device that includes a camera and a display. Examples of the computer device may include a desktop or laptop computer having a camera mounted at the top of the screen, or a mobile phone with the front facing camera built in to a bezel at the top.

Another problem with most video communication setups, whether on a desktop, laptop, or mobile phone, is that the user appears to be looking down to the person to which they are communicating via video because the user's gaze direction is at the display of the device, which is typically below where the camera is mounted.

This camera/display geometry disparity prevents users from having a conversation while looking each other in the eye. The related problem is that transmission of a video comprising 2D image sequences of a person also loses 3D depth information about their face.

There are also systems that may transmit a graphical representation of the user's alter ego or character, commonly referred to as an avatar, but avatars typically fail to convey the user's actual likeness, facial expressions, and body motion during the communication.

Accordingly, a need exists for a visual communication system capable of displaying the user's actual likeness, facial expressions, and motion in real time, while reducing bandwidth.

In addition, on the first device there is lower latency in interpreting changes to the 3D mesh model and sending updates than capturing new images and compressing the images into an image sequence. 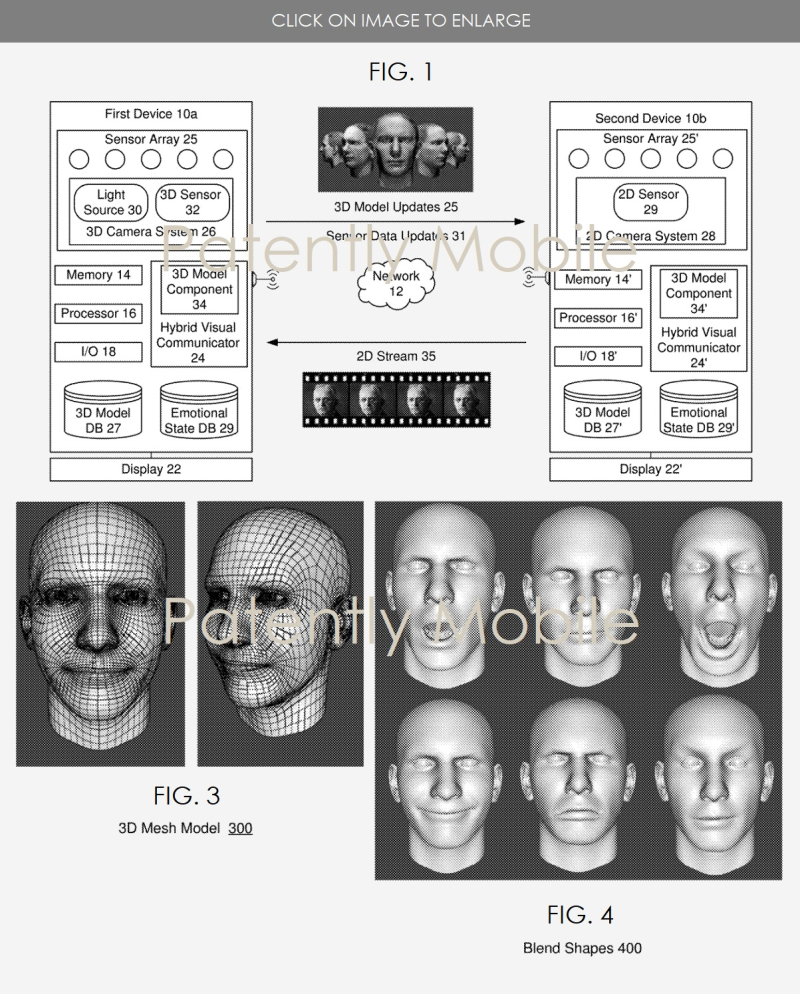 Samsung's patent states that the new visual communications application will be able to work with various operating systems such as Android, BlackBerry, Windows and iOS.

On another level, besides receiving image data from the sensor array of the hybrid visual communicator, it may also receive other sensor data relevant to a context of the visual communication session, including activity data of the first device user, and ambient conditions.

Further to Samsung's patent Figures 3 and 4. Samsung notes that FIG. 3 is a diagram illustrating example representations of a 3D mesh model created of the user's face and head by the 3D model component. In one embodiment, the 3D mesh model of the first device user may be stored in the 3D model database in a neutral position.