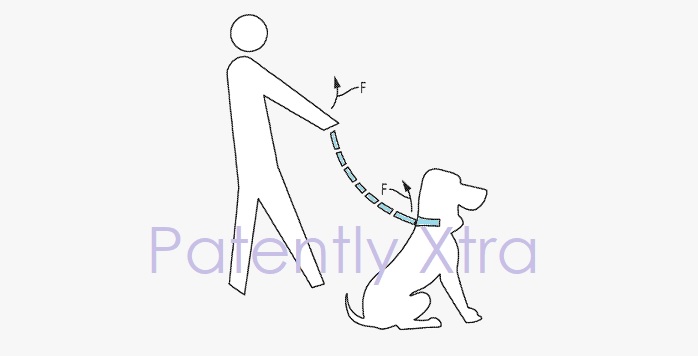 Later this year something called the eShepherd system will be coming to market that will provide farmers and ranchers a way to set up a virtual fence. Horses or Cattle will go right up to a virtual fence perimeter and the collar that the animal wears will use an electrical stimulus (okay zap them) to discourage the animal from going beyond a certain point in the field as shown in the video below. It's geofencing with a physical interactive component.

This week Samsung was granted a U.S. patent for a "Virtual Leash" system that includes a smart collar. Pet owners will be able to control how far their dog could run while on a walk by using their Galaxy smartphone in wireless communication with the smart dog collar. With so many dog lovers in the world, could this be a killer application for a future Galaxy smartphone? Only time will tell. For now, let's take a peek at their newly granted patent.

In patent FIG. 3 below we see the "Gesture Control" in a virtual leash system. 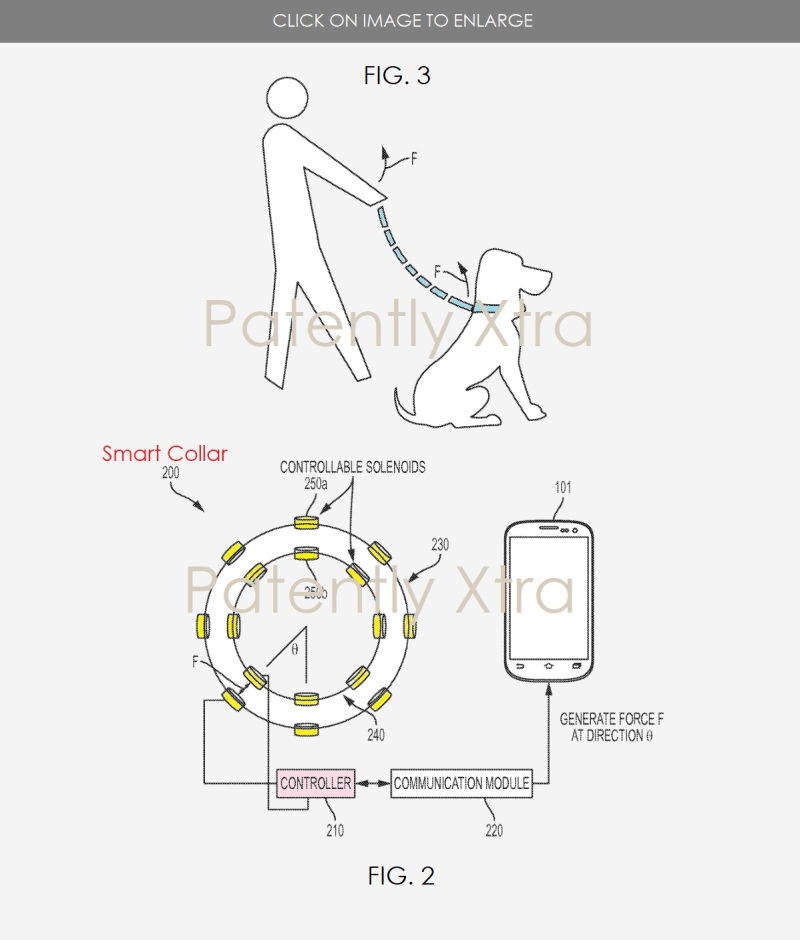 Samsung officially states that an aspect of their invention is to provide an apparatus and method for generating directional force on remote object (dog collar) through a mobile or wearable device or mobile terminal, such as a virtual leash.

In accordance with another aspect of invention, a smart collar is provided. The smart collar includes an inner layer, an outer layer, a plurality of force generation devices arranged on the inner layer and the outer layer, a communication unit configured to receive a command from a mobile device, and a controller configured to control the plurality of force generation devices to generate a force based on the received command.

It's noted in Samsung's patent that the collar also includes a force generation unit which generates the force in response to the user's gestures with the smartphone. According to an exemplary embodiment, the force generation unit may include a plurality of solenoids #250a and #250b noted in FIG. 2 above. The solenoids 250a may be arranged in pairs, with one solenoid of each pair on the outer layer #230, and the other solenoids on the inner layer #240.

The controller generates a current to the solenoids to change the polarity of the solenoid pairs. The resulting attraction or repulsion due to the magnetic field generates a force F, which is felt by the dog wearing the collar.

The virtual leash management module detects the user's gestures via a sensor included in the mobile device, and transmits corresponding commands to the controller of the smart collar. To determine whether a movement of the smartphone is a gesture command, the virtual management leash module may refer to training set data or other data collected during the training mode, as well as pre-set training data.

The strength or speed of the gesture may be used to determine the strength of the force applied to the collar. For example, if the user makes a slow gesture, the virtual leash management module may send a signal to the collar to apply a lower force.

The gestures may include a motion to the left or right, or a pulling back motion. For the left to right motion, the virtual leash Management module generates a command for the collar to generate a force in the corresponding direction, as if the user were holding an actual leash (shown in the dotted lines).

Through the use of gesture control, the smartphone and the smart collar interface to provide a virtual leash through which a user may control a pet. Because the system does not include a physical leash, many of the problems of traditional leashes are avoided. For example, the virtual leash cannot get tangled in obstacles. In addition, the pet is allowed a larger range to move around, and is not limited by the physical leash.

I personally think that the virtual leash needs to work with an accessory and a smartphone. I smart glove would be better because it's natural and mindless. We're all used to gestures like pull back or halt.

In the case of an emergency like stopping your dog from attacking another animal or god forbid a child, the owner wouldn't be able to react instantly as they fumble to use their phone to make a gesture into the screen in time to stop the dog. By that time your dog could have mauled or hurt something or someone. A smart glove is ready to gesture on demand.

As with every interesting positive invention, you know that some will use it as a sex toy and others for fiendish control. It's an idea that prisons may consider in the future to keep prisoners in-line or to stop them from running away if doing road work. It's already being considered as noted in the video below for a VR accessory. It may be a fantasy product for now, but it's likely something that will eventually creep into the market.