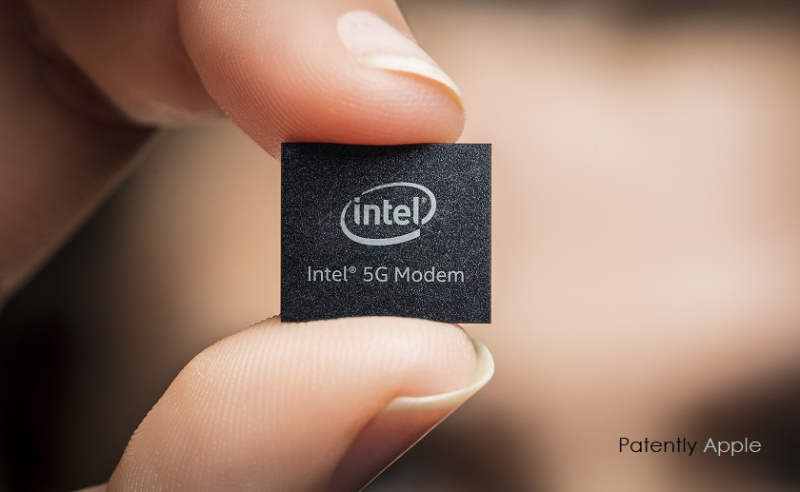 Two rumors broke out in Q4 2017 regarding possible modem suppliers for future iPhones. In November Patently Apple posted a report titled "The new 5G Modems from Intel that Apple may adopt over time to Replace Qualcomm Modems have just been announced." In December we posted a report titled "Rumor claims that MediaTek may work with Apple on Future Products and be a Second Modem Supplier." We noted in the latter report that as the legal battle rages on with Qualcomm, Apple is reportedly actively seeking new chip suppliers to absorb more of the remaining orders, and MediaTek, with its technology, capacity and pricing advantages, is a candidate to becoming a supplier modem chips for Apple in 2018. Today the news appears to be favoring Intel.

According to a report by Fast Company this evening, Apple is expecting Intel to supply 70% of the modem chips inside the new iPhone models which will debut this fall, and–if all goes well–plans to rely on the company for 100% of the modems in next year's iPhones, a source with knowledge of Apple's plans says.

Intel had hoped to provide an even higher percentage of the modems in this fall's new iPhones, and some reports speculated it would get all of the business. But 2018 is the first year Intel will be fabricating its own modem chips using its 14 nanometer process.

Given that technological transition, Apple is apparently waiting to see how well Intel fulfills this year's order. If Intel underdelivers, Qualcomm will make up the balance on top of the 30% it's already planning to provide. There's also a chance that if Intel can produce enough chips on time and on budget it could get more than the planned 70%, our source says.

As of now, our source says, the modem-chip yield rates are not what Intel expected. Only just more than half of the chips being produced are keepers. The Intel engineers are confident they can work the bugs out and push up the yield rates before production ramps into high gear in June and July.

Qualcomm apparently has removed any projection of future Apple revenues from its Q1 earnings report. This is not intended to mean Qualcomm will do no business with Apple in the coming quarters. It is a suggestion that analysts not include revenue from Apple in their models. For more on this story and more background on Intel's problems getting up to speed, read the full report here.

While the Fast Company report didn't mention MediaTek, there could be a door opening for another supplier as a backup, especially in light of Qualcomm's recent admission. They may know more about what's happening behind the scenes than is publicly known today. So stay tuned as Intel cementing 70% may not be in stone just yet.