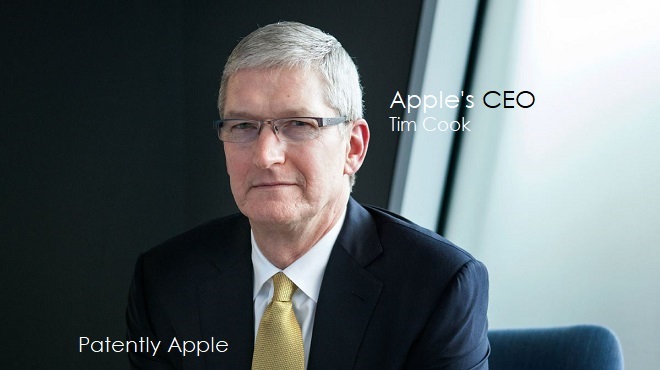 Early this morning Patently Apple posted a report titled "Apple's CEO Attended the State Dinner at the White House last night and will meet privately with the President this Afternoon." Now that the meeting is over, we're learning that President Donald Trump and two top aides talked about trade issues with Cook as the White House prepares to try to avert a trade war with China, a manufacturing hub for the iPhone maker.

Reuters notes that "Cook, who has urged calm during the recent flare in U.S. trade tensions with China, held private talks with Trump in the Oval Office. He also spoke with the president's top economic adviser Larry Kudlow and U.S. Trade Representative Robert Lighthizer.

Trump is preparing to send a delegation to China to try to head off a trade war that stands to harm Apple, the world's largest technology company, and other hardware makers that build products in China.

The meeting, which the White House said had been in the works for a couple of weeks, came the day after Cook sat at Trump's head table at his first state dinner, held in honor of French President Emmanuel Macron.

A White House official described the meeting as "good" but neither the White House nor Apple provided details of the discussions. For more on this report click here.

I'm sure that President Trump wanted to know more about iCloud having to be opened to the Chinese government and other issues related to tech companies, not only Apple. Trump will be bringing concerns that his government, Silicon Valley and business in general have to the negotiating table in China. For that reason, we're likely not to know the details of today's meeting at any time.