Apple's CEO Brushes Off the Notion of Platform Convergence 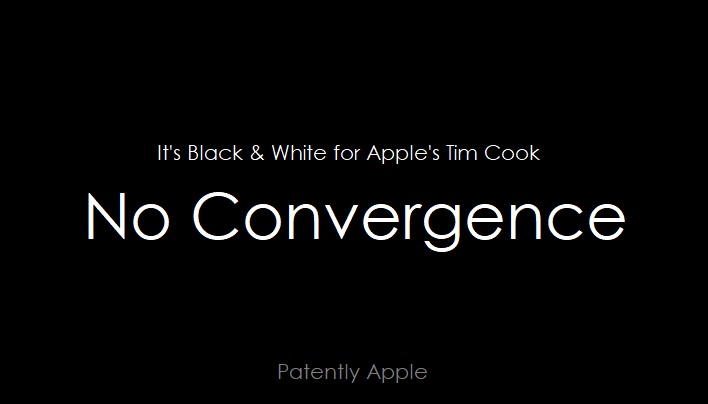 There's been some interest floating around in the blogosphere for years that Apple would some day converge macOS with iOS. The latest report published earlier this month hinted at this was one by Bloomberg's Gurman. The report notes "Apple working on a software platform to merge iPad and Mac apps. The initiative, code named Kalamata, is still in the early developmental stages, but comes as part of a larger strategy to make all of Apple's devices -- including Macs, iPhones, and iPads -- work more similarly and seamlessly together.

Later in that report Gurman noted that "As part of the larger initiative to make Macs work more like iPhones, Apple is working on a new software platform, internally dubbed Marzipan, for release as early as this year that would allow users to run iPhone and iPad apps on Macs."

The hint that there's some kind of convergence in the wind got shot down by Apple's CEO Tim Cook in an interview with The Sydney Morning Herald.

Despite rumours that a merger is in the works, Apple chief executive Tim Cook believes mobile devices and desktop computers should remain in separate worlds with their own bespoke operating systems.

The interviewer Peter Well asked Cook about the divide between the Mac and iOS, which seems almost conservative when compared to Microsoft's convertible Windows 10 strategy.

Cook's response: ""We don't believe in sort of watering down one for the other. Both [The Mac and iPad] are incredible. One of the reasons that both of them are incredible is because we pushed them to do what they do well. And if you begin to merge the two ... you begin to make trade offs and compromises.

So maybe the company would be more efficient at the end of the day. But that's not what it's about. You know it's about giving people things that they can then use to help them change the world or express their passion or express their creativity. So this merger thing that some folks are fixated on, I don't think that's what users want."

Well, not surprisingly, this user would like to see convergence happen – but it's clear that when Tim Cook says convergence isn't going to happen, it's the law. Don't argue, don't debate, it's never happening.

At the moment, if you want convergence, Microsoft Windows is the only game in town. And to date Microsoft has yet to hit a home run on any of its Surface hardware. If Apple feels no pain, there's no incentive to even contemplate it.

Microsoft will take their convergence to the next level in the coming months when they'll introduce next generation 2-in-1 devices using Qualcomm's Snapdragon processor.

Right out of the gate the new 'Always On' devices will be sold under Microsoft's Surface brand along with devices from partners Lenovo, HP, Dell, Asus and likely Huawei. That will be a huge boost for Qualcomm Snapdragon processors and another poke in Apple's eye if the new platform succeeds.

The Verge who got an advanced unit to review. In one segment they noted: "Just as I recently found with Microsoft’s Surface Pro LTE, having an always-available LTE connection in my computer is fantastic. I don’t need to rely on sketchy public Wi-Fi, nor do I need to hassle with tethering my smartphone to get online. I tested the NovaGo with T-Mobile service, and it performed similarly to T-Mobile smartphones in my area. In addition, when the lid is closed and the laptop is in standby, it still maintains its connection to receive emails and other updates, just like a smartphone. I want this in every computer I use, even if I have to pony up for an unlimited data plan to use it." The Verge makes it clear that the new platform isn't for everyone and far from perfect. You could check out their full review here.

To date, Apple's iPad Pro remains the number one detachable device on the market, according to IDC.