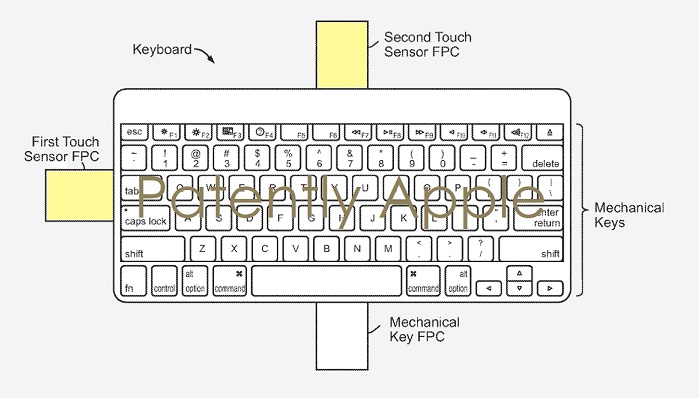 In February Patently Apple posted a report titled "Apple Granted a Patent for a Dual Display MacBook or Second Generation iPad Pro." Last month we posted another report on this subject matter titled "Apple Invents Keyless Keyboards for Macs and iPad Pro with Morphing Interface Options for Gaming, Music & more." Apple has been working on a touch-based keyboard for some time, in fact back to 2006. Apple's latest MacBook Pro introduced the new touch sensitive "Touch Bar" replacing the traditional F-Key bar. This could be a test before extending multi-touch functionality to a full keyboard as Apple's past granted patents suggest. Today's invention relates to a possible next-gen hybrid keyboard for a future iMac or MacBook that relates to a full touch sensitive mechanical keyboard that can accept touch events performed on the surface of the keys.

Apple notes that Keyboards are widely used and are generally accepted as the preferred way to provide textual input to a computing system. These keyboards have mechanical keys that are arranged in the so-called QWERTY layout and are configured to move independently of one another and to comply with standards for key spacing and actuation force. Textual input is received when the keys are depressed. Keyboard layout specifications have been provided in both extended and compact forms by the International Organization for Standardization (ISO), the American National Standards Institute (ANSI), and Japanese Industrial Standards (JIS).

There have been numerous attempts made to introduce an alternative to the standard keyboard. The changes include, but are not limited to, non-QWERTY layouts, concave and convex surfaces, capacitive keys, split designs, membrane keys, etc. However, while such alternative keyboards may provide improved usability or ergonomics, they have failed to replace or duplicate the commercial success of the conventional mechanical keyboard.

Apple's invention regarding a new kind of keyboard covers touch sensitive mechanical keyboards and methods of configuring the depressibility of one or more keys of a keyboard.

A touch sensitive mechanical keyboard can accept touch events performed on the surface of the keys.

Additionally, the keyboard can accept key depressions as textual input. The keyboard can be placed in a gesture operation mode, which can lock the keys to prevent a user from inadvertently depressing a key while attempting to perform a touch event on the surface of the keys.

The keyboard can also be placed in a key press mode, which can allow depression of the keys by a user. 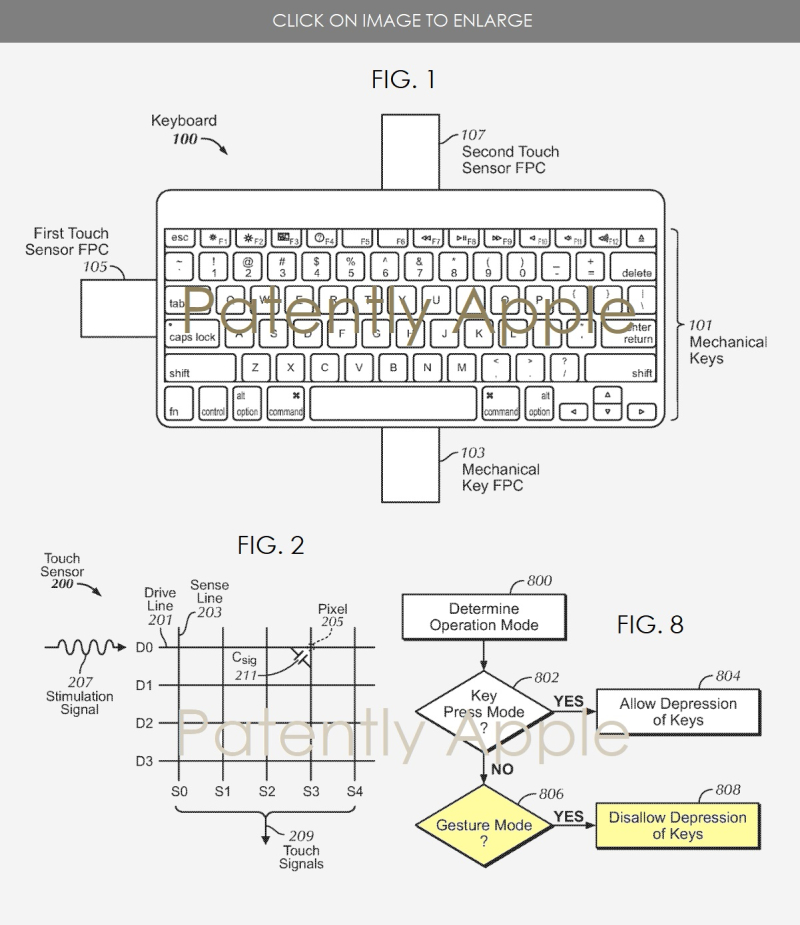 In some embodiments, the keyboard can be configured to have the look and feel of a conventional keyboard. For instance, each mechanical key can be individually depressible, giving the user of the keyboard tactile feedback associated with each depression of a key. The mechanical keys can be used for text entry in a manner similar to a conventional keyboard. Additionally, the touch sensitive area of the keyboard can be used to detect touch events, such as taps or swipes, on the surface of mechanical keys 101. In this way, the keyboard can also be used for cursor input functions, such as point, click, scroll, drag, select, zoom, and the like, without requiring the user to remove their hands from keyboard 100. These functions, and more, can be driven by hand/finger motion while the fingers are sliding over and touching the mechanical keys.

By integrating multi-touch input capability into the keyboard without altering its overall appearance or, more importantly, the familiar way in which it is used for typing, many of the benefits of multi-touch gesture-based input capability can be realized without having any negative impact on the user's text entry experience.

Apple's patent FIG. 2 presented above illustrates a portion of an exemplary touch sensor that can be used to detect touch events on touch sensitive mechanical keyboard according to embodiments of the disclosure.

Apple's patent FIG. 8 presented above is a high-level flow diagram illustrating an exemplary method of configuring the depressibility of keys on a keyboard.

Senior Engineering Manager Steve Martisauskas is noted as the inventor. He left Apple in 2016. This is an oddball patent. While Apple was granted this patent in October 2017, today's continuation patent lists nothing new in their patent claims. You can't have a continuation patent without a single patent claim changing. This may suggest that this patent was originally filed under the engineers name and only recently assigned to Apple.

Beyond the patents that we listed in our opening paragraph, other Apple patents covering virtual keyboards include the following: one, two and three, with a key patent on this dating back to 2009. Apple was granted their first patent relating to a virtual keyboard in 2009 which was originally filed in 2006. 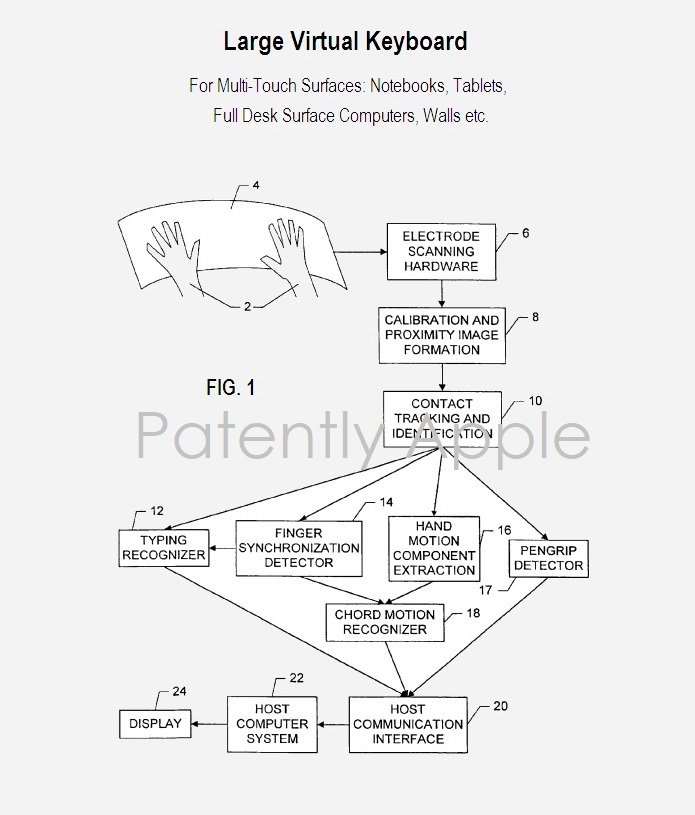 With patents about a dual display MacBook being public, a German artist designed one of the coolest images of what a future hybrid device could look like, with the keyboard palm rest and trackpad turning into a hybrid area that could support Apple Pencil input.