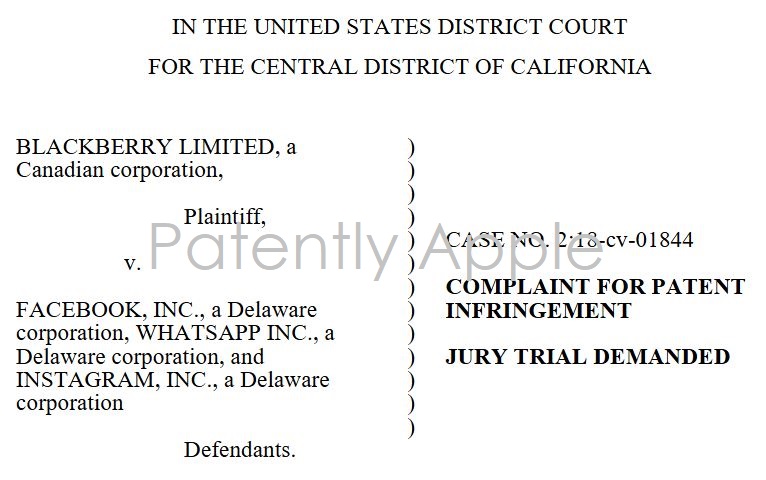 Canada's BlackBerry Ltd. has filed a patent infringement lawsuit against Facebook, WhatsApp and Instagram, claiming they took intellectual property from its BlackBerry Messenger technology. The suit was filed Tuesday in U.S. Federal Court in Los Angeles by Quin Emanuel Urquhart & Sullivan, the very law firm that represented Samsung against Apple in their major patent dispute over the iPhone. BlackBerry's lawsuit is based on seven counts of patent infringement. The particular patents are presented below along with links to each of the USPTO patents.

1. "BlackBerry Pioneers Mobile Messaging - BlackBerry has been a leading innovator in the field of mobile communications for the past 30 years, having invested substantial sums into research and development of communications technologies. BlackBerry's innovations led to the commercialization of some of the earliest models of smartphones in the United States, enabling its users to, among other things, send and receive e-mails securely and surf the internet anytime and anywhere. These same innovations prompted the rise of the smartphone as a necessary everyday accessory for businesspersons and ordinary consumers alike.

3. As an innovator, BlackBerry took many steps to safeguard this valuable intellectual property. It received numerous patents protecting the cutting-edge features of its mobile phones, BlackBerry Messenger, and other communications applications that make such products secure, easy-to-use, and ultimately engaging to the end-user, thereby driving user growth and retention.

4. Facebook and its Companies Later Develop Competing Applications that Improperly Use BlackBerry's Mobile Messaging Intellectual Property - Defendants, on the other hand, are relative latecomers to the mobile messaging world. Defendants created mobile messaging applications that co-opt BlackBerry's innovations, using a number of the innovative security, user interface, and functionality enhancing features that made BlackBerry's products such a critical and commercial success in the first place. These include the features covered by the Patents-in-Suit.

5. The Patents-in-Suit cover, for example:

(a) Security Improvements—improved cryptographic techniques that establish and maintain security over user messages and provide the requisite trust necessary for user adoption of a messaging platform for their communication needs;

(b) User Interface Improvements For Mobile Devices—including (i) improvements in message notification techniques that streamline and optimize reception of new message notifications that prevent users from being inundated with numerous messaging notifications, (ii) display of timestamps in a messaging user interface that provides users with appropriate temporal context for their communications without overtaking the user's screen with unnecessary information, and (iii) tagging friends and family in social media photographs;

(d) Battery Efficient Status Updates for Mobile Devices—improved techniques for transmitting status updates based on whether a second device is viewing the status updates, to reduce power consumption and improve battery life in mobile devices. These features, all invented by BlackBerry, are "table stakes" for modern mobile messaging and social networking.

6. Thus, Defendants have used BlackBerry's own intellectual property to compete with it in the mobile messaging space. These applications are ever expanding, including Facebook Messenger, Facebook Messenger Lite, Facebook Pages Manager, Facebook.com and Facebook Workplace Chat, the WhatsApp Messenger application made by WhatsApp Inc., and the Instagram application made by Instagram, Inc. The importance of mobile messaging is emphasized by the reported $19 billion dollars Facebook spent to acquire WhatsApp.

Facebook deputy general counsel Paul Grewal said in an email to Canada's CBC News that "BlackBerry's suit sadly reflects the current state of its messaging business. Having abandoned its efforts to innovate, BlackBerry is now looking to tax the innovation of others. We intend to fight."

The lawsuit was filed yesterday in the California Central District Court. George H. Wu is the Presiding Judge, with Karen L. Stevenson as the Referring Judge.