As Cook Talks Security in Beijing, the FBI is closer to calling on Congress to enact legislation mandating access to Smartphones 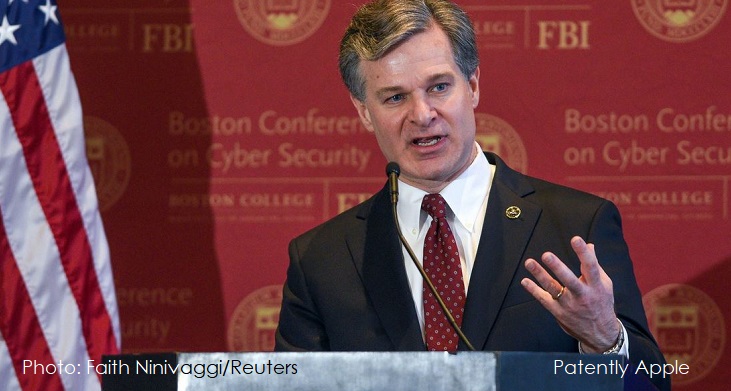 In January Patently Apple posted a report titled "FBI Director Christopher Wray takes up the Fight against Smartphone Encryption calling it an 'Urgent Public Safety Issue.'" Last year former FBI Director James Comey stated: "I could imagine a world that ends up with legislation saying that if you're going to make devices in the US you figure out how to comply with court orders." Director Wray told an audience of FBI agents, international law enforcement representatives and private sector cyber professionals that "We face an enormous and increasing number of cases that rely heavily, if not exclusively, on electronic evidence. A solution requires significant innovation, but I just do not buy the claim that it is impossible."

Last night the New York Times posted a report claiming that Federal law enforcement officials are renewing a push for a legal mandate that tech companies build tools into smartphones and other devices that would allow access to encrypted data in criminal investigations.

F.B.I. and Justice Department officials have been quietly meeting with security researchers who have been working on approaches to provide such "extraordinary access" to encrypted devices, according to people familiar with the talks.

Based on that research, Justice Department officials are convinced that mechanisms allowing access to the data can be engineered without intolerably weakening the devices' security against hacking.

Against that backdrop, law enforcement officials have revived talks inside the executive branch over whether to ask Congress to enact legislation mandating the access mechanisms. The Trump White House circulated a memo last month among security and economic agencies outlining ways to think about solving the problem, officials said.

The F.B.I. has been agitating for versions of such a mandate since 2010, complaining that the spreading use of encryption is eroding investigators' ability to carry out wiretap orders and search warrants — a problem it calls "going dark."

A National Academy of Sciences committee completed an 18-month study of the encryption debate, publishing a report last month. While it largely described challenges to solving the problem, one section cited presentations by several technologists who are developing potential approaches.

According to several people familiar with the new round of deliberations, those three men have been participating in a series of workshops convened at the Massachusetts Institute of Technology by Daniel Weitzner, a computer science professor. They have discussed their research with government officials, including Valerie Cofield, a senior F.B.I. science and technology official working on "going dark" issues.

The researchers, Mr. Ozzie said, recognized that "this issue is not going away," and were trying to foster "constructive dialogue" rather than declaring that no solution is possible." For more on this read the full NY Times report here.

In February Israel's Cellbrite made it known that it was able to unlock all iOS versions up to 11.2.6.

A spokesperson for Cellebrite stated: "With its service offering, Cellebrite can retrieve (without needing to root or jailbreak the device) the full file system to recover downloaded emails, third-party application data, geolocation data and system logs. Agencies can either provide the device already unlocked, furnish the known passcode, or use Cellebrite's Advanced Unlocking Services to unlock the device. Once the device is unlocked and/or extracted, it is returned to the originating agency. Any extracted data is also sent to the agency in encrypted form to ensure privacy and protect operational information."

While on the topic of cyber security, Apple's CEO Tim Cook kicked of this year's China Development Forum in Beijing yesterday addressing user privacy concerns. Cook has called for stronger privacy regulations that prevent the misuse of data in the light of the controversial leak of Facebook user information.

In the bigger picture, now that Apple has caved on demands for customer data from the Chinese Government, the EU is now working on a Law that could force companies like Apple to give up customer data on Demand. These latest moves have provided the FBI with ammunition to renew their call to Congress for action on this front so that important cases don't go dark any longer.