Home Archives Contact Us Subscribe Twitter MeWe Facebook Patently Mobile
In 2018 Apple will be the 11th Smartphone Brand to cross the 10 Million user Mark in India
As Cook Talks Security in Beijing, the FBI is closer to calling on Congress to enact legislation mandating access to Smartphones 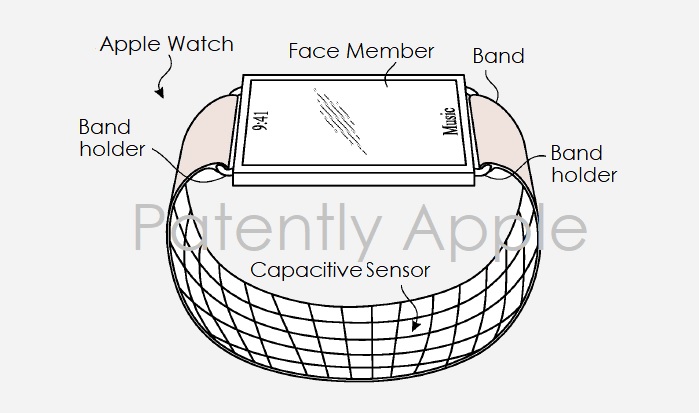 This week the US Patent & Trademark Office published a patent application from Apple that relates to new Apple Watch features on the drawing board. Perhaps the most popular feature will be adding a camera into the face of Apple Watch for Face ID and other applications. The other key features focus on determining the axial orientation of the user's wrist by embedding specialty sensors into an all-new watch band.  These sensors will be able to assist the user in analyzing sports performance specifically related to gripping sports equipment such as a baseball bat, football, golf club and weights. Other sensors are introduced and covered in today's report.

In October Patently Apple posted a patent report covering a future Apple Watch having the ultimate selfie camera built in. In one patent figure describing the overall system, Apple once again lists a future camera as destined for the Apple Watch. Apple's patent FIG. 3 presented below lists the camera (highlighted in yellow) under the 'User Interface' segment. As you'll see later how it relates to Face ID. 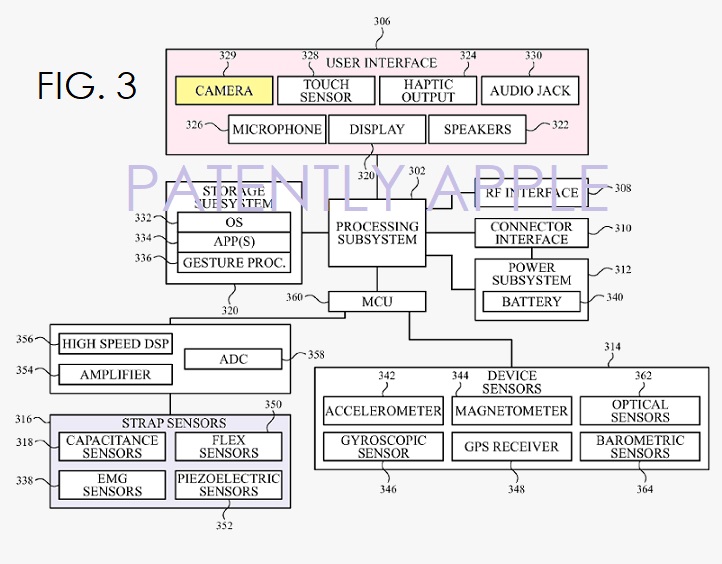 In some examples, a plurality of strain gauges (e.g., piezoelectric sensors) can be included to generate one or more signals indicative of any changes in shape, size, and/or physical properties of the user's wrist.

In some examples, the device can include a plurality of capacitance sensors for increased granularity and/or sensitivity in measuring the amount of tension exerted by the user's wrist.

The systems and methods disclosed can include analysis and feedback to a user regarding the user's performance (e.g., sports performance), noise reduction and/or cancellation, hydration detection for prolonged EMG sensor longevity, and user identification.

Apple's patent FIG. 4B presented below illustrates a perspective view of an Apple Watch having a band including one or more electrodes embedded at least partially within one or more elastic sections;

Apple's patent FIG. 4C presented below illustrates a perspective view of an Apple Watch having a band that can include strain gauge sensors according to examples of the disclosure. 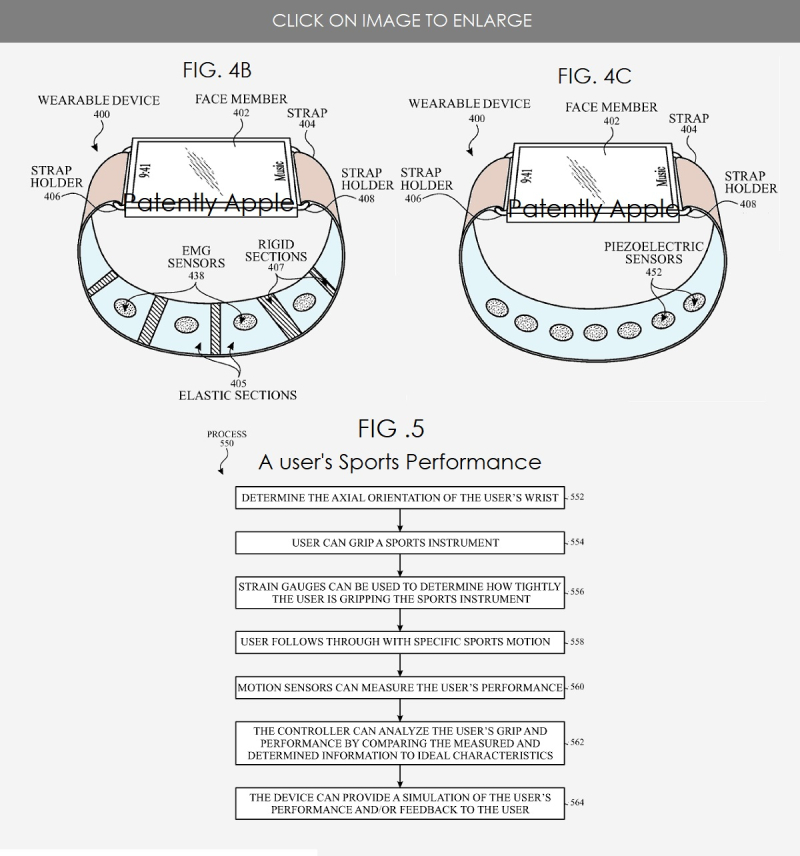 Apple's patent FIG. 5 presented above illustrates an exemplary method for providing analysis and feedback to a user regarding the user's sports performance.

While Apple's patent FIG. 5 provides us with a grand overview in respect to sports performance analysis and feedback, the patent also drills down with a little more detail on this new feature.

The Apple Watch's controller will then analyze the user's grip and performance by comparing the measured and determined information to ideal characteristics. From the comparison, Apple Watch will be able to provide a simulation of the user's performance and/or feedback to the user on how to improve their performance.

One or more EMG sensors can be configured to measure the tension of the user's wrist. Additionally, although FIG. 5 is discussed in the context of strain gauges used to determine the axial orientation, examples of the invention can include other types of sensors, such as capacitive sensors noted in the report below.

The timing of the bicep curl, the user's grip, and the muscle activity can optionally be associated with the user's heart rate determined by, for example, the PPG (e.g., optical sensors) sensors.

The device can analyze the user's performance and can provide feedback and/or, for example, calometric data related to the user's weight lifting performance. For example, the device can inform the user that the user is over rotating his or her wrist during the exercise and/or is gripping the weights too tightly. 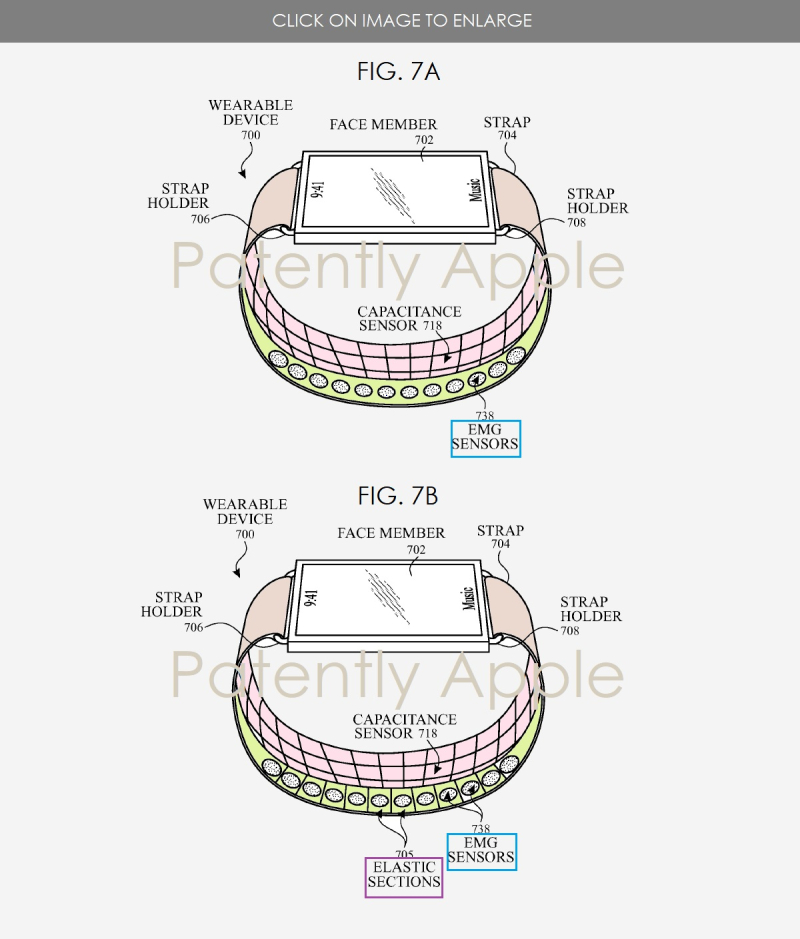 The device can optionally inform the user of the hydration conditions and can ask the user to dry the EMG sensors. When the capacitance sensors detects a level of hydration less than a predetermined level, the controller or processor can allow activation of EMG sensors.

Apple quietly mentions 'User Identification' only twice. They mention it once in their opening summary and again randomly thrown into patent point #21 without any explanation or even context. This is where it's important to note the architecture of the Apple Watch presented in patent FIG. 3 as our first patent figure to highlight.

Obviously this patent was filed before iPhone X's Face ID was made public and the history of this patent goes back to 2016 and so those preparing the text of this patent filing couldn't use Apple's marketing term Face ID. So it was hidden under 'user identification' and in another segment of the patent filing about the camera wherein it's noted that "a user to capture images of nearby objects in the environment, such as a bar code or QR code. In some examples, the camera can be disposed on the front surface of face member (e.g., to capture images of the user)" – with no reference to it being used for identification purposes.

Even though they keep it low key, the patent filing is certainly describing Face ID. Of course miniaturizing the components of their TrueDepth camera onto Apple Watch face isn't going to happen overnight. They may start off with a simple selfie camera, as noted at the top of our report, and then over time elevate it to Face ID.

Apple's patent application was filed back in Q3 2017. The engineers listed as the inventors include Mr. Lor, Apple Watch System Integrator; and Apple's Hardware Engineering Manager Mr. Nangia. Considering that this is a patent application, the timing of such a product to market is unknown at this time.