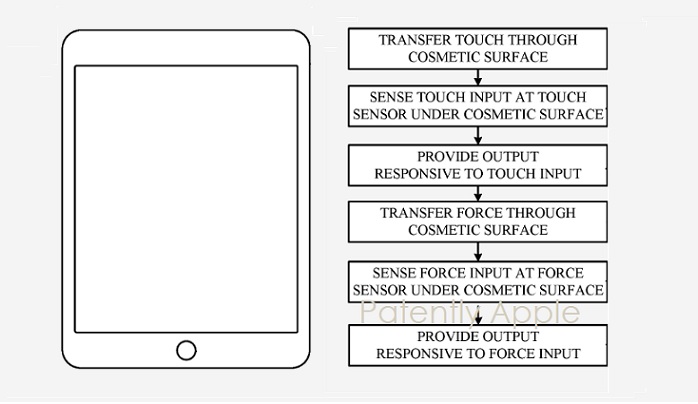 Today the US Patent & Trademark Office published a patent application from Apple that relates to providing future iDevices with new force sensitive rocker switches and buttons. In one case Apple even hints of replacing the digital crown on Apple Watch. The new switches and buttons may be in-line with the body of the device or slightly risen and offer more control using force touch controls.

Apple notes that touch and force sensitive rocker switches and similar multiple type input buttons that can be used in conjunction with electronic devices can provide for multiple different types of input in a simpler and more aesthetically pleasing way.

According to various embodiments, a portable electronic device can have a housing, a processor, a display screen, a rocker switch or other specialized input button located along one side of the housing, and a cosmetic surface that covers at least the entire button and portions of housing proximate the button.

The button can be coupled to the processor and be configured to accept multiple different types of input. The cosmetic surface can transfer each of the multiple types of input there through to the button and also provide a seal to the housing interior.

The touch inputs can include swipes or gestures, as well as simple touches at multiple locations along the button. The cosmetic surface can include a flexure region that permits downward movement of the button. The cosmetic surface can be made of a plastic material, and can be formed by way of a two shot co-molding. The seal to the housing interior can render the device waterproof. The electronic device can be a smart watch, among other possible devices.

While the patent figures are limited to an iPad and Apple Watch, Apple makes it clear that the force sensitive rocker switchers could apply to any Apple device including the iPhone. 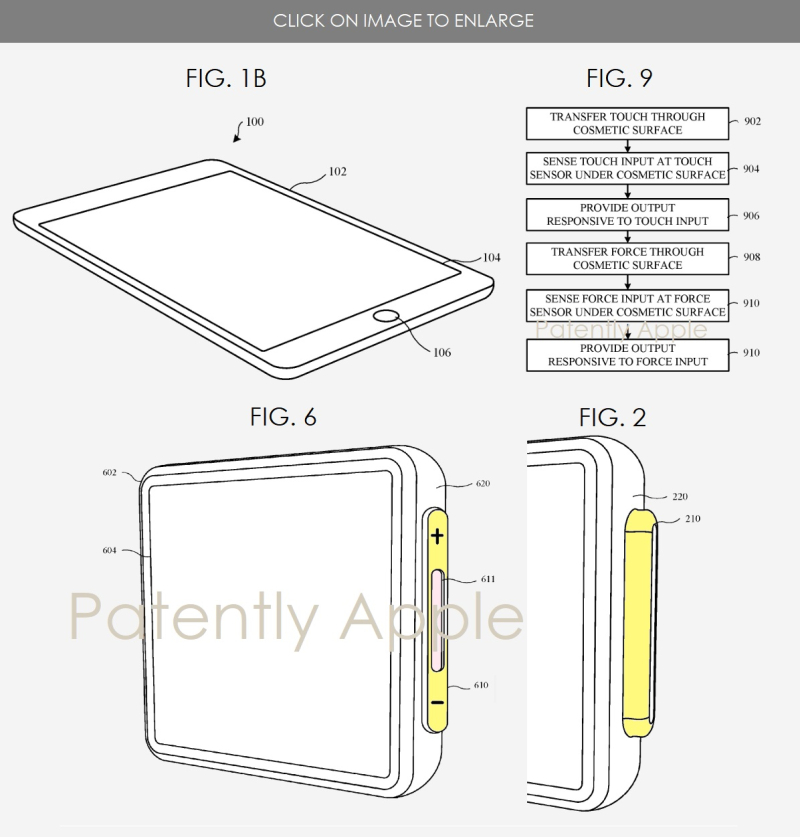 In Apple's patent figures presented above we're able to see two versions or examples of the Apple Watch with different buttons or switches. Apple Watch #600 (FIG. 6) can be substantially similar Apple Watch #200 (FIG. 2) above, with various exceptions in the button #610.

Button #610 can be an alternative specialized multiple input component that is located along a side of housing which could be a touch and force sensitive rocker switch or other similar multiple input type button, and can be elongated and raised above the surface of the housing #602. A cosmetic surface #620 can similarly cover all of button #610 and at least the portions of the housing that are proximate the button.

Button #610 similarly can suitably replace what would ordinarily be multiple separate input components, such as a separate scroll wheel (likely referring to the digital crown) and push button. The cosmetic surface #620 can be identical or substantially similar to cosmetic surface #220 and as such can cover the entire button #610 and at least the portions of the housing #602 that are proximate to the button, can result in no apparent gaps or breaks between the button and the housing, and can provide a seal for the interior of the electronic device, which seal can result in the device being waterproof or water resistant.

Unlike button #210 of FIG. 2, button #610 can be shaped differently, and can also provide for additional locations for force inputs. For example, button #610 can have a detent #611 or lowered profile at the center of the button. This can allow for a user to sense more easily the various locations on the button by feel, such that a suitable input can be provided at the desired location on the button.

An additional location for force inputs can include a third tact switch or dome loaded button at the center detent 611 of button 610, for example.