In February, Patently Apple posted a patent report titled "Apple Granted a Patent for a Dual Display MacBook or Second Generation iPad Pro." Today we're first again in reporting that the US Patent & Trademark Office has published a patent application from Apple that greatly advances their keyless keyboard project in greater detail with patent figures illustrating multiple morphing interface options that are on the drawing board.

One such interface that is illustrated is one that will be able to control iTunes / Apple Music. While the illustration is clear, it's limited. The second display could of course provide greater details such as colorful equalizer controls and much more. Apple also quickly mentions an interface with virtual "gaming inputs" as another possible option supported by this keyless keyboard.

The other major advancement in this project focuses on delivering realistic touch on this virtual keyboard. The second display is designed to be flexible and in-tune with force sensors and a unique haptic board beneath the second display.

Lenovo who brought a virtual keyboard notebook to market, as shown in our cover graphic, simply used a regular LCD display with no give for typing, making it more like a smartphone's virtual keyboard. Apple is going out of their way to provide a whole new experience closer to the feel of a physical keyboard.

The keyboard may be incorporated into an electronic device that includes a display coupled to the enclosure, wherein the display is distinct from the keyboard. The input surface may include input regions representing character input keys, and the first actuator and the second actuator may be configured to provide haptic feedback to a user to induce a sensation representative of a mechanical key.

One example of such an input device is a keyboard that does not have mechanical or movable keys. Instead, the keyboard may have a flat, keyless input surface, such as a glass or metal layer, and may include touch and/or force sensing systems to determine when a user touches and/or presses on the surface. Haptic actuators may provide physical feedback to indicate that a user has pressed the keyless surface with sufficient force to register an input. The haptic actuators may induce a physical sensation that is similar to or representative of a mechanical key. For example, when a user presses the surface of the keyboard with sufficient force, the surface may vibrate or otherwise move to indicate to the user that the intended input has been registered.

Apple's patent FIG. 14 below depicts an example process of detecting a key press; FIGS. 15A to 15C depict generation of input regions according to user interaction. Users will be able to choose a straight keyboard setup or one that is ergonomically laid out as shown in FIG. 15C. 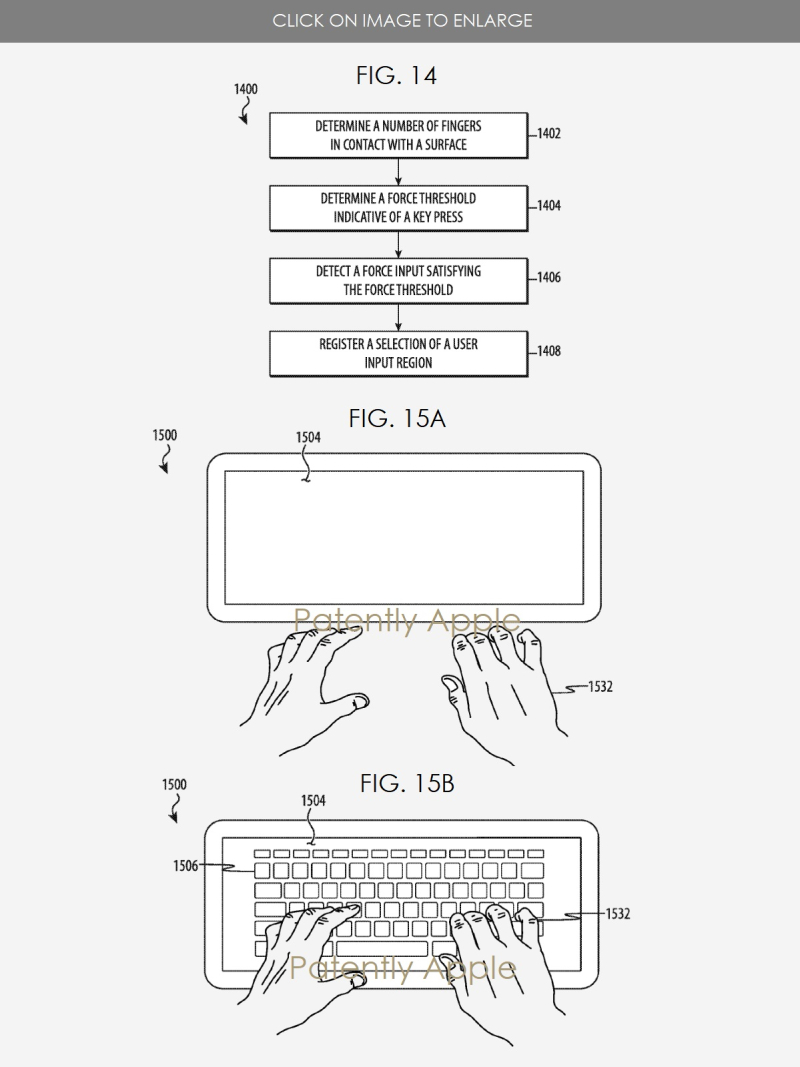 An input device that includes force sensing, haptic outputs, and an adaptive display may be used to define user interfaces other than traditional keyboards. Apple's patent FIG. 16 above depicts an example input device #1600 incorporated within a notebook or laptop computer in which an alternative user input is produced on an adaptive input surface #1604. The interface supports iTunes / Apple Music.

Apple's patent FIGS. 18-19 depict example embodiments of input devices such as an iMac and iPad Pro. 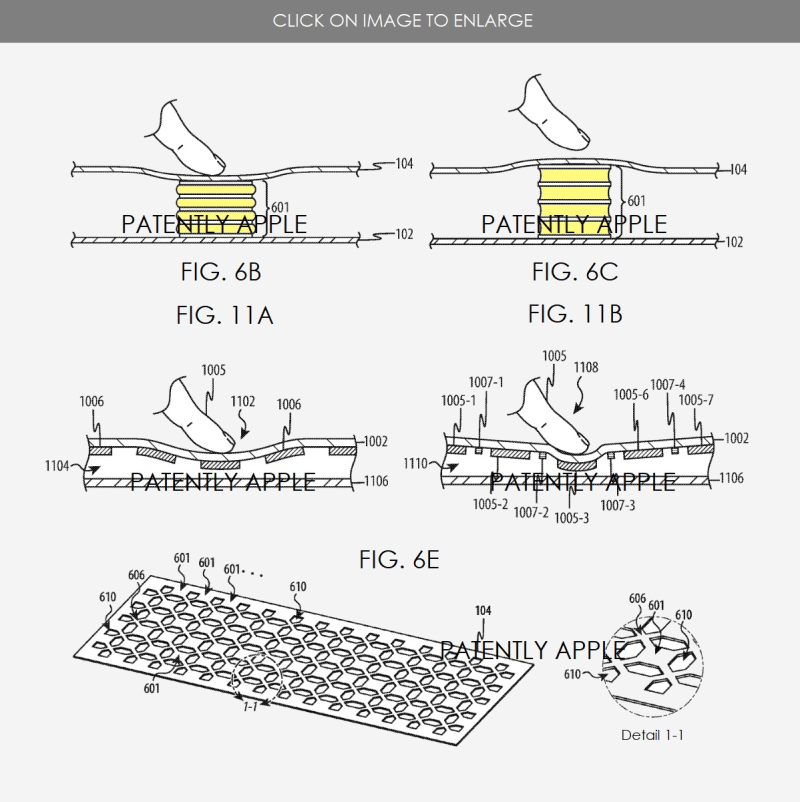 Apple notes that FIG 6B depicts an example haptic actuator #601 that may produce localized deformations or deflections of a cover display. Apple further notes that the haptic actuator may be configured to retract and/or extend (FIG. 6C) vertically (as illustrated above) to impart tactile outputs.

Apple's patent FIG. 6E noted in the graphic collage above shows us another example arrangement of haptic actuators #601 relative to the cover. In this example, the haptic actuators may be formed from a single sheet or otherwise interconnected via one or more connecting elements #606.

Apple's patent application was filed back in Q3 2017 and published today by USPTO. A few of the inventors listed on this patent include Zheng Gao, Sr. Product Design Manager; Ken Silz, Input Technologies; and Alex Lehmann, Product Design Engineer - Finite Element Analyst. Other engineers on this project have moved on to Tesla, Amazon and IDT.

Patently Apple presents a detailed summary of patent applications with associated graphics for journalistic news purposes as each such patent application is revealed by the U.S. Patent & Trade Office. Readers are cautioned that the full text of patent application 20180074694 should be read in its entirety for full and accurate details. About Making Comments on our Site: Patently Apple reserves the right to post, dismiss or edit any comments. Those using abusive language or negative behavior will result in being blacklisted on Disqus.