The U.S. Patent and Trademark Office officially published a series of 49 newly granted patents for Apple Inc. today. In this particular report we cover Apple's latest patent win relating to Augmented Reality. It's an invention that may have been incorporated into Apple's ARKit being that Apple acquired Metaio's intellectual property and engineering for their leadership in augmented reality. Today's patent is about a method of creating AR for use with devices like Apple's iPhone, iPad and future smartglasses which this patent describes.

Apple's newly granted patent covers their invention relating to a method for representing virtual information in a view of a real environment comprising the steps of providing a system setup with at least one display device, wherein the system setup is adapted for blending in virtual information on the display device. The invention also relates to a computer program product comprising software code sections for performing the method.

The overlaid or blended in virtual information may be, in principle, various items of virtual information. For example, an item of virtual information which could enhance information of a real environment may be a point of interest, as for example known in map or navigation applications. A point of interest (POI) may represent a location of a real object of the real environment (e.g., a building or a landmark) and often includes digital content that is related to the real object. For instance, the location is a global location (e.g., a geo-coordinate such as a 2D coordinate of longitude and latitude, or a 3D coordinate of longitude, latitude and altitude) or a post address (e.g., a floor number, street, postcode, country). The post address and the global location could be converted to each other. The digital content of the POI could contain various data, such as a name, description, and contact related to the real object.

One major function of augmented reality systems is to overlay items of virtual information, such as points of interest (POIs), to a view of the real environment. This is particularly useful and popular in location-based (mobile) augmented reality applications, such as tour guidance for exploring the urban environment or even enhancing indoor mapping.

Most data sources for POI information provide the information in relation to a point in the real world, not as a 3d model with more than one point or vertex. This invention is well suited for handling the visualization of items of virtual information, which are described by latitude, longitude and optionally altitude and additional meta-information consisting of text and 2D image information.

Several methods have been developed for improving visual perception and usability of blending in or overlaying POI information to a view of a real environment in augmented reality applications.

Illustrated below, Apple's Patent FIG. 8 shows us an exemplary image of the real environment acquired at the viewing point with the field of view; FIG. 9 shows the scene of FIG. 8 in which Points of Interest (POIs) are opaquely overlaid to the image. 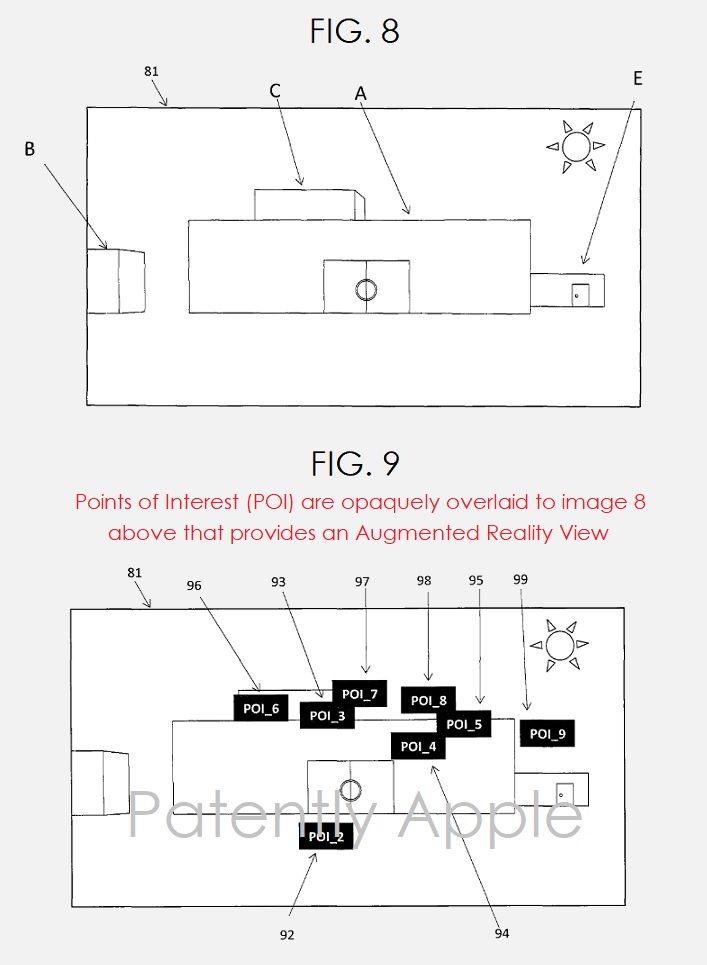 Apple's granted patent 9,922,446 was originally filed in Q2 2014 and published today by the US Patent and Trademark Office. To view other Apple AR patents, see our Augmented and Virtual Reality Archive.