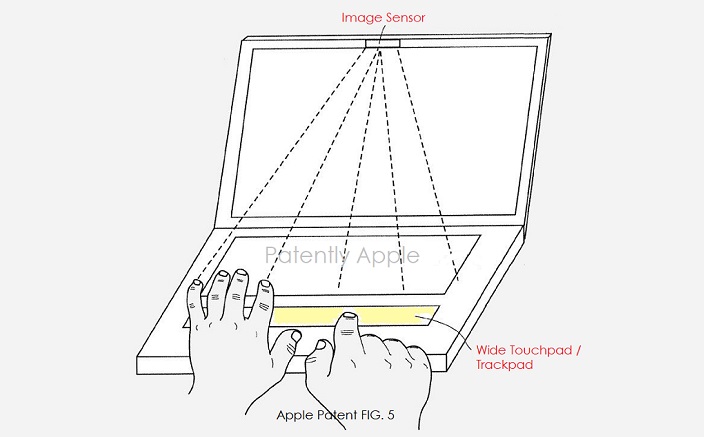 Today the US Patent & Trademark Office published a continuation patent from Apple that covers new additions to their long standing wide trackpad for MacBooks invention that covers new sensors.

Today's continuation patent was falsely reported on by the 'AppleWorld.Today' blog earlier today by identifying it as a "granted patent" and providing a fake patent number. The false report humorously stated that Apple's patent hints at a bigger touchpad. The reality is that Apple has working diligently on this invention for close to 14 years which is a far cry from "hinting."

Apple's invention has been plugging along for close to 14 years now and during that time Apple has been awarded several granted patents for various iterations of their invention in 2007, 2012 and again in 2016. The original patent filing goes all the way back to August 2004.

In today's "continuation" patent published by the U.S. Patent Office, Apple is shown to be adding new technology to their long standing project.

The additions to Apple's invention could be found in their patent claims. To get the full picture first hand, compare their last patent claims to those found in today's patent filing to see what's actually different, claim by claim.

Roughly speaking, their new claims focus on two new and entirely different "sensor arrays," associated with the wide trackpad that are able to control different operational states. That could relate to switching between a first power consumption state and a second power consumption state, as noted later in the invention. But that's not the only interpretation.

The problem with patent claims is that they're written in legalese which isn't always clear cut. Since previous work on this invention has never mentioned sensor arrays, proximity sensors or sensors that could detect hovering, it's difficult to nail down where the sensor arrays will be applied as there's no context or exacting examples to follow.

For instance, the patent covers various means of delivering a wide trackpad. One method is to simply present users with a very large trackpad area divided into three distinct touch areas. The different trackpad areas could accommodate different actions.

An alternative method is to provide a special camera that could track hand movements along the full width of the trackpad as noted in patent FIG. 5 below. Could that suggest the camera is capable of interpreting hand gesturing? Yes, it's very likely it could mean that. 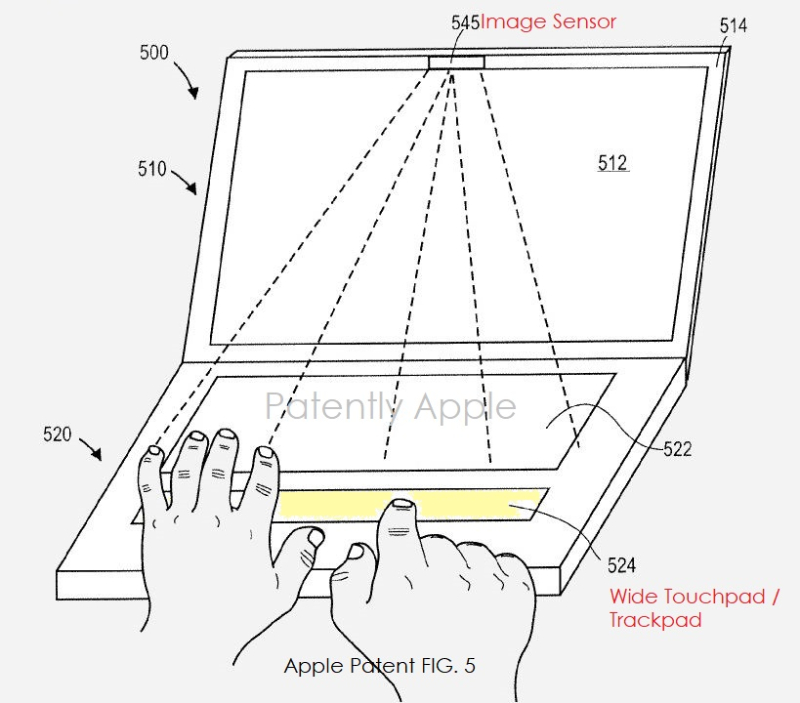 Why is it likely? Apple invested in Finisar and its VP and GM spoke about the plant last Saturday. He pointed to making VCSEL's for facial recognition and 'gesture recognition."

Face ID for iPhone X was developed by Apple's Israeli PrimeSense team and they are continually filing patents for their 3D depth camera to handle gesture recognition (one, two, three and four).

In fact another such patent was published today by the U.S. Patent Office wherein it's noted that "The 3D map of the user's hand (and/or other parts of the user's body) may be used in a gesture-based computer interface." The patent covers an image sensor associated with their camera and illumination system which supports Apple's patent FIG. 5 of the wide trackpad patent.

At the end of the day Apple didn't "hint" about their wide trackpad, they added serious new dimensions to their invention, and one that is very much in tune with current PrimeSense technology that has been proven to work with Animojis by capturing a user's face in real-time and directly applying it to a character. In that context, capturing hand gesturing isn't that far-fetched any more.

Considering that this invention has been ongoing for 14 years, the timing of such a product to market remains an open question. Patently Apple covered this invention (at least twice) in 2009 and again in 2012 as granted patents.

Shedding a little more light on the project, Patently Apple posted a patent report covering a similar invention concept back in 2016 titled "Apple is focusing on a Game Changing Notebook Design." In that report we covered another wide trackpad area concept from Apple where that area could be reconfigurable to add such interfaces as a numeric keypad or game controls. 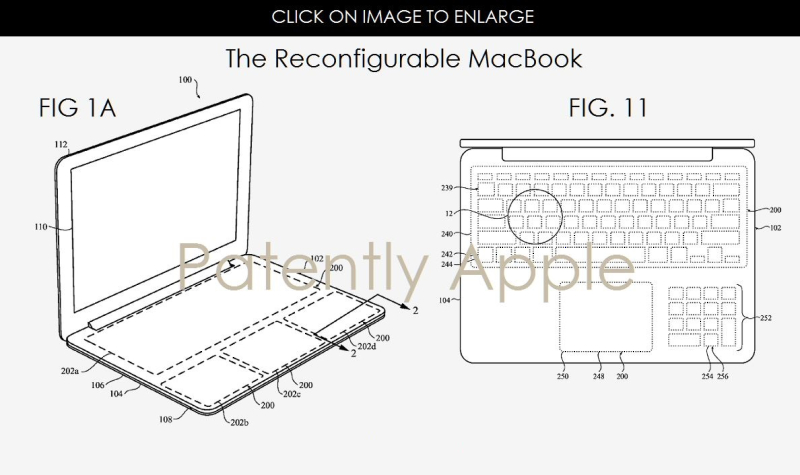