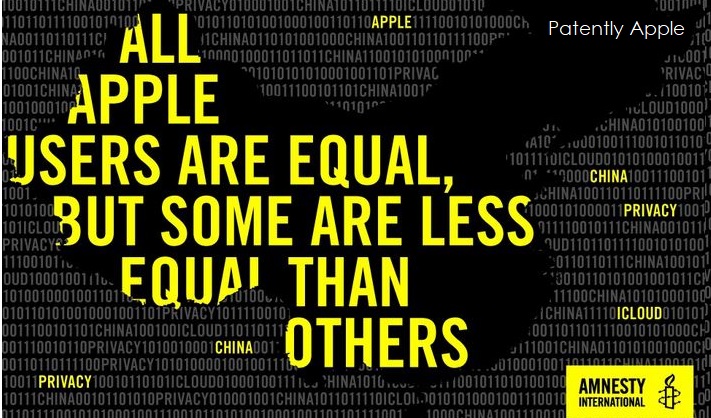 In January Patently Apple posted a report titled "Apple Disturbingly Announces that their Chinese Partner for iCloud Services will have equal access to Chinese Customer data" and then followed up with a report in February titled "Apple's iCloud in China: When Profits Threaten Privacy." Our report noted that Amnesty International was accusing Apple of betraying Chinese iCloud users and covered it extensively.

Today Amnesty International has begun a new campaign against Apple. The group notes that they're "launching a new social media campaign targeting Apple over its betrayal of millions of Chinese iCloud users by recklessly making their personal data vulnerable to the arbitrary scrutiny of the Chinese government."

In a nod to Apple's iconic '1984' advert, the campaign takes an Orwellian theme with the line "All Apple users are equal but some are less equal than others". It launches as the tech company's chief executive, Tim Cook, touches down in Beijing to co-chair a prestigious business forum.

Apple's influential '1984' ad challenged a dystopian future but in 2018 the company is now helping to create one. Tim Cook preaches the importance of privacy but for Apple's Chinese customers' these commitments are meaningless. It is pure double-think.'"

The report further noted that "By handing over its China iCloud service to a local company without sufficient safeguards, the Chinese authorities now have potentially unfettered access to all Apple's Chinese customers' iCloud data. Apple knows it, yet has not warned its customers in China of the risks.

On 1 February, Amnesty International wrote to Apple raising our concerns about the changes and asked the company to provide further information. Apple has yet to respond to the request.

Bequelin adds an Animal Farm-like quote by stating that "While Apple may claim it treats its customers equally, some are less equal than others."

Bequelin further noted that "Profits should never threaten privacy. It's time for Apple to Think Different when it comes to the privacy of its millions of Chinese customers. Apple needs to be much more transparent about the risks to privacy posed by recent changes to the iCloud service in China." For more on this, read the full Amnesty International report here.