During Tim Cook's summary for the quarter (Fiscal Q1 2018) on the topic of Apple Watch he stated: "It was our best quarter ever for the Apple Watch with over 50% growth in revenue and units for the fourth quarter in a row and strong double digit growth in every geographic segment. Sales of Apple Watch series 3 models were also more than twice the volume of series 2 a year ago. Apple Watch is the most popular smartwatch in the world and gained market share during the quarter based on the latest estimates from IDC."

A new report by Canalys states that Apple Watch shipments beat expectations, topping 18 million in 2017, up by more than 54% on 2016.

The Series 3 was the key growth driver, as total shipments of the latest version of Apple's Watch were just under 9 million, making up nearly half of all shipments in 2017.

Apple's Q4 performance was impressive in itself, as shipments grew by more than 32% over Q4 2016 to 8 million, the highest ever number of shipments in a single quarter. 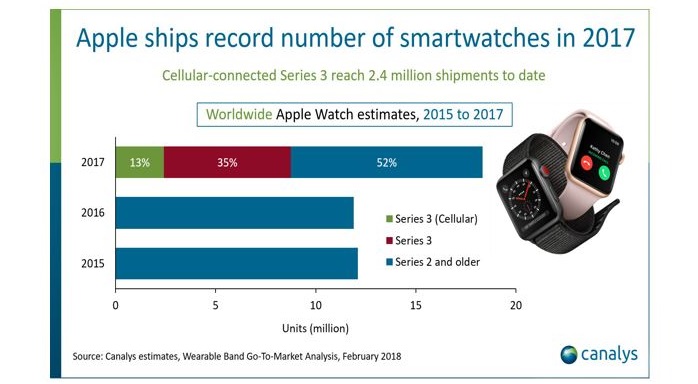 Vincent Thielke, Research Analyst at Canalys stated that "The cellular version of the Apple Watch was in strong demand in the US, Japan and Australia, where all major operators stocked it in time for the holiday season.

The Apple Watch Series 3 is the fastest-selling LTE wearable on the market, with shipments doubling quarter on quarter to reach 1.6 million."

There's a lot of room for Apple's LTE smartwatch to grow in Europe as there was a limited operator selection in the UK, Germany and France stifling the growth in Q4.

Thielke added that "Moving into new markets, such as Singapore and Hong Kong in Q1 2018, just in time for Chinese New Year, is a good move."