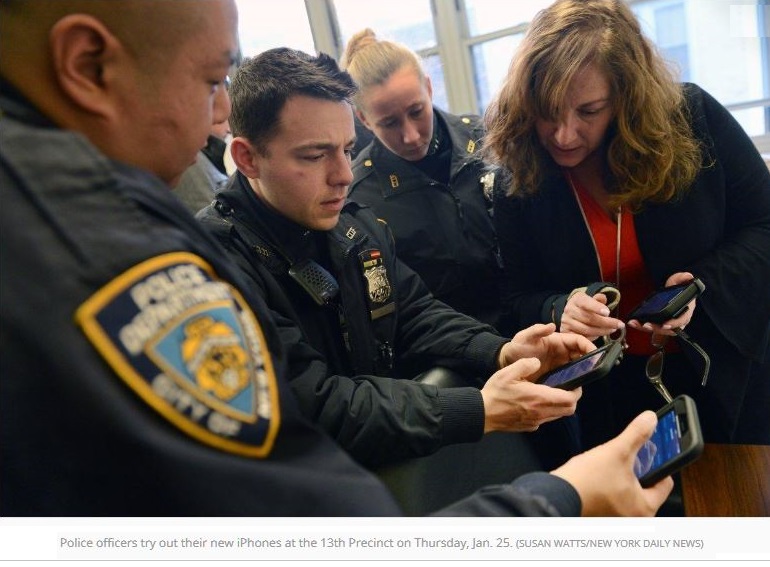 In August Patently Apple posted a report titled "NYPD reportedly to Replace Millions Worth of "Useless" Microsoft-Nokia Smartphones with Apple iPhones later this year." The report noted that 'New York's mayor Bill de Blasio had more egg on his face. The mayor gave the Microsoft-Nokia smartphones his blessing and approval while touting the move as "a huge step into the 21st century." Just months after the last phone was handed out, officials made known their new plan to begin replacing them all with brand-new iPhones by the end of the year, according to the New York Post.

New York Daily News is now reporting that "An old police academy in Gramercy Park has become the city's newest Apple store — one that only serves an exclusive group of customers.

There are no glass walls and brightly lit tables with the company's latest products on display to be found. But there's still a line out the door — of cops waiting for their department iPhones, the NYPD's latest tool to combat crime in the digital age.

As the department switches over from Nokia phones to iPhones, the rollout has begun in Patrol Borough Manhattan South, which spans from Wall St. to 59th St.

NYPD Deputy Commissioner for Information and Technology Jessica Tisch said that "We're seeing a lot of excitement," about the new iPhones.

Citing better security and speed, the iPhones started popping up at local precincts just before Christmas.

Cops in the Bronx and Staten Island already received the iPhone 7 or 7 Plus, depending on their screen-size preference.

The iPhones, much like their Nokia predecessors, mark a quantum leap in policing, where everything from 911 dispatches to criminal background checks and real-time video can be quickly accessed.

The iPhones are also being used to fill out some summonses, accident reports, aided cards and domestic violence reports."

Police Officer Christopher Clampitt said that he truly feels like it's the ultimate tool to have as a patrol cop. For more, read the full NYDailyNews report here.