In the Detachables Market in Western Europe Apple's iPad Pro Continued to be the Leader in Q4, Especially in the Enterprise 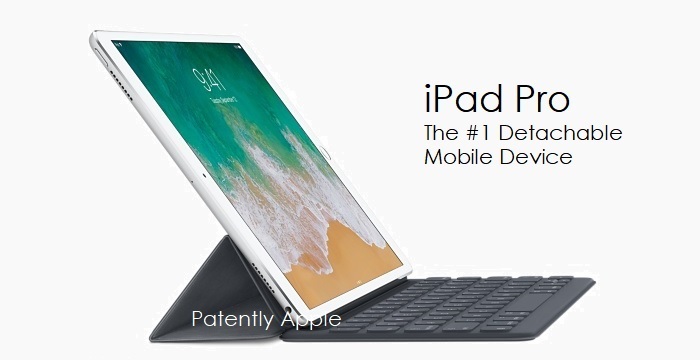 On February 5th Patently Apple posted a report titled "Apple's iPad Pro Continues to be the World's #1 Detachable Tablet." In the latest IDC report about detachables centers on Western Europe statistics. Overall, this device segment continued to decline in 2017 by 13.1%. 10.6 million detachables were sold in Q4 2017. The leader in this segment continues to be Apple. As noted in the chart below, Apple took 24.1% market share. Apple only declined by 1.0% while Samsung declined by 5.2%.

Detachable tablets experienced growth of 8.5% in the enterprise while consumer sales slumped. Daniel Goncalves, senior research analyst at IDC, noted that Apple's results were driven by good traction of the newer iPad Pro detachables, particularly among professionals and prosumers, through notebook replacement.

Goncalves further noted in the report that "Profitability is increasingly becoming the focus among the most important tablet manufacturers. The performance of Apple and Samsung, the two main players in the Western European market, together representing over 40% of all tablet shipments, reflects the increasing concern for value over volume. Both posted double-digit growth in revenue YoY, despite the single-digit declines YoY in units."

Additionally, this device is appealing to tablet users upgrading to a premium device with keyboard capabilities and enhanced specs. "This is a trend we observe across the whole device spectrum, where consumers are increasingly willing to invest more to obtain better user experiences, and to be able to enhance their device's longevity," said Goncalves.

In the larger picture, Apple's CEO stated during their last financial conference call, that "It was the third consecutive quarter of growth for iPad revenue thanks to the strength of both iPad and iPad Pro. "