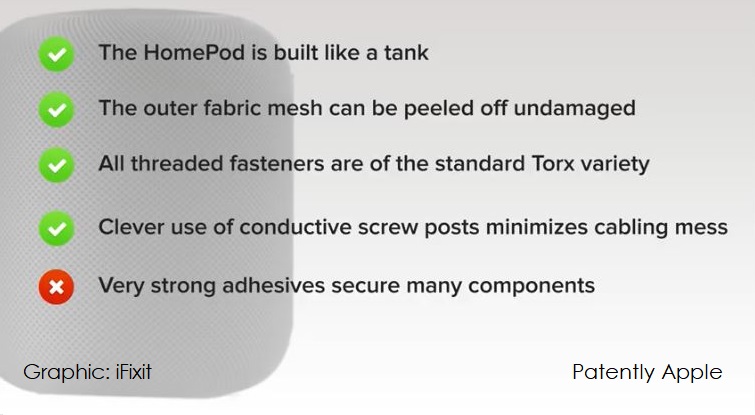 As always, the iFixit teardown video is another interesting one and it's made clear that repairability scores a hands down 1 with repairs costing 85% of the cost of a HomePod. In other words if something goes wrong after your warranty, just buy a new on because a repair and time wasted isn't worth a fix. When iFixit says that the HomePod is built like a tank, you'll see why in the video very quickly.

For those sitting on the fence on whether to take the plunge and buy HomePod, we provide you with two completely different takes on the sexy little smart speaker. iJustine is one big HomePod ad that's bright and bubbly. On the flip side, Armando Ferreira has a very frustrating experience with HomePod and Apple's customer service. Ferreira is both an Apple and Android fan and was completely disappointed with HomePod. Between the two takes on HomePod you may find something to help you pull the trigger and buy it or hold out for HomePod 2.

One More Thing: Apple takes less Profit for HomePod to get in the Game

According to a new report published late yesterday, Apple's HomePod costs $216 to build and generates thinner profit margins than other products like the Apple Watch and iPhone, according to analysis by TechInsights.

Given the HomePod’s $349 price, that $216 cost suggests Apple is generating margins of about 38 percent, according to the product analysis firm. That compares with margins of 66 percent and 56 percent for the Google Home and Amazon Echo, products that compete in the smart-speaker market, but offer lower audio quality, according to the firm’s estimates.

Al Cowsky, TechInsight’s costing manager said that "Apple is compressing their margins a bit, wanting to go big or go home. In doing so, I suspect they reduced the selling price from a normal Apple margin in order to sell more units on volume." Read the full Bloomberg report for more.