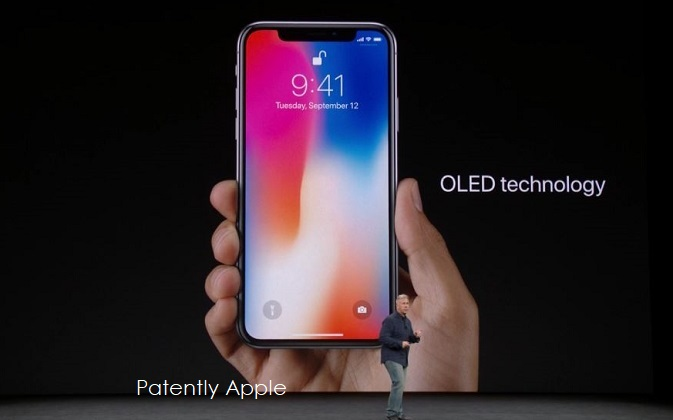 A story out of Japan on Friday stated that "Other smartphone makers, who Samsung had hoped would incorporate OLED panels, have been slow to make the transition due to their expense and are sticking to liquid crystal displays."" Apparently that reality doesn't sell stories, so the Nikkei Asian Review decided to just throw in Apple as being Samsung's problem to make the story a mover.

Smartphone sales fell in China overall in Q4 and yet Apple was able to buck the trend with the iPhone X being the number one smartphone around the world. In fact Kantar reported that iPhone X sales in Urban China were staggering.

During Tim Cook's summary for the holiday quarter he noted: "Our growth was broad based and a key driver was iPhone which generated it's highest revenue ever. iPhone X was the best selling smartphone in the world in the December quarter according to Canalys and it has been our best selling phone every week since it launched."

In late January Patently Apple posted a report titled "Apple to end Samsung's exclusive OLED contract and Shift to a new L-Shaped Battery with Increased Capacity." In that report we also noted that China's BOE and Sharp were vying for Apple's OLED business.

But somehow the blame continually shifts back to Apple being the real problem due to cutting back on orders for OLED display for calendar Q1.  Even though iPhone demand annually drops after the holiday quarter, somehow it's always viewed by the Nikkei that this is a shock and sign of trouble for Apple.

On February 8th we reported that in Q4 Apple surpassed Samsung to become the #1 smartphone brand in the world. I guess Samsung Display didn't sell as many OLED displays to their own Samsung Electronics division. That very point was echoed by British Research company IHS who stated that "the number of OLED smartphone panels Samsung internally sources for its own smartphones fell year on year in 2017."

Yet in the end, the Nikkei focuses back on Samsung's OLED plant failures as being caused by Apple and forgets the reality that Samsung failed to win OLED orders from Chinese vendors like Oppo, Vivo or Xiaomi. It's quite a hilarious twist. To make it funnier, the Nikkei Asian Review titled their report "OLED panel glut looms as Apple slashes iPhone X production." Oh my, the fake drama has my heart pounding – ha!.