Apple invents new Flexible Support Structures that could be applied to a Future iPhone, MacBook, iMac and more 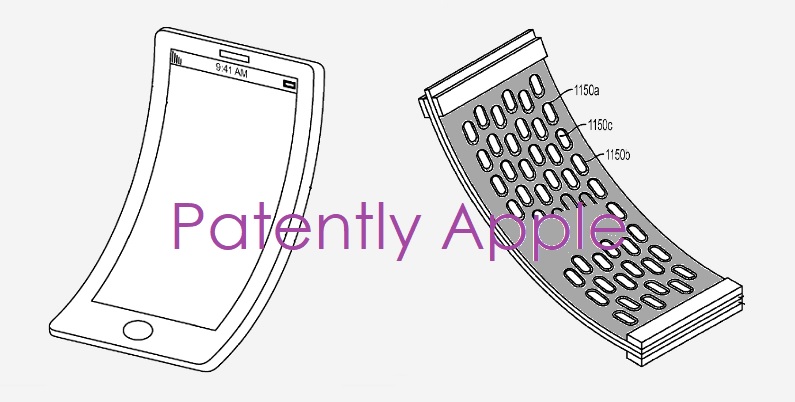 Apple's work on flexible devices began in 2011 with their first patent surfacing publicly in 2013. That same patent was later granted in 2017. Another major patent for flexible devices surfaced in 2013 covering a bracelet styled device with a wraparound display along with a possible iPhone with a bended display. Apple updated that invention last year.

Today the US Patent & Trademark Office published a patent application from Apple that relates to new kinds of flexible hinges and support structures that could be applied to both accessories like an iPad cover to devices such as a MacBook, iMac and more.

The iPhone: Apple's patent FIG. 18 presented below illustrates a parallel perspective view of a potential embodiment where the adjustable support structure comprises the body of a bendable and portable electronic device, such as an iPhone. 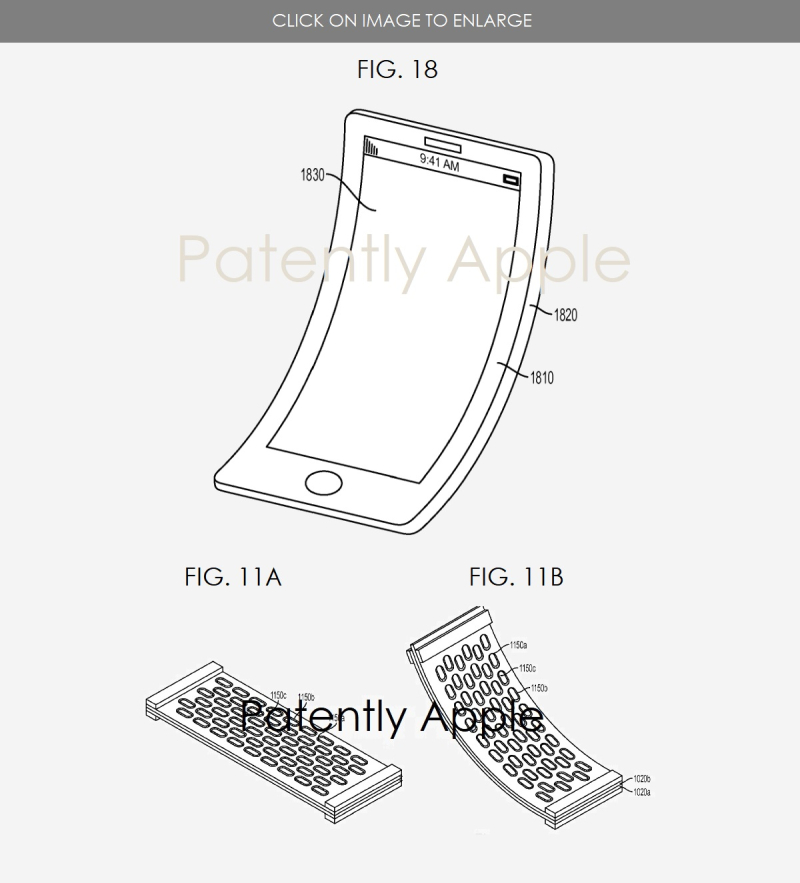 Adjustable Support Structure: Apple's patent FIG. 11A presented above is a parallel perspective illustration of an embodiment of an adjustable support structure in a relaxed position with a pair of substantially parallel layers where the upper layer has a plurality of oblong openings and the bottom layer is formed with oblong inserts that fit within the openings, the remaining volume is filled with a low durometer elastomer: FIG. 11B is a parallel perspective illustration of the embodiment of FIG. 11A in a flexed position.

MacBook: Apple's Patent FIG. 14A below illustrates a parallel perspective view of a potential embodiment where the adjustable support structure provides support to the monitor portion of a MacBook; FIG. 14B shows the lid of the MacBook closed.

More specifically, patent FIG. 14A shows an embodiment where three independent support structures #1410, #1420 are used to support the load of an open laptop screen. FIG. 14B shows the embodiment of the laptop computer in closed position. In certain embodiments such as that shown in FIG. 14A, necessary wiring or electrical cabling required for the operation of the laptop screen may be fed through the interior of one or all of the separate support structures. 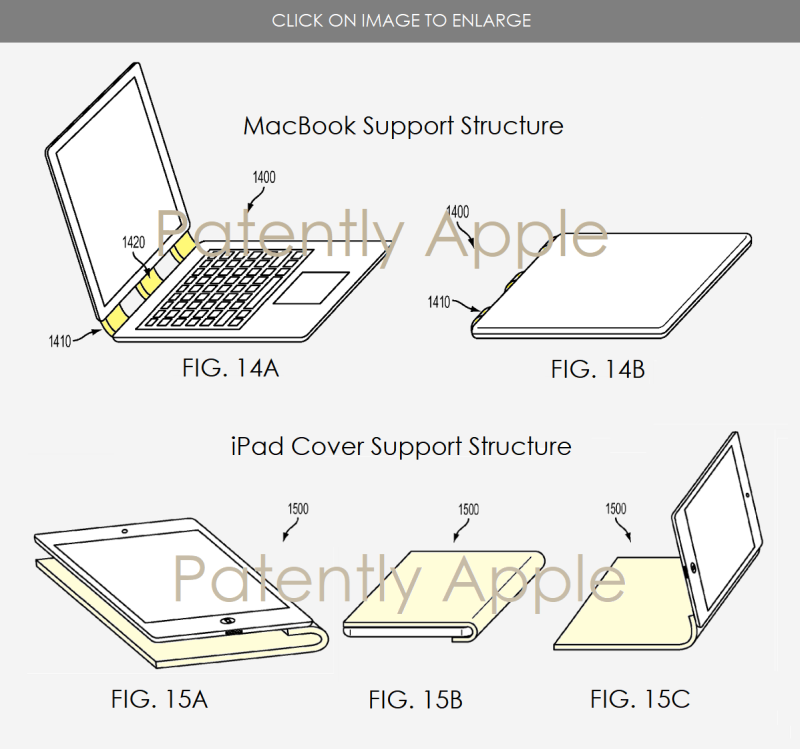 The iMac: Apple's patent FIG. 16A illustrates a parallel perspective view of an adjustable support structure embodiment to support the load of an iMac Desktop screen. Patent FIG. 16B shows us a cross section of iMac. In certain embodiments such as that shown in FIG. 16A, necessary wiring or electrical cabling required for the operation of the desktop screen may be fed through the interior of the support structure. 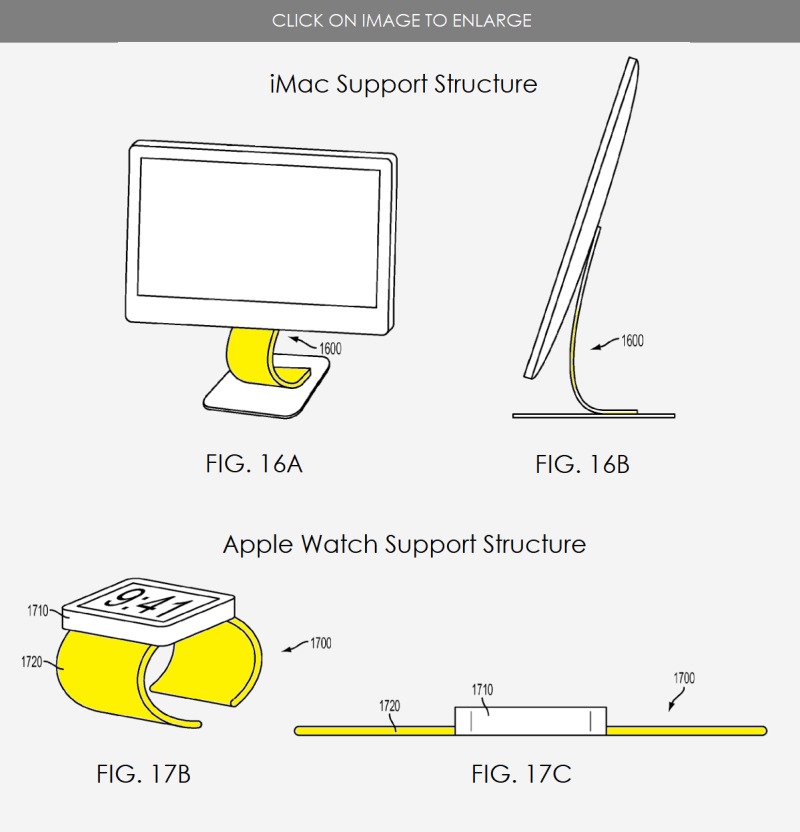 Apple Watch: The adjustable support structure noted in patent FIGS. 17B AND 17C is shown to work with Apple Watch.

Generally, the adjustable structure may include two rectangular and parallel layers of flexible material that are joined by a partially flexible coupling positioned between the layers. The coupling permits the layers to longitudinally displace while it prevents the layers from perpendicular displacement. Along the breadth of one longitudinal end, the coupled layers are prevented from all displacement by a rigid fixture. Along the breadth of the opposite longitudinal end the coupled layers are permitted to longitudinally displace only against compressive friction provided by a displacement brake.

In this configuration when a bending force is applied to the adjustable structure, the layers bend along different radii which in turn encourages the layers to longitudinally displace in different directions. The layer bent along the larger radius (i.e. outer layer) is encouraged to retract within the displacement brake at the same time the layer bent along the smaller radius (i.e. inner layer) is encouraged to extend through the displacement brake. When the bending force is removed, compressive friction of the displacement brake retains the extension and retraction of the layers, which in turn retains the deformation of the structure. Any load force may be applied to the deformed structure such that the sum of the load force and elastic restoring force of the structure itself are less than the bending force applied to initially deform the structure.