Late this afternoon Patently Apple posted a report titled "Apple Patent Reveals Advancing Apple Pencil to work with Non-Touch Surfaces and supporting 3D & AR Editing Apps." Apple's patent application revealed how one of their engineering teams have designed an advanced Apple Pencil design that will allow it to work with an iMac (any Apple desktop) or MacBook by simply drawing or writing on the surface of an office desk or other surfaces. The Pencil transmits signals to the Macs via receivers built into the displays of a Mac.

In a second, less dramatic invention, Apple reveals that technically speaking, Apple Pencil could one day be able write directly on metal. So instead of using the MacBook's trackpad, a user may be able to write or draw in the palm rest area of a MacBook.

I delayed posting a report on this patent that surfaced last week because it's not clear cut. While it's extremely technical it never really spells out how it could be specifically used by Apple. It describes the technology in depth but is vague in its execution. But there's just enough to give you an idea of how it could play out.

Position of an object touching a surface can be determined using time-of-flight (TOF) bounding box techniques, acoustic image reconstruction techniques, acoustic tomography techniques, attenuation of reflections from an array of barriers, or a two dimensional piezoelectric receiving array, for example. Acoustic touch sensing can utilize transducers, such as piezoelectric transducers, to transmit ultrasonic waves along a surface and/or through the thickness of an electronic device.

Technically, the metal housing or metal surface could translate to the aluminum of a MacBook's palm rest area which would be very convenient to be able to accurately sign a document or draw something quickly into a memo or add an arrow or star in a document for emphasis with ease using the palm rest area to complement the trackpad functionality.

It could also mean eliminating the trackpad altogether so that the appearance of the notebook would be much cleaner without requiring a visual trackpad area, as the full width of the MacBook under the keyboard could be one giant touch and Apple Pencil sensitive area.

On another aspect of the invention, Apple adds another dimension to iDevice displays in context with overcoming water or rain on a display which usually will reduce touch screen sensitivity. Apple notes that "In some examples, an acoustic touch sensing system can be configured to be insensitive to contact on the device surface by water, and thus acoustic touch sensing can be used for touch sensing in devices that are likely to become wet or fully submerged in water. 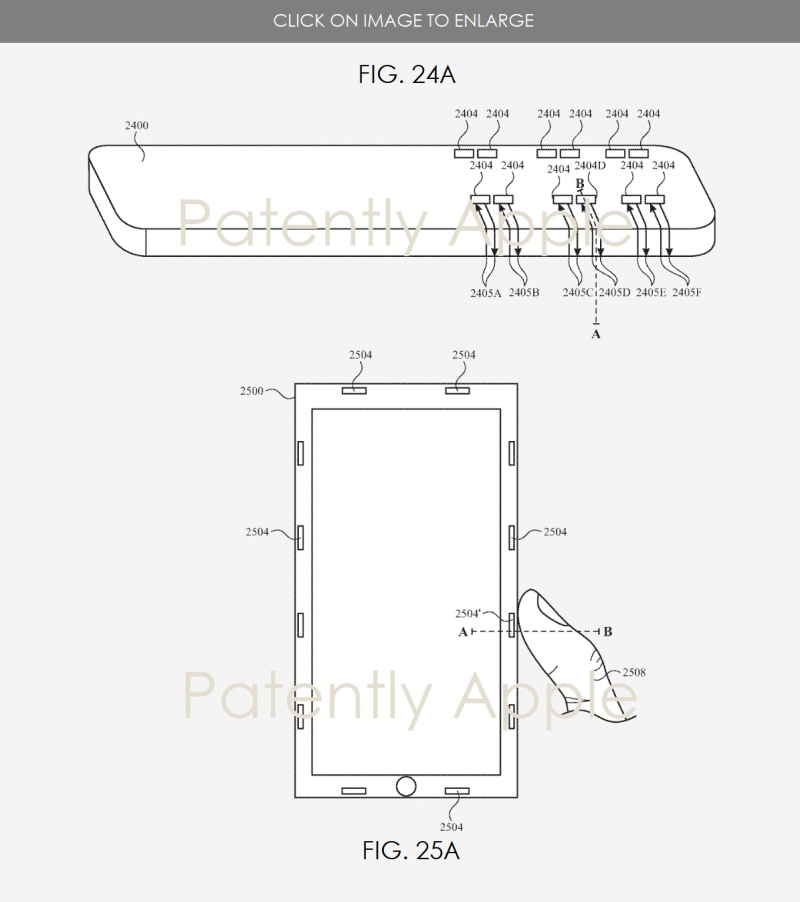 Apple's patent FIG. 24A noted above illustrates an exemplary implementation of an acoustic touch sensing system for detecting contacts along edges and/or along the back of a device such as an iPhone. This could translate to being able to totally eliminate the need for physical buttons or at least physical buttons that could allow water in when emerged.

Under patent Point #49, Apple notes that acoustic touch could also work with other materials as well such as plastic and wood.