The U.S. Patent and Trademark Office officially published a series of 26 newly granted patents for Apple Inc. today. In this particular report we cover Apple's granted patent titled "Dual display equipment with enhanced visibility and suppressed reflections." The device presented in Apple's patent figure below illustrates a dual display notebook that eliminates a physical keyboard or Trackpad. This way the second display could also be used as a sketch pad, gaming controls and more as discussed in past patents.

Apple notes that in one version, a hinge is permanently holding the two displays together to form a new kind of MacBook.

In a second or alternative version, Apple notes that the hinge could be designed with magnetics so that it becomes a classic 2-in-1 device or second-gen iPad Pro so that the upper display could be detached and used as a standalone iPad. 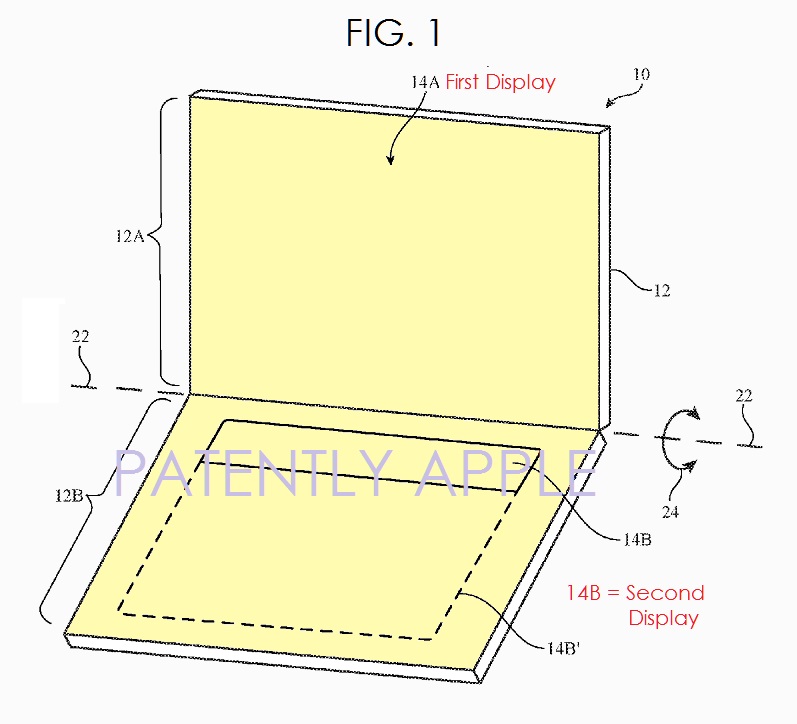 A hinge may allow upper housing 12A to rotate relative to lower housing 12B in directions 20 about axis #22. Housing 12A and housing 12B may be attached to each other using a permanent hinge arrangement (e.g., in a configuration in which device 10 is a laptop computer).

The patent also covers the ability to view content in this new invention while wearing sunglasses. For more details on this invention, see our original patent application report titled "Cool: Apple Invents a Dual Display MacBook that a User will be able to use Outdoors with Sunglasses on" that was posted a year ago.

Apple's granted patent 9,904,502 was originally filed in Q3 2015 and published today by the US Patent and Trademark Office.