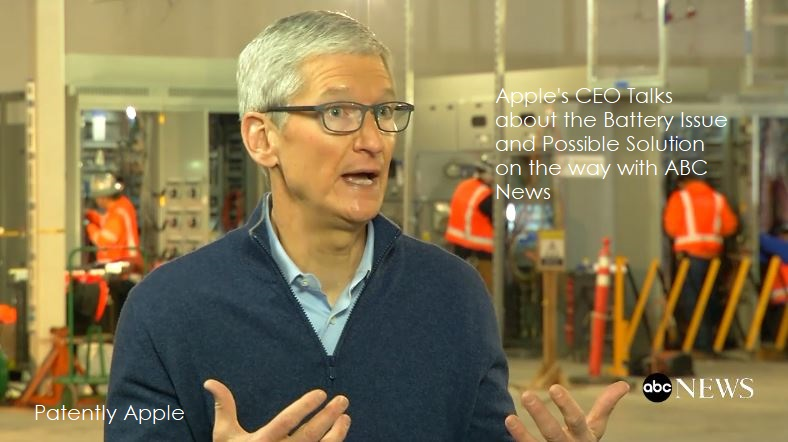 On January 18, 2018, Patently Apple posted a report titled "Cook In-Part blames Users for battery Issue but says an Update is coming that will allow users to Turn Off Battery Throttling." I noted in the report that "Apple's CEO Tim Cook spoke about the battery issue with ABC News last night amongst other things. In part, Cook blamed users for "not paying attention" to when Apple explained the battery policy update. To date no one has ever pointed out such an update that Cook is referring to and rather doubt that it was made clear or there wouldn't be any lawsuits." Today we're able to see that my commentary on Cook's statement was correct, as you'll learn more about it below.

Earlier on January 09 Sen. John Thune (R., S.D.), chairman of the Senate Commerce Committee, sent a letter to Apple's CEO Tim Cook outlining several questions about how Apple came to the decision to slow down iPhones in conjunction with battery wear. Below is Apple's official response to Senator Thune.

1 Apple's Response to Senator Thune by Jack Purcher on Scribd

Business Insider (BI) noted in a report today about Cook's timeline that has now changed. BI notes in their report that "in the timeline provided to the Senate, Apple acknowledges that the power management feature had been rolling out to customer iPhones for a month before it was added to the update's release notes or disclosed to the press.

Apple VP of public policy Cynthia Hogan stated that "We first delivered this power management feature to iPhone 6, iPhone 6 Plus, iPhone 6s, iPhone 6s Plus, and iPhone SE as part of iOS 10.2.1, in January 2017.

Once we verified that the feature was effective in avoiding unexpected shutdowns, we updated the iOS 10.2.1 ReadMe notes in February, 2017. Specifically, the iOS 10.2.1 ReadMe notes said that this update 'also improves power management during peak workloads to avoid unexpected shutdowns on iPhone," the Apple VP continued, also noting a press statement provided on Febuary 23 to several publications including Business Insider.

Republican Senator John Thune, who chairs the Senate Commitee on Commerce, Science, and Transportation, said in a statement that Apple has acknowledged that its initial disclosures of the software update "came up short."

"I appreciate Apple's response to my inquiry and the company's ongoing discussions with the committee," Thune said. "In those conversations, Apple has acknowledged that its initial disclosures came up short."

That's political correctness for calling Tim Cook's statement to the public via ABC News a convenient lie, which should anger more Apple fans and make those suing Apple feel good to wanting the company to pay for their lies and deceitful move. So it was never Apple customers "not paying attention," but rather Apple not making it known until well after the update and Read Me notes were released. Cook should apologize for accusing Apple iPhone customers for not paying attention. Apple's blanket apology didn't cover his recent statement – so we're waiting Mr. Cook.

Since the first of the month, it appears that another four class actions have been filed against Apple as noted below. In Apple's iOS 11.3 Beta there is new Battery Settings that Apple Explains on this page titled "iPhone Battery and Performance." Below is a screenshot of a new user interface you'll see in the future regarding this issue. 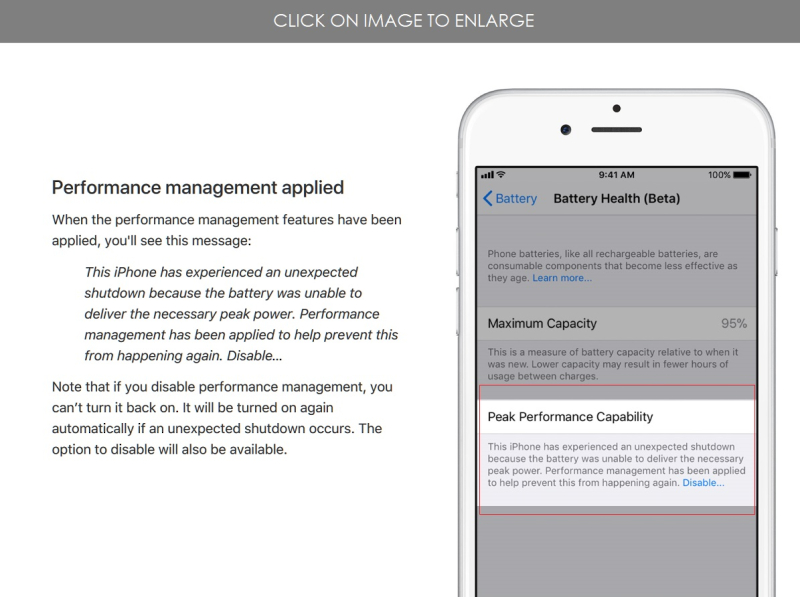