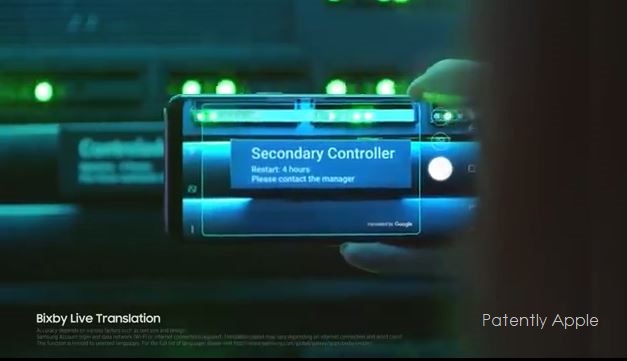 Later today Samsung will be introducing the Galaxy S9 to better help them compete with Apple's iPhone X. In early January we reported that their next-gen smartphone would use the Exynos9 that would support Face ID and Neural Network features. In February we reported on the rumor that Samsung would try to match Apple's Animoji with their version called '3D Emoji' and introduce a new camera that would support AR.

Earlier today, and before Samsung delivers their Galaxy S9 keynote in Barcelona, a sneak peek video has popped up that shows us a few more new features on the way.

The video shows us how Bixby + dual lens camera will use AR to deliver live translations of words captured by the camera. Their version of Face ID is in fact in place and in the front without using a notch design. Customers will be able to choose facial recognition or backside touch identification.

Samsung will also be introducing a special edition that is marketed as "The phone reimagined for business." The package includes Knox security, security updates for up to four years while reinventing DeX and DeX Pad (a dock) in a flat form factor so that the S9 will be a more powerful enterprise smartphone that doubles as a touch pad when connected to a larger display.

Earlier this month we reported that Samsung's S9 will be the first premium smartphone to open up the "LTE Gigabit Era." Should Samsung introduce other noteworthy features later today I may post a follow-up report.

As a side note, Huawei, who is now the number three smartphone in the world may introduce a new AI supported triple backside camera during a Paris event scheduled for March 27th.

Like Apple, Huawei doesn't like sharing the limelight with competitors at the annual Barcelona Mobile World Congress. Forbes reported earlier this month that Huawei's new P20 will indeed be the world's first smartphone with 3 rear cameras for a total resolution of 40 megapixels and capable of a 5X hybrid zoom (optical and digital), while the front of the device will feature an amazing 24 megapixels selfie camera (versus just 7 megapixels for the iPhone X), all co-developed with high-end German camera manufacturer Leica."