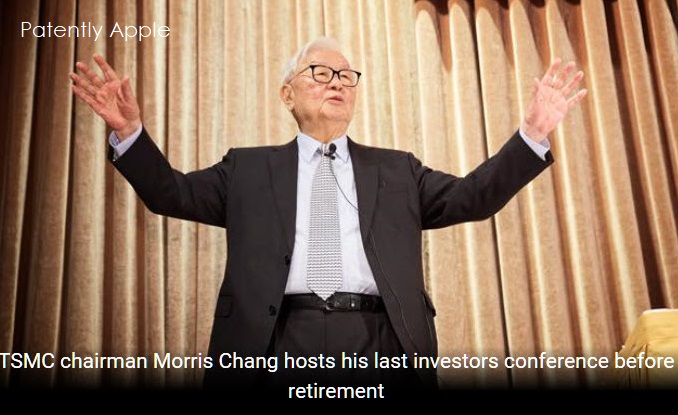 In January Patently Apple posted a report titled "Apple is Likely to launch their 2018 iPhone with a 7nm A12 Processor from TSMC." Earlier in November we reported that there was a rumor of Apple's iPad Pro would be the first iDevice to sport the all-new 7nm Processor." A new report today captures the excitement of TSMC's chairman announcing yesterday that this is the year of 7nm late yesterday.

According to TSMC's Chairman Morris Chang, the company will see its revenues grow 10-15% on year in 2018, mainly driven by the three major sectors of HPC (high performance computing), automotive electronics and IoT (Internet of Things) applications, and it has also secured a 100% market share in terms of 7nm process fabrication orders in the year.

Chang made the revelations at the firm's investors conference held January 18. This was the last conference of its kind chaired by Chang before his official retirement in mid-June. He concluded the meeting by saying "I will miss you" amid sustained clapping from the attendees.

Another powerful growth driver for TSMC rests with its 7nm process. The company has won orders from more than 50 customers for fabricating chips on 7nm process to support smartphones, gaming consoles, processors, AI applications, bitcoin mining, and more, leaving Samsung Electronics lagging far behind in the race of 7nm volume production.

TSMC expects its 7nm volume production to kick off in the second quarter of the year before peaking in the fourth quarter, with revenue ratio for 7nm process fabrication estimated to reach 10%, a level recorded for 10nm process in 2017. And the ratio for 10nm process is expected to rise further in 2018.